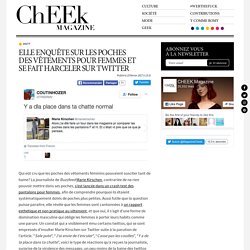 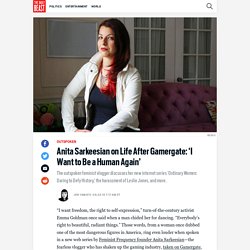 “I want freedom, the right to self-expression,” turn-of-the-century activist Emma Goldman once said when a man chided her for dancing. “Everybody’s right to beautiful, radiant things.” Those words, from a woman once dubbed one of the most dangerous figures in America, ring even louder when spoken in a new web series by Feminist Frequency founder Anita Sarkeesian—the fearless vlogger who has shaken up the gaming industry, taken on Gamergate, and is now more determined than ever to unsettle the patriarchy. DIY Feminist Cybersecurity. Your online accounts are points of access to your life both online and off. 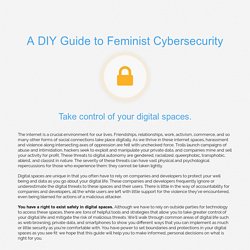 From email to social media to shopping, your accounts are crucial for pretty much everything you do through the internet. Spread out across these accounts is a treasure trove of personal data, credit card information, and even the ability to be “you” in online spaces. 100 Women 2015: Social media 'fuels gender violence' Mobile devices and the internet can be powerful tools, but they can also be weapons - the UN has issued a "wake-up call" about cyber violence against women. 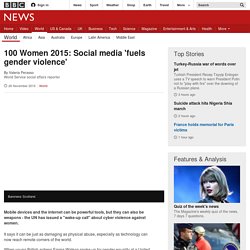 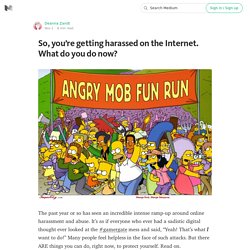 Let’s Call Female Online Harassment What It Really Is: Terrorism. Screenshot of a tweet sent to Anita Sarkeesian. 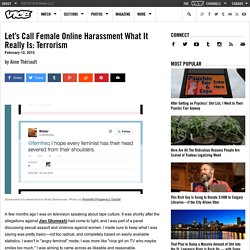 Photo via Feminist Frequency Tumblr A few months ago I was on television speaking about rape culture. It was shortly after the allegations against Jian Ghomeshi had come to light, and I was part of a panel discussing sexual assault and violence against women. Let’s call ‘trolling’ what it really is. By Whitney Phillips on May 10th, 2015 I started studying trolls in the summer of 2008, just before I began my Ph.D. program at the University of Oregon. 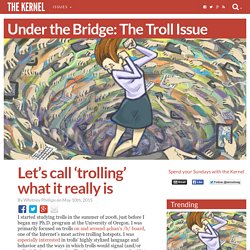 I was primarily focused on trolls on and around 4chan’s /b/ board, one of the Internet’s most active trolling hotspots. I was especially interested in trolls’ highly stylized language and behavior and the ways in which trolls would signal (and/or police) their mastery of trolling language, memes, and raids to other self-identifying trolls.

And what an identity it was. Known for their explicitly racist, explicitly sexist, and explicitly, well, explicit exploits, the trolls I studied reveled in mischief, vulgarity, and things that cannot be unseen. Anita Sarkeesian and the Workings of Power. Sociologists are interested in the workings of power. 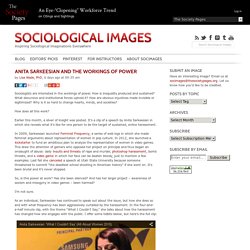 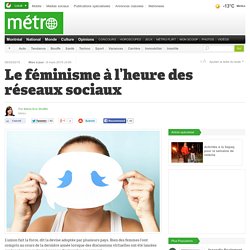 This Is What Happens When Women Actually Accept A Compliment From A Man Online. Watch Famous Feminists Read Mean Tweets About Themselves. Ever wonder what it's really like to be a feminist? 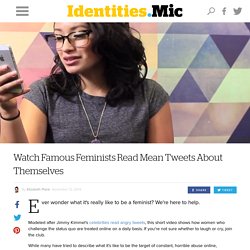 We're here to help. Modeled after Jimmy Kimmel's celebrities read angry tweets, this short video shows how women who challenge the status quo are treated online on a daily basis. If you're not sure whether to laugh or cry, join the club. While many have tried to describe what it's like to be the target of constant, horrible abuse online, sometimes it's easier to just show, not tell. When it comes being trolled, many people on the Internet have it bad. Indeed, recent Pew Research Center data show that although men receive their share of online harassment, the harassment women experience is often more abusive, ranging from stalking to sexual harassment and even threats of physical harm.

And you don't even need to have any particular level of fame to get harassed. Join Feminists Taking a Stand Against ‘Cyberbullying Bill’ C-13. Cybermisogyny is an issue I take incredibly seriously. I’ve been a target occasionally and only once to the extent I felt I had to call the police, but I know far, far too many women who live in fear of having their private images shared online by vengeful exes, who have been hounded from their homes by threats and/or who deal with “always-on stalkers”, and all this while having no confidence that our legal system will care. It has to stop. We need action from our governments. But the Conservatives’ Bill C-13, the so-called “Cyberbullying Bill,” is not the solution, not in its current form. Earlier this year the West Coast Legal Education and Action Fund (West Coast LEAF) put out an in-depth report on what needs to happen to tackle cybermisogyny in Canada.

“I realized, as many Canadians realized, that most of Bill C-13 is not really about what happened to Rehtaeh Parsons. Anita Sarkeesian, Feminist Frequency - XOXO Festival (2014) Cyber Harassment: Yes, It is a Woman’s Thing. In response to yesterday’s post, commentators questioned whether cyber harassment is a gendered problem. The answer is yes. While cyber attackers target men (see my post here), more often their victims are female. According to a University of Maryland study, online users who appear female are 25 times more likely to receive threats and sexually explicit messages than online users with male names. The disproportionate targeting of women accords with statistics compiled by the organization Working to Halt Online Abuse (WHOA). In 2007, 61 percent of the individuals reporting online abuse to WHOA were female while 21 percent were male. 2006 followed a similar pattern: 70 percent of those reporting online harassment identified themselves as women.

3 Reasons Why Internet Harassment Is Not ‘Freedom of Speech’ If I wanted to, I could walk up to a stranger on the street right now and threaten to kill them. That isn’t a good reason to threaten to kill someone, but I totally could if I wanted—never mind the fact that the person I threaten might actually feel unsafe or tell me off as a result. This is the kind of thinking I imagine dominates the minds of people who feel the need to defend their right to say whatever they want online, be it hate speech, rape threats, death threats, you name it. If you’ve spent more than two minutes on the Internet, you’ve probably seen what I’m talking about—trolling, bullying, insincere but deliberately hurtful comments, and other things that no one would say to another person’s face offline. What’s more, the problem of online harassment is one that disproportionately affects marginalized people.

Case in point—an entire fake Twitter campaign dedicated to attacking feminists of color. 1. Jezebel’s Harassment Problem Needs More than Comment Moderation. The editors of Jezebel did a really brave thing yesterday and called out their parent company, Gawker Media for not dealing with a very serious and persistent abuse and harassment problem. For months now, waves of violent pornography gifs have been posted to Jezebel stories using anonymous accounts untied to IP addresses or any other identifiable information. That means it’s effectively impossible to stop abusive people from posting to the site. Instead, Jezebel writers and editors have to delete the posts themselves, hopefully before too many of their readers see them. People higher up on the Gawker masthead have known about this issue and have, through inaction, forced their co-workers to look at this horrific and potentially triggering content instead of dealing with the problem.

Or, on commence à le savoir, le cyberespace n’est pas étanche aux autres dimensions que nous habitons, et dans bien des cas, ce rêve égalitaire a fait long feu. Mais les rappels à la réalité peuvent être violents. Dissent Unheard Of, by Ashe Dryden. I'm moderately well-known for the disagreements I get into on the internet. I’m working on one of the hardest problems I’ve ever tried to solve as a programmer: the lack of diversity in tech. This means I read a lot of research, sociology, philosophy, and the history of sociopolitical movements.

I write often, speak all over the world, and critique current events affecting the inequalities in the industry. Baisse les yeux. Tais-toi. Ravale ta colère et déglutis tes larmes. Baisse les yeux. « Shitstorm en vue ma jolie »   Quand la toile devient menaçante. Image: Istockphoto. This Teenage Artist Was Bullied Off Of Tumblr After Making A Webcomic About White Privilege. The Problem with "Don't Feed the Trolls": Steph Guthrie at TEDxToronto. The 7 Deadly Myths of Online Violence Against Women. By Jessica Spence (@jmspence) and Steph Guthrie (@amirightfolks) WiTOpoli does a great portion of its advocacy and activism work online. As part of this work, we have come to have a much better understanding of what happens online and have often been asked to speak about it. Ads Reveal Horrifying Sexism in Google Autocomplete. Have you ever tried typing "women should," "women shouldn't" or "women can't" into Google?

The autocomplete suggestions you get may surprise and horrify you, as a new series of ads from UN Women makes abundantly clear. Google autocomplete is a feature that suggests what your search term might be, based on its most frequent searches and the content of web pages. It is, in many ways, a neutral reflection of society. The 7 Deadly Myths of Online Violence Against Women. 6 Insidious Ways Social Media Can Be Used to Silence Women. There are many dynamic web 2.0 features that allow for the compilation of data in interesting ways.

Ask.fm, for example, allows a platform for anonymous questions and is great for a "get to know you" low-stakes situation. XoJane. Loi de Lewis : quand les commentaires illustrent le sexisme. It Happened To Me: My Online Dating Profile Inspired A Whole Forum Thread Dedicated To What A Whore I Am. The false paradox: freedom of expression and sexist hate speech. When we talk about freedom of expression we are within the paradigm of human rights. Why I’m Supporting the #FBrape Campaign. Facebook users are asking advertisers whether they really want their logos to be seen alongside jokes and threats about beating and raping women. Canadian feminist activist receives death threats and other abuse after being targeted by Men’s Rights Activists. Merci les trolls. Internet Rules and Laws 2.0. Does Facebook have a problem with women?

Harassment via Wikipedia Vandalism. Feminist Take on Games Draws Crude Ridicule, Massive Support. Image Based Harassment and Visual Misogyny. This is what online harassment looks like. Does Felicia Day Matter At All? (Yes)