2020 Predictions -Model for Future Innovations. Filed under applications, consumer behavior, internet behavior, Internet of Things, location, mobile web, Predictions, purchase, Trend Spotting Behavior, trends, Trends Review Based on the concept of “The Internet of Things” TrendsSpotting has developed a working model for NPD. ”The ANA Model” was developed and implemented while working with tech companies, and allows us to predict future products and services. The “ANA Model” identifies the process where data is collected from reported “Actions”, then delivered to predefined monitor systems or professionals by “Notifications”. The outcomes can “Alert” people through a visualized system. Few daily activities are presented to reflect the process. The ANA model can not only predict potential products and services (shopping, health, transportation, advertising etc) but can suggest new professions to rise. 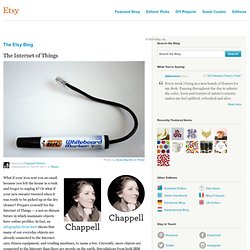 Or what if your new sweater tweeted when it was ready to be picked up at the dry cleaner? Prepare yourself for the Internet of Things — a not-so distant future in which inanimate objects have online profiles. In fact, an infographic from Intel shows that many of our everyday objects are already connected to the Internet: cars, fitness equipment, and vending machines, to name a few. Currently, more objects are connected to the Internet than there are people on the earth. Speculations from both IBM and Cisco believe there will be upwards of 1 trillion connected devices by 2015. If you want to know who’s at the forefront of this technological future, look no further than a herd of Dutch cattle. Cows are just the beginning.

Paul Malon on Flickr A 1947 advertisement for the latest appliances that will give mom more free time. Too often we are convinced that technology will make our lives easier. The Internet of Things & energy — Cleantech News and Analysis. Newsroom_UK_InternetOfThings_1024x1448.jpg (1024×1448)

The Next Boom in Mobile Devices Is the Car. The Internet Gets Physical. But now — nothing personal, mind you — the Internet is growing up and lifting its gaze to the wider world. 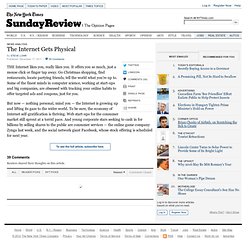 To be sure, the economy of Internet self-gratification is thriving. Web start-ups for the consumer market still sprout at a torrid pace. And young corporate stars seeking to cash in for billions by selling shares to the public are consumer services — the online game company Zynga last week, and the social network giant Facebook, whose stock offering is scheduled for next year. As this is happening, though, the protean Internet technologies of computing and communications are rapidly spreading beyond the lucrative consumer bailiwick. Low-cost sensors, clever software and advancing computer firepower are opening the door to new uses in energy conservation, transportation, health care and food distribution.

Disruptions: Wearing Your Computer on Your Sleeve. Adrian Dennis/Agence France-Presse — Getty ImagesInstead of going through life staring into a mobile device, people one day may be able to wear a computer. 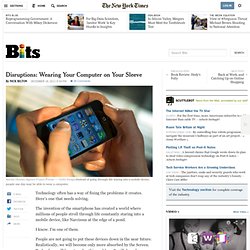 Technology often has a way of fixing the problems it creates. Here’s one that needs solving. The invention of the smartphone has created a world where millions of people stroll through life constantly staring into a mobile device, like Narcissus at the edge of a pond. I know. I’m one of them. People are not going to put these devices down in the near future. Wearable computing is a broad term. Over the last year, Apple and Google have secretly begun working on projects that will become wearable computers. In Google’s secret Google X labs, researchers are working on peripherals that — when attached to your clothing or body — would communicate information back to an Android smartphone.

Apple has also experimented with prototype products that could relay information back to the iPhone. At least, I hope that’s what he would see. By 2020, the planet will have 24 billion connected devices – Infographic! It’s Infographic time thanks to the team at the GSMA. 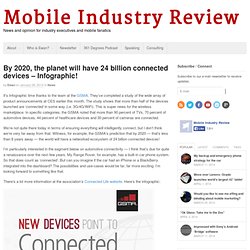 They’ve completed a study of the wide array of product announcements at CES earlier this month. The study shows that more than half of the devices launched are ‘connected‘ in some way (i.e. 3G/4G/WiFi). This is super news for the wireless marketplace. Connected Personal Objects: Getting Intimate with the Internet of T... Google Glass and the Future of Wearable Computing. Of Bears, Bats, and Bees: Making Sense of the Internet of Things. By Scott Jenson - August 1, 2012 The Internet of Things (or IoT) is finally going mainstream. 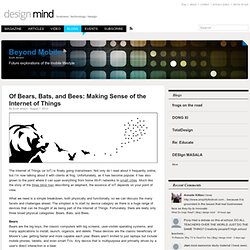 Not only do I read about it frequently online, but I’m now talking about it with clients at frog. Unfortunately, as it has become popular, it has also grown to the point where it can span everything from home Wi-Fi networks to smart cities. Internet of Things. The Internet of Things (IoT) is the network of physical objects or "things" embedded with electronics, software, sensors and connectivity to enable it to achieve greater value and service by exchanging data with the manufacturer, operator and/or other connected devices. 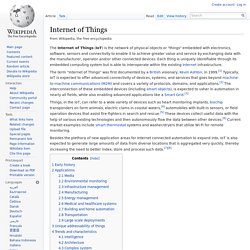 Each thing is uniquely identifiable through its embedded computing system but is able to interoperate within the existing Internet infrastructure. The term “Internet of Things” was first documented by a British visionary, Kevin Ashton, in 1999.[1] Typically, IoT is expected to offer advanced connectivity of devices, systems, and services that goes beyond machine-to-machine communications (M2M) and covers a variety of protocols, domains, and applications.[2] The interconnection of these embedded devices (including smart objects), is expected to usher in automation in nearly all fields, while also enabling advanced applications like a Smart Grid.[3] Early history[edit] In its original interpretation,[when?] Media[edit] The Internet of Things. In most organizations, information travels along familiar routes. Proprietary information is lodged in databases and analyzed in reports and then rises up the management chain.

Information also originates externally—gathered from public sources, harvested from the Internet, or purchased from information suppliers. But the predictable pathways of information are changing: the physical world itself is becoming a type of information system. In what’s called the Internet of Things, sensors and actuators embedded in physical objects—from roadways to pacemakers—are linked through wired and wireless networks, often using the same Internet Protocol (IP) that connects the Internet. These networks churn out huge volumes of data that flow to computers for analysis. Pill-shaped microcameras already traverse the human digestive tract and send back thousands of images to pinpoint sources of illness. Podcast When virtual-world capabilities meet real-world businesses. Are you ready for the Internet of Things?