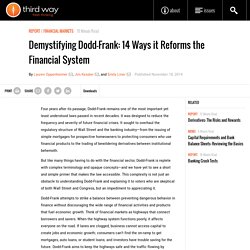 It was designed to reduce the frequency and severity of future financial crises. It sought to overhaul the regulatory structure of Wall Street and the banking industry—from the issuing of simple mortgages for prospective homeowners to protecting consumers who use financial products to the trading of bewildering derivatives between institutional behemoth. But like many things having to do with the financial sector, Dodd-Frank is replete with complex terminology and opaque concepts—and we have yet to see a short and simple primer that makes the law accessible. This complexity is not just an obstacle to understanding Dodd-Frank and explaining it to voters who are skeptical of both Wall Street and Congress, but an impediment to appreciating it. Overly restrictive rules can make highways work sub-optimally. 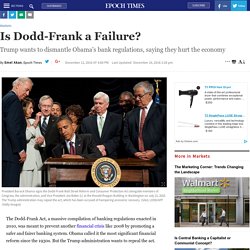 Obama called it the most significant financial reform since the 1930s. But the Trump administration wants to repeal the act. “The proponents of Dodd-Frank promised that it would lift our economy. Yet now, six years later, the American people remain stuck in the slowest, weakest, most tepid recovery since the Great Depression,” President-elect Donald Trump stated on his website. Trump’s pledge to dismantle the law was welcomed by banks, especially smaller ones that have been hurt most by the costs resulting from regulation.

Since the election, financial stocks have rallied on the prospect of a strong economy and deregulation, outperforming the other sectors. “We are delighted,” said Jay Sidhu, chairman and CEO of Customers Bank, a community bank headquartered in Wyomissing, Pennsylvania. How the Decline in Community Banks Hurts Small Business. A recent report from the Federal Reserve Bank of Richmond reveals that the number of community banks dropped by a whopping 41 percent between 2007 and 2013. 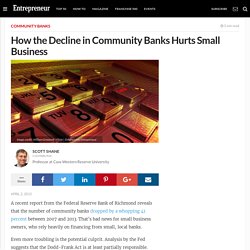 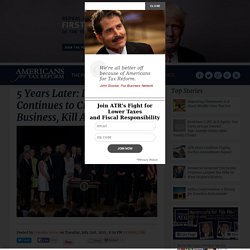 In the letter, addressed to House Speaker Paul Ryan (R-Wis.) and Ways and Means Chairman Kevin Brady (R-Texas), the coalition urges significant progress to be made in the first hundred days of the Trump administration: “Given the importance of this issue, we believe it is imperative that the House of Representatives make significant progress in the first hundred days of the Trump administration toward passing comprehensive, pro-growth tax reform. “Passage of tax reform that simplifies and updates the code is key toward encouraging economic growth, creating more jobs and higher wages, and promoting innovation and ingenuity. The full letter is below and can be found here.

February 6, 2017. Warren: Dodd-Frank Rules Aren't Hurting Small Banks Very Much. Final State and Fate Lux Greene. Commentary: How the Dodd-Frank Act hurts small businesses. By Javier Palomarez By Javier Palomarez March 25, 2012 Most economists and policymakers have traced the origins of our current economic downturn to the offering of high risk mortgages to millions of Americans. 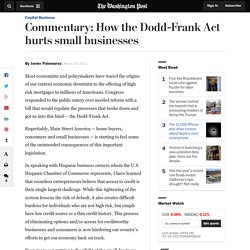 Congress responded to the public outcry over needed reform with a bill that would regulate the processes that broke down and got us into this bind — the Dodd-Frank Act. Regrettably, Main Street America — home buyers, consumers and small businesses — is starting to feel some of the unintended consequences of this important legislation. In speaking with Hispanic business owners whom the U.S. Hispanic Chamber of Commerce represents, I have learned that countless entrepreneurs believe that access to credit is their single largest challenge. Dear White House: Here's What Community Banks and Credit Unions Are Saying About Dodd-Frank. Like Captain Renault, Americans are shocked – SHOCKED – that a report by the White House says a law supported by the White House doesn’t hurt community banks, no matter what. 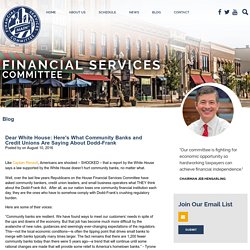 Well, over the last few years Republicans on the House Financial Services Committee have asked community bankers, credit union leaders, and small business operators what THEY think about the Dodd-Frank Act. After all, as our nation loses one community financial institution each day, they are the ones who have to somehow comply with Dodd-Frank’s crushing regulatory burden. Here are some of their voices: Is Dodd-Frank Really Killing Community Banks? - TheStreet. With Republicans claiming that bank regulations have forced many community banks to close and politicians on both sides of the aisle calling for different regulations, it's worth examining how Dodd-Frank actually affects small banks. 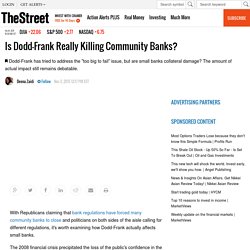 The 2008 financial crisis precipitated the loss of the public's confidence in the banking industry. Post-crisis, banks did little to restore that lost trust. Owing to the number of bank bailouts during the global financial meltdown, it became evident that big banks carried huge associated systemic risks in case of their failure. Such huge bailouts not only came with an individual problem of "too big to fail," but also raised serious concerns of moral hazard. However, the government took various steps to control the way big and small banks functioned in order to ensure that the history of bank bailouts is not repeated. Peirce SmallBankSurvey v1. Forbes Welcome. Yes, community banks are struggling under Dodd-Frank.

In their zeal to defend President Obama’s signature financial legacy, the Dodd-Frank Act, the White House and its allies are pushing what must now be thought of as an urban legend: the myth that community banks are thriving under Dodd-Frank. 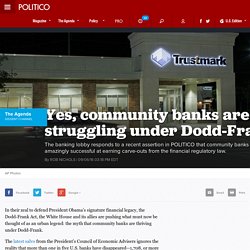 The latest salvo from the President’s Council of Economic Advisers ignores the reality that more than one in five U.S. banks have disappeared—1,708, or more than one every business day—since Dodd-Frank was enacted. Meanwhile, virtually no new banks have been formed, a historically unprecedented lack of investment and startup activity for the industry. Then there’s a recent Politico op-ed from think tank fellow Mike Konczal arguing that community banks are at the zenith of their political power and able to bend Capitol Hill to their demands—another head-scratcher for anyone actually fighting in the policy trenches. The wave of new regulations that have been imposed on community banks is an enormous driver of decisions to sell to a larger bank. Dodd-Frank’s Effect on Small Banks is Muted - WSJ. Dodd-Frank Is Hurting Community Banks. Marshall Lux is a senior fellow and Robert Greene is a research associate at the Mossavar-Rahmani Center for Business and Government at Harvard's John F. 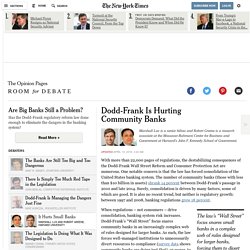 Kennedy School of Government. With more than 22,000 pages of regulations, the destabilizing consequences of the Dodd-Frank Wall Street Reform and Consumer Protection Act are numerous. One notable concern is that the law has forced consolidation of the United States banking system. The number of community banks (those with less than $10 billion in assets) shrank 14 percent between Dodd-Frank’s passage in 2010 and late 2014. Surely, consolidation is driven by many factors, some of which are good. The law’s “Wall Street” focus snares small banks in a complex web of rules designed for larger banks, forcing them to divert resources to compliance, or worse, to close their doors. 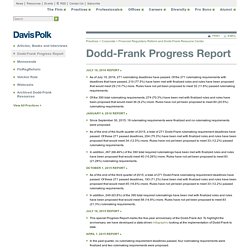 Contents Origins and proposal[edit] Share in GDP of U.S. financial sector since 1860[6] The financial crisis of 2007–10 led to widespread calls for changes in the regulatory system.[7] In June 2009, President Obama introduced a proposal for a "sweeping overhaul of the United States financial regulatory system, a transformation on a scale not seen since the reforms that followed the Great Depression".[8] At President Obama's request, Congress later added the Volcker Rule to this proposal in January 2010.[10] Overview[edit]