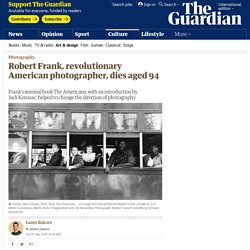 The Swiss-born photographer’s seminal book The Americans, which had an introduction from Jack Kerouac, beat generation author of On the Road, helped to change the direction of photography with its 83 pictures rejecting many conventions of the art form up to that point. Shot on a Leica 35mm camera, the black-and-white images are considered Frank’s masterwork and focused on figures from the overlooked margins of American life – from teenage couples and factory workers to bikers. The Unseen Robert Frank: Outtakes From ‘The Americans’ Robert Frank, Valuing the Image Over the Object. 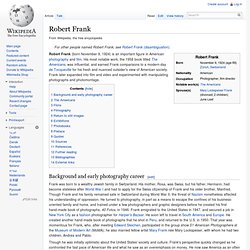 His mother, Rosa, was Swiss, but his father, Hermann, had become stateless after World War I and had to apply for the Swiss citizenship of Frank and his older brother, Manfred. Though Frank and his family remained safe in Switzerland during World War II, the threat of Nazism nonetheless affected his understanding of oppression. He turned to photography, in part as a means to escape the confines of his business-oriented family and home, and trained under a few photographers and graphic designers before he created his first hand-made book of photographs, 40 Fotos, in 1946. Frank emigrated to the United States in 1947, and secured a job in New York City as a fashion photographer for Harper's Bazaar. The Americans[edit] Robert Frank's noted book, The Americans (1958) “I remember the guy [policeman] took me into the police station, and he sat there and put his feet on the table. 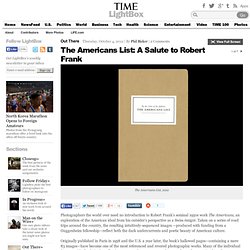 Taken on a series of road trips around the country, the resulting intuitively-sequenced images —produced with funding from a Guggenheim fellowship—reflect both the dark undercurrents and poetic beauty of American culture. Originally published in Paris in 1958 and the U.S. a year later, the book’s hallowed pages—containing a mere 83 images—have become one of the most referenced and revered photographic works. Many of the individual frames reside firmly in the collective memory of contemporary photographers who consciously and subconsciously reference the images on a daily basis.

In 2009, Eskenazi—himself the recipient of a Guggenheim fellowship—was working as a security guard at the Metropolitan Museum in New York. Clark Winter Nova Scotia September, 2012 Jason Eskenazi is a Istanbul based photographer. ROBERT FRANK: “A Statement” (1958. Detroit River Rouge Plant, 1955 By Robert Frank, U.S. 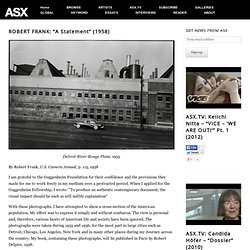 Camera Annual, p. 115, 1958 I am grateful to the Guggenheim Foundation for their confidence and the provisions they made for me to work freely in my medium over a protracted period. When I applied for the Guggenheim Fellowship, I wrote: “To produce an authentic contemporary document, the visual impact should be such as will nullify explanation” With these photographs, I have attempted to show a cross-section of the American population. I have been frequently accused of deliberately twisting subject matter to my point of view. My photographs are not planned or composed in advance and I do not anticipate that the on-looker will share my viewpoint. It is a different state of affairs for me to be working on assignment for a magazine. I have a genuine distrust and “mefiance” toward all group activities. 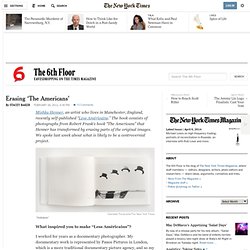 The book consists of photographs from Robert Frank’s book “The Americans” that Henner has transformed by erasing parts of the original images. We spoke last week about what is likely to be a controversial project. Gabrielle Plucknette/The New York Times“Hoboken” What inspired you to make “Less Américains”? I worked for years as a documentary photographer. Gabrielle Plucknette/The New York Times So when it came to thinking about a new body of work, I wanted to do something that was in some ways about the photo book as much as about documentary photography, and Frank’s “Americans” is kind of the bible of a certain idea of documentary photography if you like. Gabrielle Plucknette/The New York Times“U.S. 90″ Were you hesitant to alter something that’s considered such a sacred body of work? I have to say when I first started working on it, I didn’t think I could do this. Robert Frank (Photographer, b 1924 Switzerland) is... - An afternoon in the Museum of Modern Art.