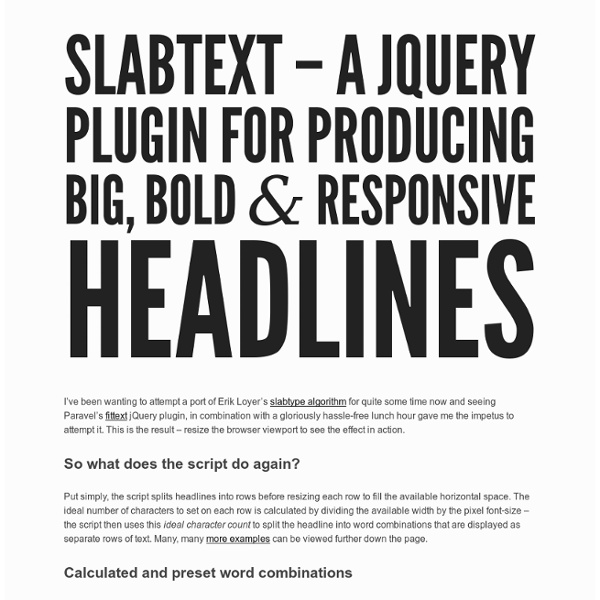 I’ve been wanting to attempt a port of Erik Loyer’s slabtype algorithm for quite some time now and seeing Paravel’s fittext jQuery plugin, in combination with a gloriously hassle-free lunch hour gave me the impetus to attempt it. This is the result – resize the browser viewport to see the effect in action. So what does the script do again? Put simply, the script splits headlines into rows before resizing each row to fill the available horizontal space. The ideal number of characters to set on each row is calculated by dividing the available width by the pixel font-size – the script then uses this ideal character count to split the headline into word combinations that are displayed as separate rows of text. Calculated and preset word combinations While the script does an admirable job at automating the creation of the individual rows, there are certainly situations in which you would choose to control the word combinations used to split the headline. Headers containing links Plugin options Related:  Javascript • JS

remybach/jQuery.superLabels - GitHub Home Responsive-content A jQuery plugin that helps you serve different content to different devices. Responsive Content is used to load content that is appropriate to the current device's screen size. It is typically used alongside Responsive Design techniques. Note however that Responsive Design and Responsive Content act on different levels: given a particular screen width, the former applies a particular styling to the same content - whereas the latter actually loads different content. It can be used subtly - for example to cause smaller images to be loaded on smaller devices - or to deliver radically different content to different screen widths or device capabilities. How it works Responsive Content is a coarse-grained content loader, designed to pull an entire block of HTML into the "content" area of a page. The content is loaded as a single HTML fragment using Ajax and inserted into a specified container element. Design Criteria The approach meets these critical criteria: Client Side For example: Server Side

Analog or digital You may have noticed that we’re fond of a bit of retro, so it was hard to resist this pixelated music video from Wildlife Control… from their blog: We were tinkering around with the SoundCloud API late one night several weeks ago and realized we could use the timing events and track comments to make something cool. At the time, we were thinking it would be a quick little animated ASCII thing. After digging in a little more, we decided to go way bigger. Each jumbo pixel in the grid is a plain old <div> with a coloured background, while scenes are broken down into reusable sprites to keep things snappy. Cute 8-bit dinosaurs, robots & zombie dogs all make an appearance, with SoundCloud comments embedded at the correct time-index – a nice touch. I strongly suspect there’s some nice tooling behind this, if the large arrays of data in the source are anything to go by. The song isn’t half bad, either Analog or digital – Wildlife control

scrollorama Disclaimer: This is an experimental, just-for-fun sort of project and hasn’t been thoroughly tested. Design and build your site, dividing your content into blocks. Embed scrollorama.js after jQuery and initialize the plugin, passing the blocks class selector as a parameter. Target an element and animate its properties. The animation parameters you can use are: Hook into the onBlockChange event. scrollorama.onBlockChange(function() { alert('You just scrolled to block#'+scrollorama.blockIndex); }); Note: If you are not using the pinning feature, it is recommended you disable it.

Web-Drawing Throwdown: Paper.js Vs. Processing.js Vs. Raphael Advertisement Before drawing anything in a browser, ask yourself three questions: Do you need to support older browsers?If the answer is yes, then your only choice is Raphaël. Paper.js, Processing.js and Raphaël are the leading libraries for drawing on the Web right now. Choosing the right framework will determine the success of your project. All of the code in this article is open source and can be run on the demo page that accompanies this article. Overview It’s all JavaScript once the page runs, but the frameworks take different paths to get there. PaperScript is a JavaScript extension that makes it possible to write scripts that don’t pollute the global namespace. Processing.js is based on a framework named Processing, which runs in the Java Virtual Machine. Using all three libraries is easy if you have some familiarity with JavaScript. Getting Started Start by importing each library. Setting Up Paper.js Setting Up Processing.js Setting Up Raphaël Now we can start drawing. Paper.js: Raphaël:

Timeline JS - Beautifully crafted timelines that are easy, and intuitive to use. jQuery Menu: Dropdown, iPod Drilldown, and Flyout styles with ARIA Support and ThemeRoller Ready Posted by Maggie on 04/02/2009 Topics: css jQuery jQuery UI ThemeRoller ui design Update: We contributed this menu plugin to the jQuery UI library. We got lots of fantastic feedback on our earlier iPod-style menu, and decided to upgrade it for jQuery 1.3. As noted in our original post, the iPod-style menu provides easy navigation of complex nested structures with any number of levels. Much of the functionality that controls the iPod style menu, like positioning and option selection, is shared by dropdown and flyout menus which are better suited for smaller data sets, so we extended the script to include support for these additional menu types. We also built in the ability to customize a menu's appearance, including active and hover states, by passing in classes as options. By default, the menu script will transform an unordered list of links into a simple dropdown menu: Demo Page When the menu content contains nested lists, by default it creates an iPod-style menu: Demo Page Demo Page How it works