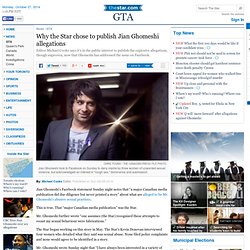 Ghomeshi’s abusive sexual practices. This is true. That “major Canadian media publication” was the Star. Mr. Ghomeshi further wrote “one assumes (the Star) recognized these attempts to recast my sexual behaviour were fabrications.” The Star began working on this story in May. Mr. The reason The Star did not publish a story at that time was because there was no proof the women’s allegations of non-consensual abusive sex were true or false. Ghomeshi taking ‘undetermined’ leave from CBC for ‘personal time’ “Q” radio host Jian Ghomeshi says he is taking some “much needed personal time” away from the CBC. 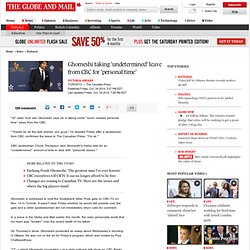 “Thanks for all the well wishes, you guys,” he tweeted Friday after a spokesman from CBC confirmed the leave to The Canadian Press. “I’m ok.” CBC spokesman Chuck Thompson said Ghomeshi’s hiatus was for an “undetermined” amount of time to deal with “personal issues.” Ghomeshi is scheduled to host the Scotiabank Giller Prize gala on CBC-TV on Nov. 10 in Toronto. It wasn’t clear Friday whether he would still preside over the gala and a Giller spokeswoman did not immediately return calls for comment. In a piece in the Globe and Mail earlier this month, the radio personality wrote that his heart was “broken” over the recent death of his father. On Thursday’s show, Ghomeshi presented an essay about Wednesday’s shooting in Ottawa.

Ghomeshi defends sex life, plans to sue CBC over firing. The Canadian Broadcasting Corporation dismissed Jian Ghomeshi after receiving information it says “precludes” the corporation from continuing to employ one of its biggest stars. 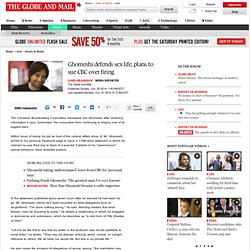 Within hours of losing his job as host of the cultural affairs show Q, Mr. Ghomeshi turned to his personal Facebook page to issue a 1,586-word statement in which he claimed he was fired due to fears of a scandal if details of his “adventurous” sexual behaviour were revealed publicly. In the statement, published about seven hours after he learned he had been let go, Mr. CBC fires Jian Ghomeshi over sex allegations. CBC star Jian Ghomeshi has been fired over “information” the public broadcaster recently received that it says “precludes” it from continuing to employ the 47-year-old host of the popular Q radio show. 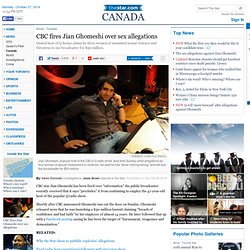 Shortly after CBC announced Ghomeshi was out the door on Sunday, Ghomeshi released news that he was launching a $50-million lawsuit claiming “breach of confidence and bad faith” by his employer of almost 14 years. He later followed that up with a Facebook posting saying he has been the target of “harassment, vengeance and demonization.” Over the past few months the Star has approached Ghomeshi with allegations from three young women, all about 20 years his junior, who say he was physically violent to them without their consent during sexual encounters or in the lead-up to sexual encounters. Ghomeshi, through his lawyer, has said he “does not engage in non-consensual role play or sex and any suggestion of the contrary is defamatory.” 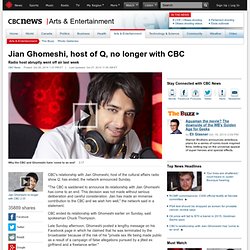 "The CBC is saddened to announce its relationship with Jian Ghomeshi has come to an end. This decision was not made without serious deliberation and careful consideration. Jian has made an immense contribution to the CBC and we wish him well," the network said in a statement. CBC ended its relationship with Ghomeshi earlier on Sunday, said spokesman Chuck Thompson. Late Sunday afternoon, Ghomeshi posted a lengthy message on his Facebook page in which he claimed that he was terminated by the broadcaster because of the risk of his "private sex life being made public as a result of a campaign of false allegations pursued by a jilted ex girlfriend and a freelance writer.

" The Toronto Star published a story on the topic. “After this, in the early spring there began a campaign of harassment, vengeance and demonization against me that would lead to months of anxiety.”