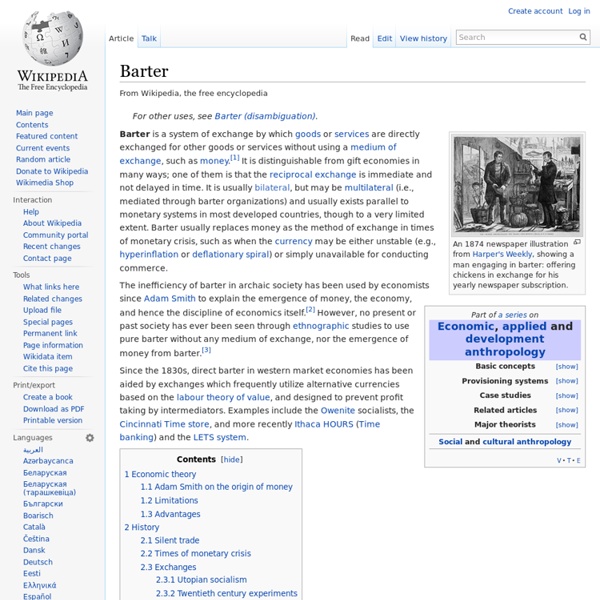 An 1874 newspaper illustration from Harper's Weekly, showing a man engaging in barter: offering chickens in exchange for his yearly newspaper subscription. The inefficiency of barter in archaic society has been used by economists since Adam Smith to explain the emergence of money, the economy, and hence the discipline of economics itself.[2] However, no present or past society has ever been seen through ethnographic studies to use pure barter without any medium of exchange, nor the emergence of money from barter.[3] Since the 1830s, direct barter in western market economies has been aided by exchanges which frequently utilize alternative currencies based on the labour theory of value, and designed to prevent profit taking by intermediators. Examples include the Owenite socialists, the Cincinnati Time store, and more recently Ithaca HOURS (Time banking) and the LETS system. Economic theory[edit] Adam Smith on the origin of money[edit] Limitations[edit] Absence of common measure of value Related:  Economic Theory of Value

Communism Communism is represented by a variety of schools of thought, which broadly include Marxism, anarchism and the political ideologies grouped around both. All these hold in common the analysis that the current order of society stems from its economic system, capitalism, that in this system, there are two major social classes: the proletariat - who must work to survive, and who make up a majority of society - and the capitalist class - a minority who derive profit from employing the proletariat, through private ownership of the means of production, and that political, social and economic conflict between these two classes will trigger a fundamental change in the economic system, and by extension a wide-ranging transformation of society. The primary element which will enable this transformation, according to communism, is the social ownership of the means of production. Because of historical peculiarities, communism is commonly erroneously equated to Marxism-Leninism in mainstream usage.

Barter System History The Past and Present If you've ever swapped one of your toys with a friend in return for one of their toys, you have bartered. Bartering is trading services or goods with another person when there is no money involved. This type of exchange was relied upon by early civilizations. There are even cultures within modern society who still rely on this type of exchange. What is a Barter System? A barter system is an old method of exchange. History of Bartering The history of bartering dates all the way back to 6000 BC. Due to lack of money, bartering became popular in the 1930s during the Great Depression. Disadvantages and Advantages of Bartering Just as with most things, there are disadvantages and advantages of bartering. On the positive side, there are great advantages to bartering. Another advantage of bartering is that you do not have to part with material items. By Kelly Anderson

Local exchange trading system A local exchange trading system (also local employment and trading system or local energy transfer system; abbreviated to LETS or LETSystem) is a locally initiated, democratically organised, not-for-profit community enterprise that provides a community information service and record transactions of members exchanging goods and services by using the currency of locally created LETS Credits.[1] History[edit] Michael Linton originated the term "local exchange trading system" in 1983 and for a time ran the Comox Valley LETSystems in Courtenay, British Columbia.[2] The system he designed was intended as an adjunct to the national currency, rather than a replacement for it,[3] although there are examples of individuals who have managed to replace their use of national currency through inventive usage of LETS. A number of people have problems adjusting to the different ways of operating using a LETSystem. Criteria[edit] Of these criteria, "equivalence" is the most controversial. Operation[edit]

Barter Exchange System Thirdly, the barter system lacks any satisfactory unit to engage in contracts involving future payments. Contracts requiring future payments are commonplace in any exchange economy - we enter into agreements regarding wages, salaries, interests, rents etc. and other prices extending over a period of time. In a barter economy future payments would have to be stated in terms of specific goods or services. This leads to the following problems: There could be disagreement regarding the quality of the goods or services to be repaid.There could be disagreement regarding which specific commodity would be used for repayment.The risk exists that the commodity to be repaid could increase or decrease markedly in value over the duration of the contract, thus benefiting the creditor or the debtor respectively. Fourthly, the barter system does not provide for any method of storing generalised purchasing power.

ΡΟΔΙΑ - Δίκτυο Ανταλλαγών Ρεθύμνου - Αρχικη Division of labour The division of labour is the specialization of cooperating individuals who perform specific tasks and roles. Because of the large amount of labour saved by giving workers specialized tasks in Industrial Revolution-era factories, some classical economists as well as some mechanical engineers such as Charles Babbage were proponents of division of labour. Also, having workers perform single or limited tasks eliminated the long training period required to train craftsmen, who were replaced with lesser paid but more productive unskilled workers.[1] Historically, an increasingly complex division of labour is associated with the growth of total output and trade, the rise of capitalism, and of the complexity of industrialised processes. In contrast to division of labour, division of work refers to the division of a large task, contract, or project into smaller tasks—each with a separate schedule within the overall project schedule. Theorists[edit] Plato[edit] Xenophon[edit] Ibn Khaldun[edit]