Microwave cookies. Grocery Bags. How To Seal a Bag Of Chips Without a Clip. The Chip Bag Fold. Learn this chip bag fold and you will never need a clamp ever again! 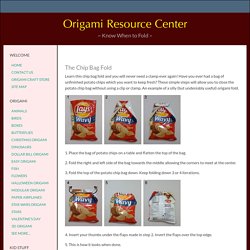 How to put out a grease fire. StillTasty: Your Ultimate Shelf Life Guide - Save Money, Eat Better, Help The Environment. Cheese Chart. Style of Beer. How to Make Tea the British Way - Anglophenia Ep 31. Easy Solutions to Common Kitchen Problems. Do you not know how to clean your cast-iron skillet? 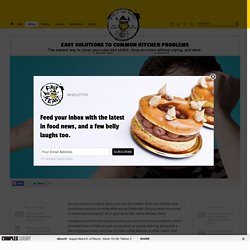 Does your kitchen sink smell like a mixture of moldy leftovers and bad milk? Did you never learn how to reheat pizza properly? Don’t give up on life—we’ve all been there. Instead, consult this list of easy solutions to common kitchen problems. Dining Etiquette. How to eat sushi. When serving grapes for kids. The Complete Guide to Making Cheesesteaks at Home. Sometimes, mimicking restaurant food at home means submitting to trial by sticky pizza dough, with a sentence of splattering refried beans. 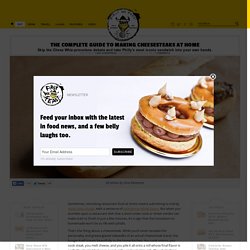 But when you stumble upon a restaurant dish that a short-order cook or street vendor can make start to finish in just a few minutes, it’s a sign that the translation to homemade won’t be so rife with pitfalls. That’s the thing about a cheesesteak. While you’ll never recreate the personality and grease-glazed sidewalks of an actual cheesesteak stand, the hoagie itself travels beautifully to the home kitchen. You cook onions, you cook steak, you melt cheese, and you pile it all onto a roll whose final flavor is perfectly situated between sweet, salty, and just plain rich. Gif Tutorial: How to Hardboil an Egg, With Egg Shop Chef Nick Korbee. Welcome back to the First We Feast GIF Tutorial series, where we ask restaurant cooks to demonstrate easy ways to step up your technique when cooking at home. 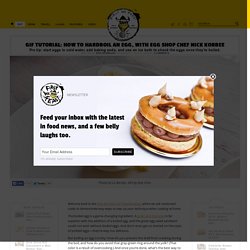 The boiled egg is a game-changing ingredient. A grain and rice bowl is far superior with the addition of a boiled egg, and the great egg salad sandwich could not exist without boiled eggs. And don’t even get us started on the topic of pickled eggs—they’re way too delicious. The Cutting-Edge Butter Knife of Your Dreams Is Finally Here. A grater integrated along the edge of the blade seems like a no-brainer, but it's apparently unique in the history of silverware. 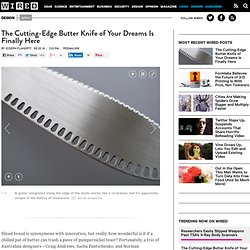 Design Momentum The trickiest part of manufacturing the stainless steel blade was stamping the blade in a way that ensured the strings of butter would fold back on the blade. The knife was designed to follow a traditional aesthetic so it would blend in with a wide variety of existing silver patterns. The designers created dozens of prototypes using laser cutters, drills, and machine tools, as well as the size and spacing of the holes before finding an optimal pattern and manufacturing process.

Pantschenko’s only concern was that the idea felt too obvious. The Best Way To Hold a Pizza Slice. Why does bending a pizza slice help you eat it? 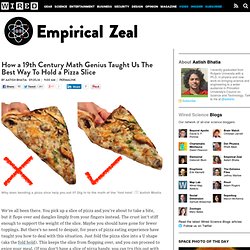 Dig in to the math of the ‘fold hold’. Aatish Bhatia We’ve all been there. You pick up a slice of pizza and you’re about to take a bite, but it flops over and dangles limply from your fingers instead. The crust isn’t stiff enough to support the weight of the slice. 14 Infographics to Help Organize Your Kitchen. With the right preparation and setup, your kitchen can be a magical place where you create the most amazing gustatory sensations. 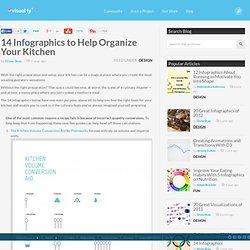 Without the right preparation? That space could become, at worst, the scene of a culinary disaster — and at best, a messy place where you just cooked a mediocre meal. HOW TO SEPARATE AN EGG WHITE FROM YOLK. How to get the most juice out of a lemon. How to Scramble Hard Boiled Eggs Inside Their Shell. 11 Earth-Shattering Food Inventions that Will Change Your Life. No knead, no stretch, completely foolproof pan pizza. Use fork to balance your taco while building it. How to behave at a sushi restaurant. By Oona McGee Food ( ) 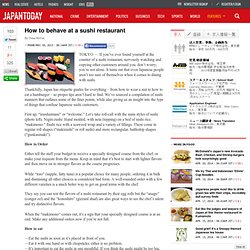 This is Admittedly the Most Gorgeous Way to Squeeze a Lemon. From the World of Uber-Expensive, Ultimately Useless, But Really Convenient Gadgets (Williams-Sonoma for short) comes the Press Art lemon and lime squeezer . Imagine this: You’re hosting your annual $4500 a plate dinner for Socially Challenged Purebred Poodles. The food is hot and pricey and fancy. You can tell because it’s the type of stuff that has at least three names and always tastes better with fresh squeezed lemon. Like, really fresh squeezed. Of course, you want your guests to feel involved, so you give everyone their own lemon slices and let them at it.

Enter Press Art and their admittedly gorgeous citrus squeezers. Boska Holland Toastabags Dutch. HOW TO MAKE ICED COFFEE. How To Make Bulletproof® Coffee. 31 Beautiful, Simple Ways to Drink Your Coffee Around the World [INFOGRAPHIC] While the standard espresso drinks in the States consist of a macchiato, cappuccino, red eye, latte, etc., when you peek around the corner at how the rest of the world takes their coffee, you'll be impressed at the variety. 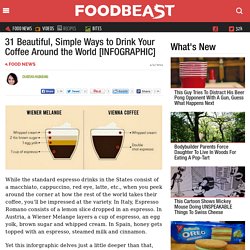 In Italy, Espresso Romano consists of a lemon slice dropped in an espresso. In Austria, a Wiener Melange layers a cup of espresso, an egg yolk, brown sugar and whipped cream. In Spain, honey gets topped with an espresso, steamed milk and cinnamon. Yet this inforgraphic delves just a little deeper than that, providing acute bits of coffee culture. For instance, Italian coffee bars aren't meant for socializing and laptop camping, as it's customary for patrons to drink coffee standing up.

Picthx Cheap Flights Charisma Madarang Charisma has an undying love for gritty literature and drinks coffee like water. Which Glass to Use for Which Drink and Why. Super Bowl Tips: How to Eat a Chicken Wing! How to eat a Toblerone. "What is in the sauce that is in the Big Mac?" Jim Koch Taught Me How to Drink All Night But Never Get Drunk. “That guy from the TV commercials!” 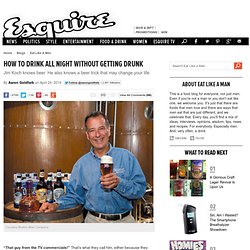 That’s what they call him, either because they don’t know his name, or are by now too drunk to remember it. As the co-founder and chairman of the Boston Beer Company, he has appeared in countless Sam Adams commercials over thirty years. And, while this always-smiling man is a regular guy like you and me while walking the street, the second he enters a bar Jim Koch becomes a celebrity. We met at a midtown Manhattan monstrosity called The Keg Room, where at least four people stopped Koch to say hello as we made our way to a table. One apologized for currently drinking something yellow and fizzy as opposed to a Boston Lager as we sat down. “So many beer lists are poorly arranged, but this is pretty nice,” Koch noted. Seconds later, he learned that one of the two Sam Adams offerings on tap was their new IPA, Rebel. He was right – I did see.

Corn on the Cob Ever.