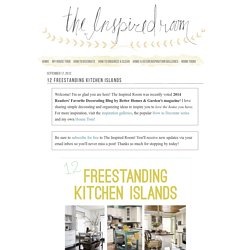 I'm so glad you are here! The Inspired Room was recently voted 2014 Readers' Favorite Decorating Blog by Better Homes & Garden's magazine! I love sharing simple decorating and organizing ideas to inspire you to love the home you have. For more inspiration, visit the inspiration galleries, the popular How to Decorate series and my own House Tour! Be sure to subscribe for free to The Inspired Room! Turning 3 Billy Bookcases into 1 Beautiful Kitchen Island » Curbly. Courtney and company used 3 IKEA Billy bookcases to create a beautiful and practical kitchen center island. 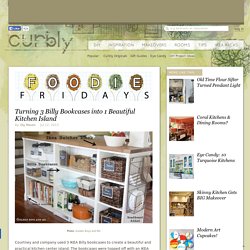 Decor is one of minimalist ideas in this how to build a kitchen island that you can apply to your kitchen, but if you have a mini kitchen space it will be a little difficult. 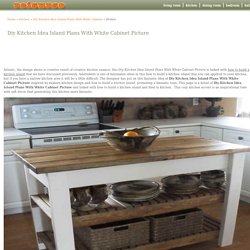 This modish kitchen concept is an attractive design with simple decor that bring out this kitchen more impressive. 30 Rustic DIY Kitchen Island Ideas. If you get bored with your kitchen and want to try something different. 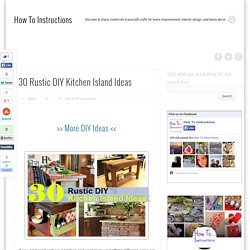 Here are 30 inexpensive ways to get you a rustic kitchen island. Home Frosting: Kitchen Island. I'm giving you a bit of a break from my outdoor projects and thought I'd show you what I was up to on the weekend. 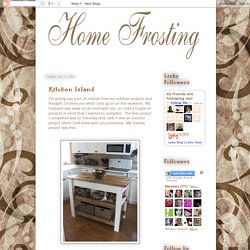 My husband was away on an overnight trip, so I had a couple of projects in mind that I wanted to complete. The first project I completed was on Saturday and, well, it was an outdoor project which I will share with you tomorrow. A-1 : Topics A to Z : About Us. Little Green Notebook: DIY Campaign Style Kitchen Island. I was really happy to use an antique dresser as a kitchen island in our apartment for the last year and a half. 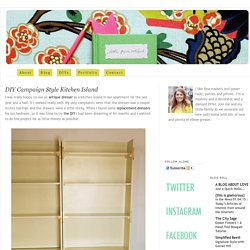 It's worked really well. My only complaints were that the dresser was a couple inches too high and the drawers were a little sticky. When I found some replacement dressers for our bedroom, so it was time to try the DIY I had been dreaming of for months and I wanted to do the project for as little money as possible. So to begin with I had a pair of campaign chests that were 31.5" tall and 30 wide. I used a power drill and a handful of drywall screws (which are really sharp) to screw the two dressers together from the inside.

I had my local hardware store (Metropolitan Lumber) cut me a big piece of smooth plywood to fit the back of the connected dressers and also six 4" tall legs from a 3" wide post, all for less than $20. Then I attached the plywood and counter-sunk the screws so I could fill the holes and have a more seamless finish. Haute To Sew: Kitchen Island. Did you see my kitchen remodel on Wednesday?? 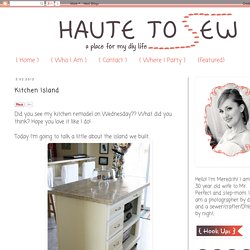 What did you think? Hope you love it like I do! Today I'm going to talk a little about the island we built. Lovely right?? To refresh you, it is made from a desk and hutch I bought on Craigslist for $20. Now, I didn't take very good pictures of the process because we were doing it mainly at night, in the garage and quite frankly, I was busy and tired. 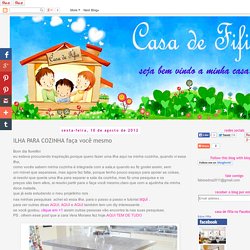 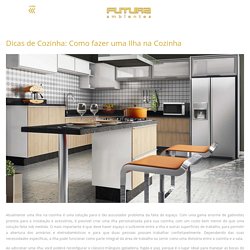 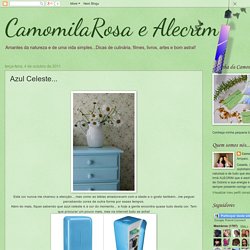 Além do mais, fiquei sabendo que azul celeste é a cor do momento... e hoje a gente encontra quase tudo desta cor. Tem que procurar um pouco mais, mas na internet tudo se acha! As famosas panelas francesas Le creuset, meu mais caro sonho de consumo... na cozinha claro! E por falar em Le creuset, veja que jogo lindinho tipo frutas... Kitchen Island made from Desk - My Repurposed Life™ Let’s revisit yesterday’s post about building a kitchen island from a desk. I took the desk from jamie’s room. I added a little of this and that. Used some fabulous Gorilla Wood Glue to glue some luan on top of the ugly OSB. Put it all on some casters. My Suite Bliss: DIY: Kitchen Island Re-do. Since we bought our house my husband and I have dreamed about remodeling the kitchen . . it has been 3 years and we finally got started! We decided to first do the island. But before we go into the project that we worked so hard on last week let me show you some inspirations on what I want to turn my kitchen into: (check out my pinterest for more . .)

Lets turn back the clock and see the kitchen that I despised so much . . Ana White. DIY Kitchen Island — Decohubs.