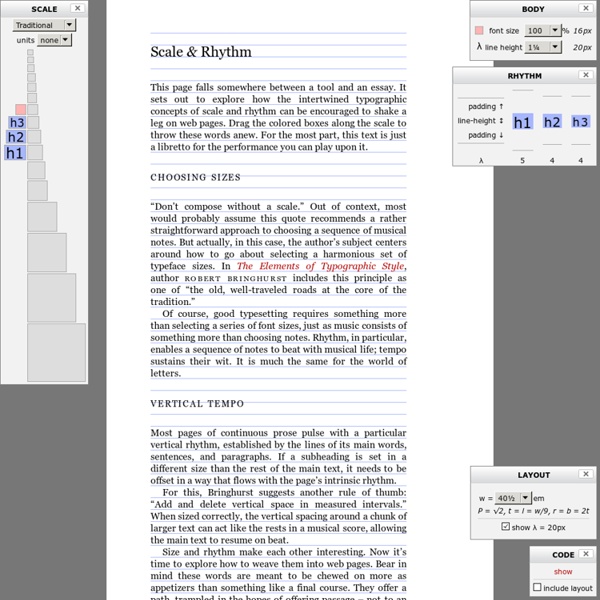 This page falls somewhere between a tool and an essay. It sets out to explore how the intertwined typographic concepts of scale and rhythm can be encouraged to shake a leg on web pages. Drag the colored boxes along the scale to throw these words anew. For the most part, this text is just a libretto for the performance you can play upon it. Choosing sizes Don’t compose without a scale. Of course, good typesetting requires something more than selecting a series of font sizes, just as music consists of something more than choosing notes. Vertical Tempo Most pages of continuous prose pulse with a particular vertical rhythm, established by the lines of its main words, sentences, and paragraphs. For this, Bringhurst suggests another rule of thumb: Add and delete vertical space in measured intervals. Size and rhythm make each other interesting. Sizing up the <body> The first step: establish the size of the main text. Here, it pays to work with the grain. Declare <body> font-size using % The em

CSS Typography: The Basics Typography is an essential component of a website’s design. This is for good reason: good typography is not only imperative for aesthetic appeal, but also improves site usability when text legibility and readability concepts are applied. Typography is all about proportions and spacing. Creating Exciting And Unusual Visual Hierarchies Advertisement Layout, for both print and screen, is one of the most important aspects of graphic design. Designs that extend across multiple pages or screens, whether containing large or small amounts of type, must be carefully controlled in a way that is enticing and is easy for all to access. Careful control of visual hierarchy is a key aspect of the design decisions we have to consider. In this article, we will look at how frequently type needs to be broken down into different levels, such as topic, importance and tone of voice.

CSS Typography: Techniques and Best Practices In the first part of this series, we discussed some fundamental concepts pertaining to CSS typography. Now we are going to cover some excellent techniques, tips, tricks and best practices for dealing with typography on websites. This is the second part of a three-part series of guides on CSS typography that will cover everything from basic syntax to best practices and tools related to CSS typography. Better Web Typography with @font-face For normal text blocks, using smart font stacks (as discussed in the first part) is a good idea, but for headings and short text blocks, more interesting fonts can be used with the help of @font-face.

WhatFont Tool - The easiest way to inspect fonts in webpages « Chengyin Liu ← Back to Chengyin's main page What is the easiest way to find out the fonts used in a webpage? Firebug or Webkit Inspector? No, that's too complicated. It should be just a click away. Hence I wrote WhatFont, with which you can easily get font information about the text you are hovering on.

CSS Typography: Examples and Tools In the previous part of this series, we discussed some techniques and best practices for CSS typography. Let’s now delve into the subject further by looking into some case studies, tools, as well as a showcase of excellent CSS typography on the web. This is the third part of a three-part series of guides on CSS typography that will cover everything from basic syntax to best practices and tools related to CSS typography. Case Studies on CSS Typography Tutorials and theories can be great, but nothing says proof like a case study. Here are a handful of studies that can provide you with some real-world insights regarding typography on the web.

Checklist for Better Web Typography Typography influences whether or not viewers read the content, as well as having a subtle effect on how they perceive your site. Choosing appropriate typefaces and controlling their presentation is critical to conveying your message. The following checklist serves to summarize the major points and to help you ensure you’ve done all you should before finalizing any web site you are creating. Use this navigation and jump directly to content : {Layout} {Typefaces and Formatting} {Content} {Graphic Text} Layout—Did you:

Layout Galaj All layouts use valid markup and CSS, and have been tested successfully on Internet Explorer/win 5.0, 5.5, 6 and beta 2 preview of version 7; Opera 8.5, Firefox 1.5 and Safari 2. Each of the columns could be the longest, and for testing columns length I've used the script filler text on demand. Each layout could represent a site with five main sections: header, content, navigation, other stuff and footer. The basic markup, common to every layout, is the following: <div id="container"> <div id="header">Header</div> <div id="wrapper"> <div id="content">Content</div> </div> <div id="navigation">Navigation</div> <div id="extra">Extra stuff</div> <div id="footer">Footer</div> </div> It's almost minimal, apart from an extra wrapper around the content.

Beautiful web type — the best typefaces from the Google web fonts directory Lucius Annaeus Seneca60 AD Among the numerous faults of those who pass their lives recklessly and without due reflexion, my good friend Liberalis, I should say that there is hardly any one so hurtful to society as this, that we neither know how to bestow or how to receive a benefit. It follows from this that benefits are badly invested, and become bad debts: in these cases it is too late to complain of their not being returned, for they were thrown away when we bestowed them. Nor need we wonder that while the greatest vices are common, none is more common than ingratitude: for this I see is brought about by various causes. The first of these is, that we do not choose worthy persons upon whom to bestow our bounty, but although when we are about to lend money we first make a careful enquiry into the means and habits of life of our debtor, and avoid sowing seed in a worn-out or unfruitful soil, yet without any discrimination we scatter our benefits at random rather than bestow them.

Using SVG in CSS with JavaScript detection Warning This article was written over six months ago, and may contain outdated information. With the release of IE9 and Firefox 4 all major browsers are going to support using SVG in the img element or as a CSS background image, which is great news as SVG images are good for high definition, scalable websites. I’ve written a couple of posts recently about using SVG with the background-image property, and how to cope with browsers that don’t support it. The method I came up with works, but is far from elegant; for one thing, it doesn’t allow for transparency. The Science Behind Fonts (And How They Make You Feel) I’ve noticed how seemingly small things like font and the spacing between letters can impact how I feel when reading online. The right font choice along with the absence of sidebars and popups makes everything feel easier and better to read. Websites like Medium, Signal vs. Noise, and Zen Habits are like yoga studios for content.

v0.3.8 documentation - lessphp Documentation v0.4.0 lessphp is a compiler that generates CSS from a superset language which adds a collection of convenient features often seen in other languages. All CSS is compatible with LESS, so you can start using new features with your existing CSS.