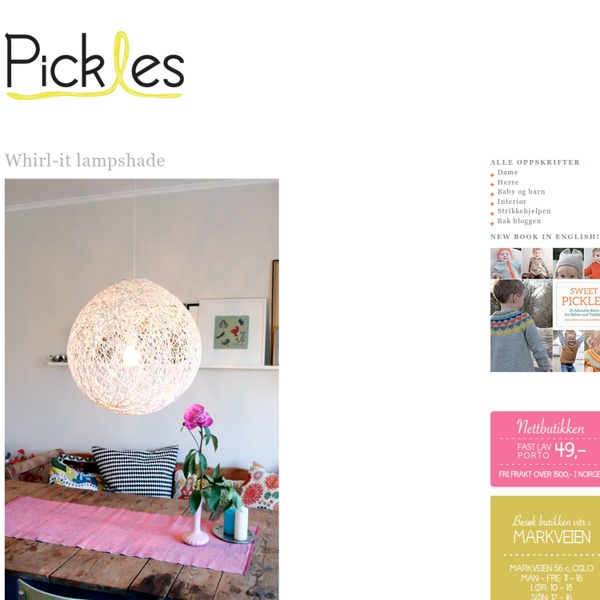 We really needed a new lamp, and we´ve planned to make one for months. This week we finally got around to it. It takes a bit of different materials, but it´s really easy when you´ve started. We recommend making it outdoors, as it gets quite messy. The result is pretty neat, especially at night when the threads cast shadow on the walls. We planned to make the lamp using the yarn Garnstudio Ice, but it ran out really quickly, and we had to improvise by using a thinner yarn to complete it. What we used One big, round balloon. How we did itGather all the materials.Put the yarn into the glue and mix properly. Fill the balloon to a desireable size. Hang it and start whirling. Whirl pretty tightly.

Tissue Rosette Kissing Balls | The Idea Room *Update–Many of you have had questions about how to “twist” the paper. I have made a quick video showing you how. You can find the video for how to make tissue flowers here: How to Make Tissue Flowers Video Thanks everyone for all your sweet comments about my last Valentine’s day project…the “Be Mine” Framed Art. I had some requests for a tutorial on how I made the tissue paper rosette decor balls {kissing balls}. Many of you will remember that I have made these before and have them hanging in my daughter’s room. First off you will need a couple of rolls of tissue paper streamers. Start by cutting the paper into strips about 24 inches long. Now take your strip and start on one end and begin rolling it up between your fingers. After you have a few rolls, continue to roll it up but now twist the paper. Now just continue to roll and twist until you have reached the end of the strip. After you have a few rosettes made, start gluing {I used a glue gun} them onto a round styrofoam ball. P.S.

photo lampshades PINTEREST UPDATE: This is a post from 2010. I do not take custom orders, only the tutorial is available. The lamps have held up wonderfully. As many of you requested, Marie is sharing a little tutorial here on how she made her lampshades. Marie is happy to do custom orders for those that prefer buying over making! * LAMPSHADE – Hobby Lobby carries self-adhesive shades & nightlights, Target has some smaller lamps for $19 that would be perfect for this project, I’ve found some lamps & shades on Craigslist. * GLUE – I used a hot glue gun for the first lamp. * VELLUM – I buy this in packs of 20 (I think) in the scrapbooking section of Hobby Lobby. * CRAFT KNIFE OR SCISSORS, PENCIL & RULER – to trim the vellum, I used a ruler and pencil to mark the cut lines & then used a craft knife and self-healing mat to cut the vellum. * PHOTOS – I used a free program called Picasa to make the photo collage (I believe this program is made by Google, check their page of programs if you are interested).

Lovely Spaces - Craft room | How Joyful Hello my lovely readers! This past weekend was so crazy! We lost our power Thursday night – I’m so glad I schedule my draft post – The bad part I spend days without power in our house, when you work in your computer that’s kind of a vital ingredient hehe. So now that you are all updated in my weekend, I want to share some of my favorite Craft room/Office images, all of them collected via Pinterest! [source] [source] Don’t you just love the closet desk idea? [source] [source] [source] I also love the contrast and pops of color And I could not stop myself from sharing my latest obsession and next Project, an awesome Studio table =] here my inspiration [source] [source] [source] [source] And last but not least, wall calendar and notes ideas [source] [source] I so want to try the magnet calendar idea =] Here you can also see more of my pins for craft and Office Inspiration. But my friends always remember to pin from inside a post and not on a search, why? Do you love Pinterest too?

Fine Art Presentations: The e.Gallery Kasimir Malevich (1878–1935). Russian painter and designer, with Mondrian the most important pioneer of geometric abstract art. Born near Kiev; trained at Kiev School of Art and Moscow Academy of Fine Arts; 1913 began creating abstract geometric patterns in style he called suprematism; taught painting in Moscow and Leningrad 1919–21; published book, The Nonobjective World (1926), on his theory; first to exhibit abstract geometric paintings; strove to produce pure, cerebral compositions; famous painting White on White (1918) carries suprematist theories to absolute conclusion; Soviet politics turned against modern art, and he died in poverty and oblivion. He began working in an unexceptional Post-Impressionist manner, but by 1912 he was painting peasant subjects in a massive ‘tubular’ style similar to that of Léger as well as pictures combining the fragmentation of form of Cubism with the multiplication of the image of Futurism (The Knife Grinder, Yale Univiversity Art Gallery, 1912).

How to make gift bags from newspaper When I bought something at a store recently, the clerk handed me my purchase in a bag made from a newspaper. I liked it very much and had to make some more—thus today's DIY recycled newspaper project: gift bags made from the Wall Street Journal. You can vary the dimensions, of course, but here's what I used to create a bag that's 5" tall, 4.5" wide, and 3" deep. Stack two sheets of newspaper on top of each other. Cut out a rectangle that's 15.5" wide and 8.25" tall. Fold a flap 1.25" down from the top. Cut two pieces of cardstock or chipboard to 4.25" x 1", then glue them on the widest two panels just under the top fold. Put glue on the outside of the 0.5" tab and bring the left-most panel over to form the body of the bag, aligning the cut edge of the panel with the folded edge of the flap. Upend the bag so the 2" flap is now up. Put glue on both flaps and fold them inward to form the bottom of the bag.

Build a Laundry Basket Dresser | Free and Easy DIY Project and... The free content provicded by this website is made possible by the following current sponsors. Thank you! The Visual Art and Design of Famous Writers, Part 2 When last we visited, we were examining the visual art of famous authors. But as I continued to dig into this subject, I realized that I had shown just the tip of the iceberg. Here, then, are an additional 22 writers who also spent time creating art. Hermann Hesse self-portrait, 1917 Above and below: Hesse illustrations for "The Metamorphosis of Piktor" The German novelist and poet Hermann Hesse (1877–1962) was also quite an accomplished artist. Above and below: untitled paintings by D. Equally as proficient was D. Charlotte Brontë, "Ashburnham Church," 1845 A Brontë drawing from 1829 As children, the novelist and poet Charlotte Brontë (1816–1855) and her sister Emily kept each other and their two sisters amused with drawings of classic ruins, biblical scenes, and landscapes. Above and below: "Scissor Fantasies" by Hans Christian Andersen It is of little surprise that the children’s author Hans Christian Andersen (1805–1875) created art. A view of Cincinnati by Washington Irving, 1832 G.

Coffee Stirrer Wall Art Last week, I posted a preview of the simple, inexpensive wall art my mom and I created. Now I’m excited to show you how you can make a one-of-a-kind coffee stirrer masterpieces too! I’m big on projects that anyone can do. And this is one of those projects. Here’s all you need to get started: 1. Additional Supplies: 5. Okay, first things first. So, once you’ve got your palette, it’s time to paint your frames and your coffee stirrers! My mom and I did our painting as the sun was setting, which is always a questionable decision. I was going for the reclaimed driftwood sort of look. Once your coffee stirrers are painted, it’s time to trim them to fit into the frame(s) you’ve chosen. I found the quickest way to do this is to measure one stick to be the length you need it and then use it as the guide for trimming all the others. This next part is fun because you’ll start to see your piece come together fairly quickly. What’s left?