100 best Typefaces of all times 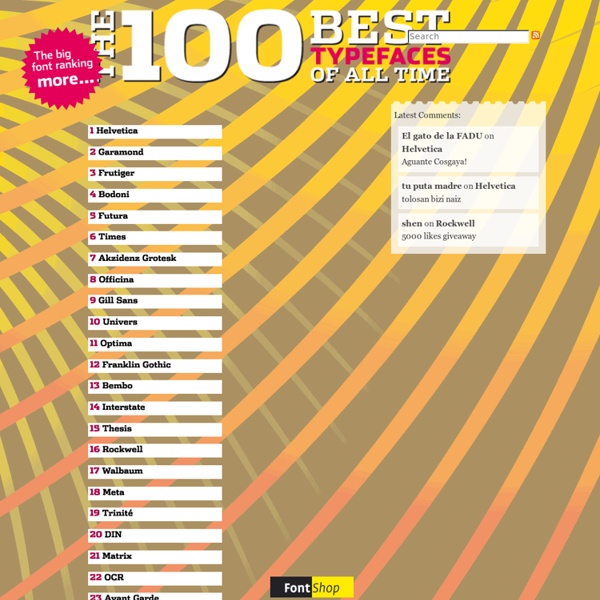 100 Greatest Free Fonts Collection for 2012 Today we'd like to delight you with an extensive list of The Best Free Fonts for 2012. We've made a collection in which you can find Sans Serif, Slab Serif, Rounded, Modern, Display , Art Deco, Geometric, Urban, Futuristic and even abstract style types. An important part of typography is selecting the right typeface for a project. This is one these things that you might want to keep handy for your next designs. Enjoy!

An Oscar-winning visual effects supervisor picks the 5 movies that floored him visually Most people get into visual effects for the explosions. But not Robert Legato, the visual effects supervisor of Avatar and The Aviator, who also won Oscars for his work on Titanic and Hugo. “Everything I end up liking is outrageously simple,” Robert tells the TED Blog. 20 fonts every graphic designer should own Renowned Italian designer Massimo Vignelli, creator of the classic American Airlines logo design, once said that designers use far too many typefaces. But with so many great free fonts around, it's no surprise creatives collections are ever-growing. Vignelli's all-purpose toolkit features household names like Garamond, Bodoni, Helvetica, Univers, Futura, Caslon and Baskerville – between them spanning some three centuries of type design history.

Oscar-awarded Movie Fonts 2013 – Linotype Font Feature Life of Pi After the ship he is on is wrecked, young Pi finds himself sharing the only lifeboat with a tiger. The pair spends several months together on the ocean until they are finally saved. Awarded four Oscars, including the Best Director Award, Life of Pi was thus the big winner at this year’s Oscars ceremony. Hardest language to learn What is the hardest language to learn? Extremely Hard: The hardest language to learn is: Polish – Seven cases, Seven genders and very difficult pronunciation. The average English speaker is fluent in their language at the age of 12, in contrast, the average Polish speaker is fluent in their language after age of 16.Very Hard: Finnish, Hungarian, and Estonian – The Ugric languages are hard because of the countless noun cases.

25 Classic Fonts That Will Last a Whole Design Career Eric Gill, Adrian Frutiger and Max Miedinger are names we associate with the classic typefaces designers use on a daily basis. Their font creations are timeless designs that look right at home no matter what century we’re in. This collection of 25 classic fonts is a round up of the best and most popular fonts every designer should own. You can be sure that they will last your whole design career. Who hasn’t heard of Helvetica? It’s probably the most recognised classic typeface.

Beautiful web type — the best typefaces from the Google web fonts directory Among the numerous faults of those who pass their lives recklessly and without due reflexion, my good friend Liberalis, I should say that there is hardly any one so hurtful to society as this, that we neither know how to bestow or how to receive a benefit. It follows from this that benefits are badly invested, and become bad debts: in these cases it is too late to complain of their not being returned, for they were thrown away when we bestowed them. Nor need we wonder that while the greatest vices are common, none is more common than ingratitude: for this I see is brought about by various causes. The first of these is, that we do not choose worthy persons upon whom to bestow our bounty, but although when we are about to lend money we first make a careful enquiry into the means and habits of life of our debtor, and avoid sowing seed in a worn-out or unfruitful soil, yet without any discrimination we scatter our benefits at random rather than bestow them.

Scandinavia Standard Take a tour of this minimalist, monochrome living space, including the terrace we’re all lusting after. read more > The shop in Nørrebro that’s making us cacti-crazy and succulent-savvy. read more > For those who want high-quality Scandinavian home design at a reasonable price, let Broste Copenhagen show you the Nordic way of life. The Top 3 Favorite Typefaces of Influential Designers → Typewolf April 29, 2014 Ever wonder what fonts your favorite designers have been using lately? I reached out to 41 of the most talented and influential designers in our industry and asked them to list their top 3 current favorite typefaces. I specifically asked for current favorites rather than all-time favorites – I thought that would make the results more interesting and would perhaps highlight some newer, less-established typefaces more so than timeless classics. At the end of the post I compile all of the designer’s responses into a list of the top 11 most popular typefaces. What surprised me the most was the sheer diversity of the selections – 88 different typefaces were mentioned altogether while only 19 of those were selected as a favorite by more than one designer.

A Beginner’s Guide to Pairing Fonts Pairing fonts can be a challenge. Selecting two or more fonts which work well is one thing - selecting two which work together to achieve your typographic aims may have you reaching for the aspirin. Let's see if we can alleviate any headaches.