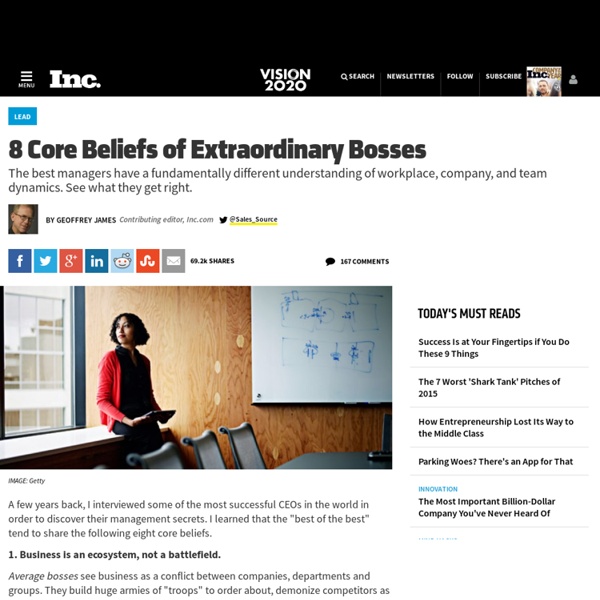 A few years back, I interviewed some of the most successful CEOs in the world in order to discover their management secrets. I learned that the "best of the best" tend to share the following eight core beliefs. 1. Business is an ecosystem, not a battlefield. Average bosses see business as a conflict between companies, departments and groups. They build huge armies of "troops" to order about, demonize competitors as "enemies," and treat customers as "territory" to be conquered. Extraordinary bosses see business as a symbiosis where the most diverse firm is most likely to survive and thrive. 2. Average bosses consider their company to be a machine with employees as cogs. Extraordinary bosses see their company as a collection of individual hopes and dreams, all connected to a higher purpose. 3. Average bosses want employees to do exactly what they're told. 4. Average bosses see employees as inferior, immature beings who simply can't be trusted if not overseen by a patriarchal management. 5.

6 Things Rich People Need to Stop Saying All of a sudden, it's like you can't make huge amounts of money without people getting all pissed off about it. And it's only going to get worse -- with the election coming up and the weather getting warmer, this whole "Occupy" movement is probably going to come back strong. The 1 percent will feel even more besieged than before. "What the hell?" Recruiting: 8 Qualities Your Best Employees Should Have Great employees are reliable, dependable, proactive, diligent, great leaders and great followers... they possess a wide range of easily-defined—but hard to find—qualities. A few hit the next level. Some employees are remarkable, possessing qualities that may not appear on performance appraisals but nonetheless make a major impact on performance. Here are eight qualities of remarkable employees: 1.

Companies overcoming challenges with creativity and camaraderie The World Economic Forum recently outlined the trends to watch out for in the coming year, and the list could be viewed as very worrying indeed for any business that doesn’t relish a challenge. A lack of global leadership, deepening income inequality, persistent jobless growth and the rise of geostrategic competition were all highlighted at the top of the report. However, the sign of a great businessperson is to rise above problems and buck trends. Virgin has built its reputation as a challenger brand over five decades, taking on giants in sectors as diverse as travel, telecoms, music and finance. We’ve seen all sorts of market conditions, economic, political and crises and continued to adapt and develop along the way. The ability to welcome competition and take on challenges has certainly evident in the new Fast Track 100 companies.

Bayer Foundations - Bayer Scholarships Biology and molecular biology Biotechnology, bioengineering and bioinformatics Chemistry and biochemistry Pharmaceutics and drug discovery Bayer supports study projects, internships, summer courses, preparatory and supplementary study courses, as well as theses and doctoral studies (the program does not include post-doctoral scholarships). The foundation places great emphasis on internationalism, and therefore scholarships are granted exclusively to students from German-speaking countries wishing to study abroad and foreign applicants who want to study in Germany. Applicants should be able to show good to very good final school marks as well as a particularly good intermediate diploma or an above-average bachelor’s exam. Furthermore, a broad horizon and a high level of motivation and personal commitment are expected of all applicants – be it in a social, political or cultural field. The current application timeline of for scholarships for students and trainees is over.

How leaders kill meaning at work - McKinsey Quarterly - Governance - Leadership As a senior executive, you may think you know what Job Number 1 is: developing a killer strategy. In fact, this is only Job 1a. You have a second, equally important task. It's the 21st century – why are we working so much? If there's one thing practically all futurologists once agreed on, it's that in the 21st century there would be a lot less work. What would they have thought, if they had known that in 2012, the 9-5 working day had in the UK become something more like 7am to 7pm? They would surely have looked around and seen technology take over in many professions which previously needed heavy manpower, they would have looked at the increase in automation and mass production, and wondered – why are they spending 12 hours a day on menial tasks? It's a question which isn't adequately answered either by the right or by the official left. Conservatives have always loved to pontificate about the moral virtue of hard work and much of the left, focusing on the terrible effects of mass unemployment, understandably gives "more jobs" as its main solution to the crisis.

How Hiring Single Moms to Provide Customer Support put Mindvalley in the Top 2% of all Support Teams - Mindvalley Blog It’s not just our customers who inspire us. The people we hire for our team often have amazing life stories and experiences of their own, and we love discovering these because of how it has shaped them as individuals, led them to our door and put them side by side with our mission to help people lead happier lives and be extraordinary. A few years back we decided to expand our Customer Support team and open a support center in Costa Rica. Costa Rica is a hotbed for customer support centers with even major companies like Amazon.com having teams there.

How You Make Judgments: The Elephant and its Rider Part of the sequence: Rationality and Philosophy Whether you're doing science or philosophy, flirting or playing music, the first and most important tool you are using is your mind. To use your tool well, it will help to know how it works. Today we explore how your mind makes judgments. From Plato to Freud, many have remarked that humans seem to have more than one mind.1 Today, detailed 'dual-process' models are being tested by psychologists and neuroscientists: Since the 1970s dual-process theories have been developed [to explain] various aspects of human psychology...

The executive's guide to better listening - McKinsey Quarterly - Organization - Talent A senior executive of a large consumer goods company had spotted a bold partnership opportunity in an important developing market and wanted to pull the trigger quickly to stay ahead of competitors. In meetings on the topic with the leadership team, the CEO noted that this trusted colleague was animated, adamant, and very persuasive about the move’s game-changing potential for the company. The facts behind the deal were solid. The CEO also observed something troubling, however: his colleague wasn’t listening.

Half Sigma: Why a career in computer programming sucks Temporary nature of knowledge capital Let’s being by reviewing what I previously wrote about the four types of human capital. Computer programming is a job that’s heavily dependent on temporary knowledge capital. It’s temporary because the powers that be keep changing the languages and tools that programmers need to do their jobs. Stop Comparing Management to Sports Often, when I’m asked to give a speech on strategy at some company event or conference, I find that one of the other speakers is a former professional sports player. In that capacity, I’ve happily attended the talks – with much interest – of a famous ice-hockey and a famous table tennis player, some rowers, and a freeskier; I’ve listened to the fascinating tales of a professional BASE jumper whose parachute failed, someone who walked to the North Pole unaided, an Olympic athlete, and a championship-winning golfer. Invariably, they offer tantalizing stories of commitment, perseverance, and the sweet joy of winning. (Some talks go even further, comparing business to war – I’ve accordingly witnessed rousing speeches on Lanchester strategy and from retired generals on how to overcome the enemy.)