The internal democracy dilemma: Balancing MP and member preferences in leadership selection. The resignations and leadership challenges in the wake of the Brexit vote have reignited debates around intra-party democracy. 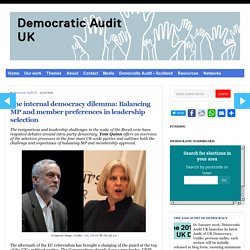 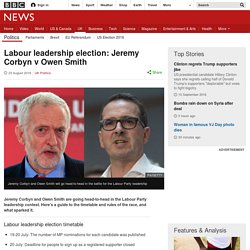 Here's a guide to the timetable and rules of the race, and what sparked it. Labour leadership election timetable 19-20 July: The number of MP nominations for each candidate was published20 July: Deadline for people to sign up as a registered supporter closed22 August: Ballot papers start to be sent out in the post and by email21 September: Deadline for ballot papers to be returned is midday24 September: The result will be announced at a special conference in Liverpool Who can vote in Labour leadership contest?

Labour Party members, affiliated trade union supporters and so-called registered supporters are able to vote, although there are some key differences from the 2015 contest which Jeremy Corbyn won. Labour Party members need to have signed up on or before 12 January to be eligible to vote. The internal democracy dilemma: Balancing MP and member preferences in leadership selection. The resignations and leadership challenges in the wake of the Brexit vote have reignited debates around intra-party democracy. 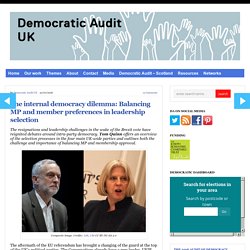 Tom Quinn offers an overview of the selection processes in the four main UK-wide parties and outlines both the challenge and importance of balancing MP and membership approval. Composite Image. Credits: LSE, CBI CC BY-NC-SA 2.0. How leadership rule changes have led to a fight for the very soul of the Labour party. And so Labour’s sad soap opera continues. 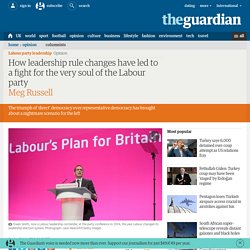 Jeremy Corbyn has resisted all calls to go, despite 172 of his 229 parliamentary colleagues voting no confidence in his leadership (while only 40 supported him). He now has a place on the ballot paper in a potential leadership election, following a knife-edge national executive committee vote on interpreting the party’s rules. Hence we face the prospect of a contest over the summer where the incumbent leader seeks re-election knowing that more than 80% of his MPs want him to go. Such a situation is unprecedented, not only in Britain but possibly anywhere in the world. All change: a brief history of British political leadership contests. The Conservatives, Ukip and the Green party are all seeking a new leader. 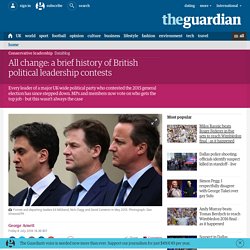 Whether Jeremy Corbyn resigns or not, it seems likely Labour will be having its own election soon too. In a sign of the barmy political times, there is not a single leader of a major UK party who fought the 2015 election that has not subsequently stepped down. Given this explosion of internal democracy, it is worth pointing out that the formal leadership election is a relatively new invention. It was only in 1965 that the Conservative party (founded in 1834) gave the decision to MPs; previous leaders were picked through consultation. The considerably younger Labour party, founded in 1900, was much quicker to adopt the system, with Ramsay MacDonald becoming the first leader elected by MPs in 1922. Elections usually come after a leader’s resignation (whether their hand is forced or not) but sometimes challengers take on incumbents and win. 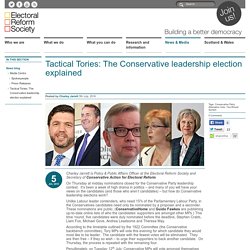 On Thursday at midday nominations closed for the Conservative Party leadership contest. It’s been a week of high drama in politics – and many of you will have your views on the candidates (and those who aren’t candidates) – but how do Conservative leadership elections work? Unlike Labour leader contenders, who need 15% of the Parliamentary Labour Party, in the Conservatives candidates need only be nominated by a proposer and a seconder. These nominations are public. (ConservativeHome and Guido Fawkes are publishing up-to-date online lists of who the candidates’ supporters are amongst other MPs.) Who is standing in the Conservative leadership election, how does the party choose a new Tory leader and can I vote? Corbyn as an organisational phenomenon. Labour’s “three-quid voters”: the challenges and opportunities of opening up the Party. Tens of thousands registered as Labour supporters in the run up to the leadership contest, making the party’s election rules the main controversy of the event – despite being in place since 2014. 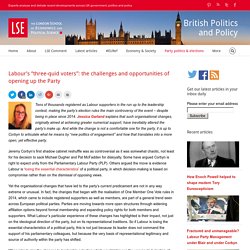 Jessica Garland explains that such organisational changes, originally aimed at achieving greater numerical support, have inevitably altered the party’s make up. And while the change is not a comfortable one for the party, it is up to Corbyn to articulate what he means by “new politics of engagement” and how that translates into a more open, yet effective party. Jeremy Corbyn’s first shadow cabinet reshuffle was as controversial as it was somewhat chaotic, not least for his decision to sack Michael Dugher and Pat McFadden for disloyalty.

Going, Going, Gone: How Safe is David Cameron? Last weekend, rumors were once again abound of plots to remove David Cameron as leader. 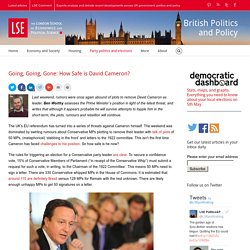 Ben Worthy assesses the Prime Minister’s position in light of the latest threat, and writes that although it appears probable he will survive attempts to topple him in the short-term, the plots, rumours and rebellion will continue. The UK’s EU referendum has turned into a series of threats against Cameron himself. The weekend was dominated by swirling rumours about Conservative MPs plotting to remove their leader with talk of plots of 50 MPs, (metaphorical) ‘stabbing in the front’ and letters to the 1922 committee. This isn’t the first time Cameron has faced challenges to his position. So how safe is he now? The rules for triggering an election for a Conservative party leader are clear.

How these numbers may translate into a leadership election is less clear. So what hope can Cameron draw from the past for his future? How Prime Ministers Departed 1974-2010 So is he safe? Labour leadership election - How the Alternative vote works. As we close in on the date (September 12th) when the new Labour leader will be announced, those of you who may not have learned election systems yet might be wondering why, if more people vote for Jeremy Corbyn than any other candidate, he still may not win. 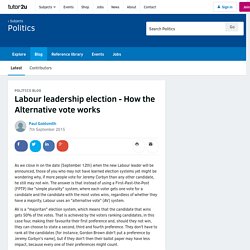 The answer is that instead of using a First-Past-the-Post (FPTP) like "simple plurality" system, where each voter gets one vote for a candidate and the candidate with the most votes wins, regardless of whether they have a majority, Labour uses an "alternative vote" (AV) system. AV is a "majoritan" election system, which means that the candidate that wins gets 50% of the votes. That is achieved by the voters ranking candidates, in this case four, making their favourite their first preference and, should they not win, they can choose to state a second, third and fourth preference.

According to sources, Yvette Cooper's team are counting on Jeremy Corbyn getting fewer than 43% of the first preference votes. SN03938.