Cialdini's Six Principles of Influence - Communication Skills Training from MindTools. Convincing Others to Say "Yes" (Also known as the Six Weapons of Influence) How do you influence others? 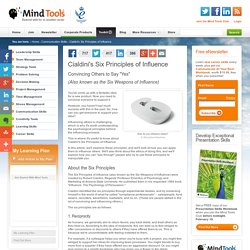 © iStockphoto/blackred You've come up with a fantastic idea for a new product. Now you need to convince everyone to support it. However, you haven't had much success with this in the past. Influencing others is challenging, which is why it's worth understanding the psychological principles behind the influencing process. This is where it's useful to know about Cialdini's Six Principles of Influence. In this article, we'll examine these principles, and we'll look at how you can apply them to influence others. About the Six Principles The Six Principles of Influence (also known as the Six Weapons of Influence) were created by Robert Cialdini, Regents' Professor Emeritus of Psychology and Marketing at Arizona State University. The six principles are as follows: 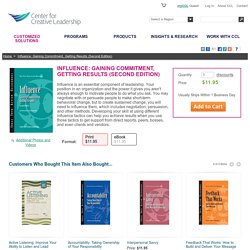 A Free Membership That Supports Your Leadership Needs - Join and Save Did you know that you can join the open and always-free myCCL at no cost and get a discount on this CCL Press Publication? CCL provides myCCL members with a 5% discount on CCL Press Publications like this just for being a member. Membership is complimentary in order to support our non-profit goal of connecting a world community of leaders and providing the best in leadership and leadership development for the benefit of societies world-wide. Join the always-free myCCL online community and get access to this discount along with a host of resources to support you or your organization with its leadership needs. Dive Deeper and Get More Benefits Through myCCL PREMIUM. Leadership Influence. How to Be Charismatic: 7 Powerful Tips from the Mentalist. Image by CielChen (license). 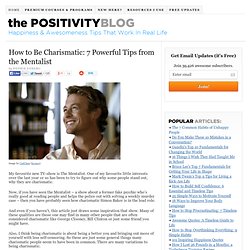 My favourite new TV-show is The Mentalist. One of my favourite little interests over the last year or so has been to try to figure out why some people stand out, why they are charismatic. Now, if you have seen the Mentalist – a show about a former fake psychic who’s really good at reading people and helps the police out with solving a weekly murder case – then you have probably seen how charismatic Simon Baker is in the lead role.

And even if you haven’t, this article just draws some inspiration that show. Many of these qualities are those one may find in many other people that are often considered charismatic like George Clooney, Bill Clinton or just some friend you might have. Also, I think being charismatic is about being a better you and bringing out more of yourself with less self-censoring. Find your own variation by exploring yourself. 1. Yes, this sounds really obvious. Charismatic people often seem to smile a whole lot. 2. 3. Focus on your breathing. How To Be Cool: 5 Research-Backed Tips. Who Hasn’t Wanted To Be Cool? 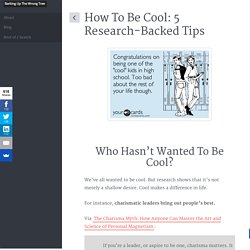 We’ve all wanted to be cool. But research shows that it’s not merely a shallow desire. Cool makes a difference in life. For instance, charismatic leaders bring out people’s best. Via The Charisma Myth: How Anyone Can Master the Art and Science of Personal Magnetism: 29 Clever Tactics to Become an Influencer. As marketers, we are used to trying to influence people to make a purchase, but what about when you want to influence someone to do you a favor or agree with your opinion? 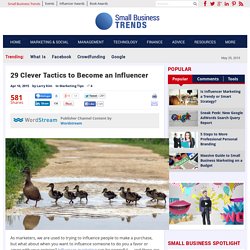 Influencer marketing can be powerful — and there are many subtle tactics you can use to sway non-believers to your point of view and become an influencer. How strong are your influencing skills? Next time you are struggling to get your opinion heard, use one of these tips to sway others to your way of thinking. It may not be magic, but it’s pretty close. 1. People are much more inclined to push for their own idea rather than someone else’s. Coworker: We really need to increase online orders this quarter.You: I’ve read that more people these days are placing orders on mobile devices.

The downside here is that you don’t get credit for the idea, but if you’re responsible for the bottom line (in this case, increasing online orders) or have a bigger end goal in mind, using tactics like these helps get others on board. 2. Influential Leaders Ask These 6 Questions. The key to being a powerful leader isn't giving orders -- it's extending your influence. 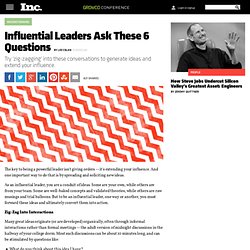 And one important way to do that is by spreading and soliciting new ideas. As an influential leader, you are a conduit of ideas. Some are your own, while others are from your team. Some are well-baked concepts and validated theories, while others are raw musings and trial balloons. But to be an influential leader, one way or another, you must forward these ideas and ultimately convert them into action. Zig-Zag Into Interactions Many great ideas originate (or are developed) organically, often through informal interactions rather than formal meetings -- the adult version of midnight discussions in the hallway of your college dorm.

What do you think about this idea I have? Rather than schedule these interactions, which can feel too formal and potentially stifling, you should budget five or ten extra minutes to zig-zag your way to meetings, lunch or even the restroom. The Pitch Deck Template — Welcome to TheFamily. Selling Yourself without Selling Out A Leaders Guide to Ethical Self Promotion. Win an Argument by Asking the Other Person to Outline a Plan. Role of Power in Effective Leadership. Five Bases of Power. 7 Sources of Leadership Power. One can define leadership as influencing the activities of others toward accomplishing a goal. 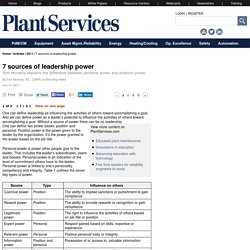 And we can define power as a leader’s potential to influence the activities of others toward accomplishing a goal. Without a source of power there can be no leadership. One can define two power bases: position and personal. Position power is the power given to the leader by the organization. It’s the power granted to the leader based on the job title.