Les romans incontournables de vos libraires. Review: The Boy with the Cuckoo-Clock Heart by Mathias Malzieu : Bart's Bookshelf. If you're new here, you may want to subscribe to my RSS feed. 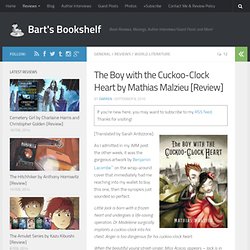 Thanks for visiting! [Translated by Sarah Ardizzone] As I admitted in my IMM post the other week, it was the gorgeous artwork by Benjamin Lacombe** on the wrap-around cover that immediately had me reaching into my wallet to buy this one, then the synopsis just sounded so perfect. Little Jack is born with a frozen heart and undergoes a life-saving operation. Dr Madeleine surgically implants a cuckoo-clock into his chest. When the beautiful young street-singer, Miss Acacia, appears – Jack is in danger of more than just falling in love. This is a fairy tale for adults, but like proper fairy tales of old, this isn’t a tale that’s fluffy and light.

I’m slightly at odds with this one, I did really enjoy it, but I thought that sometimes it played to its ‘adultness’ when there wasn’t any real need to. Did it detract from my overall enjoyment? The Boy with the Cuckoo-Clock Heart by Mathias Malzieu. GENRE: fairytale for adults SUMMARY:Edinburgh, 1874. 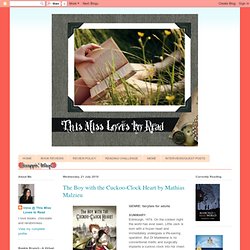 On the coldest night the world has ever seen, Little Jack is born with a frozen heart and immediately undergoes a life-saving operation. But Dr Madeleine is no conventional medic and surgically implants a cuckoo clock into his chest. Little Jack grows different from other children: every day begins with a daily wind-up. At school he is bullied for his ‘ticking’, but Dr Madeleine reminds him he must resist strong emotion: anger is far too dangerous for his cuckoo-clock heart. The protagonist is Jack, a boy who has a cuckoo-clock heart because he was born with a frozen heart. Firstly, don’t touch the hands of your cuckoo-clock heart. This is a pretty haunting and disconcerting set of rules, but Jack ignores them and goes in search of his love.

This little book (it only has 176 pages) has many wonderful, touching, as well as sad moments and those moments that make you think. Apart from that, this story is really amazing. . (4.5 stars) The boy with the cuckoo-clock heart. The Boy with the Cuckoo-Clock Heart by Mathias Malzieu translated from French by Sarah Ardizzone Alfred A. 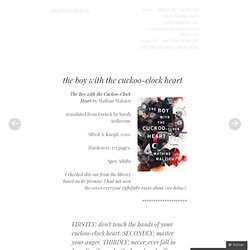 Knopf, 2010. Hardcover, 172 pages. Ages: Adults I checked this out from the library based on its premise. FIRSTLY: don’t touch the hands of your cuckoo-clock heart. Mathias Malzieu’s The Boy with the Cuckoo-Clock Heart is a lovely dark tale about hearts that won’t let go. I can say I enjoyed the read.

Edinburgh and its steep streets are being transformed. Malzieu has a way with images and that alone is worth the read. The fairy tale aspect to the novel is convenient. The narrative…The narrative is a bit tricky. Another aspect of the narrative is in the first person’s singular perspective. The boy with the cuckoo-clock heart / Set in late-19th-century Europe, this slim, melancholy, and sometimes thin novel affords considerable escapist pleasures. 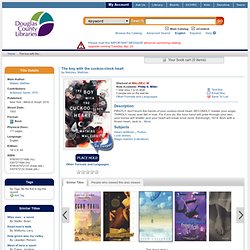 In Paris, he finds a companion in MeliEs, a lovesick, quixotic magician, and as their journey unfolds, Malzieu sketches European landscapes and crafts figurative language with irresistible relish: Miss Acacia's laugh, for instance, is "as light as beads tumbling over a xylophone. " After Jack reaches Spain and finds Miss Acacia, he embarks on a tumultuous relationship with his beloved that will alter his life forever. (less) (c) Copyright PWxyz, LLC. The boy with the cuckoo clock heart, Mathias Malzieu, Chatto And Windus, Anglais Ouvrages De Littérature, 9781409079156 sur le site de la librairie L.