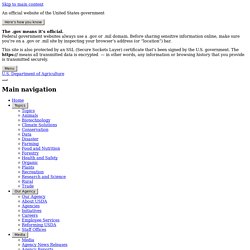 Secretary of Agriculture Sonny Perdue today outlined U.S. Department of Agriculture (USDA) services available in the event of a government shutdown. “USDA is committed to safeguarding life and property through the critical services we provide – and should the government shut down, we will continue to do just that," said Secretary Perdue. “I am proud of each USDA employee for everything they do to benefit the farmers, ranchers, foresters, and producers who depend on our services. It is their mission each day to fulfill our USDA motto, 'Do right and feed everyone.'” While you may click HERE to view USDA’s lapse in funding plans, background information on USDA services available in the event of a government shutdown are below: Food Safety and Inspection Service (FSIS): In the event of a lapse in appropriation – among other duties listed HERE (PDF, 368 KB) – FSIS will continue work to: Animal Plant and Health Inspection Service (APHIS): U.S.

REUTERS 03/10/13 USDA shutdown hobbles livestock markets, grain traders make do. NATIONAL GROCERS ASSOCIATION 30/09/13 What Grocers Need to Know in the Event of a Government Shut Down. KTTC 02/10/13 USDA meat inspectors made to work with no pay. WIKIPEDIA 01/10/13 United States federal government shutdown of 2013. A government shutdown notice posted on October 1, 2013, with the Statue of Liberty in the far background[1] During the shutdown, approximately 800,000 federal employees were indefinitely furloughed, and another 1.3 million were required to report to work without known payment dates. 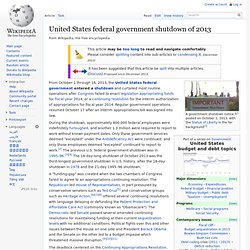 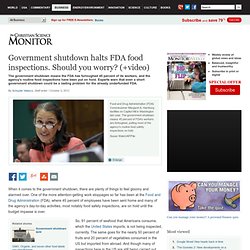 One of the more attention-getting work stoppages so far has been at the Food and Drug Administration (FDA), where 45 percent of employees have been sent home and many of the agency’s day-to-day activities, most notably food safety inspections, are on hold until the budget impasse is over. Skip to next paragraph Subscribe Today to the Monitor Click Here for your FREE 30 DAYS ofThe Christian Science MonitorWeekly Digital Edition So, 91 percent of seafood that Americans consume, which the United States imports, is not being inspected, currently. “Detection [of problems] won’t be the issue," says Neal Hooker, a professor of food policy at the John Glenn School of Public Affairs at Ohio State University in Columbus. WORLD POULTRY 01/10/13 Impact of US govt. shut-down on nation’s agri-industry.

On October 1st, the US federal government shut down and will remain closed until Congress can reach an agreement on how to fund day-to-day operations. 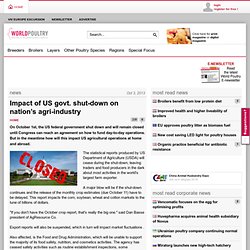 But in the meantime how will this impact US agricultural operations at home and abroad. The statistical reports produced by US Department of Agriculture (USDA) will cease during the shut-down, leaving traders and food producers in the dark about most activities in the world's largest farm exporter. A major blow will be if the shut-down continues and the release of the monthly crop estimates (due October 11) have to be delayed.

This report impacts the corn, soybean, wheat and cotton markets to the tune of billions of dollars. "If you don't have the October crop report, that's really the big one. " said Dan Basse president of AgResource Co. Export reports will also be suspended, which in turn will impact market fluctuations . MNN 01/10/13 Government shutdown: How it affects food assistance. Well, this is quite the mess we’ve woken up to this morning, isn’t it? 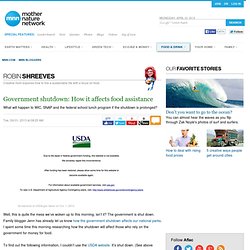 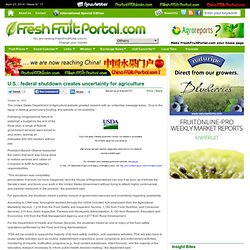 Following congressional failure to establish a budget by the end of the fiscal year, a range of federal government services were forced to shut down, leaving an estimated 800,000 workers without pay. President Barack Obama reassured the nation that work was being done to restore services and called on Congress to fulfill its budgetary responsibilities. “This shutdown was completely preventable. JDSUPRA 30/09/13 Impact of Government Shutdown on FDA and USDA. IFT 01/10/13 U.S. government shutdown’s effect on food safety, security.

According to the Des Moines Register, U.S. 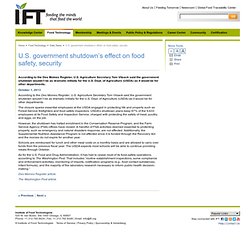 Almost half of the Food and Drug Administration (FDA) employees have been furloughed after the federal government failed to agree a budget deal by the midnight deadline. 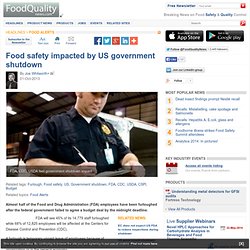 FDA will see 45% of its 14,779 staff furloughed while 68% of 12,825 employees will be affected at the Centers for Disease Control and Prevention (CDC). A furlough is temporary unpaid leave of employees because of special needs of a company due to economic conditions at the organization or in the general economy. FDA would continue activities including maintaining critical consumer protection to handle emergencies, high-risk recalls, civil and criminal investigations, import entry review, and other critical public health issues. However, the agency will be unable to support the majority of its food safety, nutrition, and cosmetics activities, according to the Department of Health and Human Services contingency plan .

CDC will be unable to support outbreak detection and infectious disease surveillance. Affected FDA services. FOOD SAFETY NEWS 03/10/13 Federal Government Shutdown: Impact on Food Safety May Compound Over Time. As the U.S. enters the third day of a federal government shutdown, meat inspectors at the U.S. 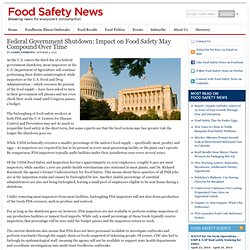 Department of Agriculture will continue performing their duties uninterrupted, while inspectors at the U.S. Food and Drug Administration – which oversees 80 percent of the food supply – have been asked to turn in their government cell phones and not even check their work email until Congress passes a budget. WASHINGTON POST 01/10/13 The nine most painful impacts of a government shutdown. The federal government shut down on Tuesday and will stay closed until Congress can reach an agreement on how to fund day-to-day operations. 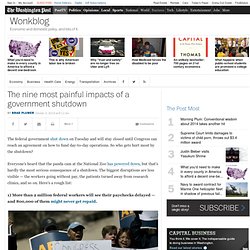 So who gets hurt most by the shutdown? Everyone's heard that the panda cam at the National Zoo has powered down, but that's hardly the most serious consequence of a shutdown. The biggest disruptions are less visible — the workers going without pay, the patients turned away from research clinics, and so on. Here's a rough list: 1) More than 2 million federal workers will see their paychecks delayed — and 800,000 of them might never get repaid. Federal employees protest the sequester outside the Department of Labor on March 20. This is, by a fair margin, the biggest immediate consequence of a shutdown. There are two classes of federal workers to consider. It's a different story for the 800,000 or so workers deemed "non-essential. " This could be a fair-sized financial hit for many workers, depending on how long the government stays shut down.

CIDRAP 01/10/13 Fed shutdown affects disease detection, food safety. The nation's first government shutdown in 17 years could have major impacts on the nation's ability to prepare for and respond to disease threats such as the approaching flu season and new viruses overseas such as H7N9 influenza and Middle East respiratory syndrome coronavirus (MERS-CoV), according to federal contingency plans.

Negotiations on a budget to fund the federal government ground to a halt overnight over disagreements in Congress about language meant to delay the Affordable Care Act. The impact on federal public health and food safety agencies was quickly seen this morning, as red-box banners went up on Web sites warning that updates would be limited, information could be out of date, and inquiries could go unanswered. Shutdown shutters flu surveillance, limits outbreak detection Barbara Reynolds, PhD, who directs the CDC's division of public affairs, told CIDRAP News yesterday that, of the agency's 13,000 employees in the states and abroad, about 4,000 will remain working.