How the oil industry pumped Americans full of fake news. The world has known about the dangers of climate change for decades — so why are oil and gas companies still drilling for crude as if there’s no tomorrow? 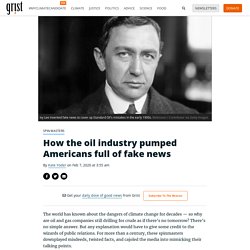 There’s no simple answer. But any explanation would have to give some credit to the wizards of public relations. For more than a century, these spinmasters downplayed misdeeds, twisted facts, and cajoled the media into mimicking their talking points. “A lot of what we have as PR today, in general, was built in service of the fossil fuel industry,” said Amy Westervelt, the host of Drilled, billed as “a true-crime podcast about climate change.” The first season of Drilled investigated the history of climate denial, and the second looked at the West Coast crabbers suing Big Oil for contributing to warmer oceans and throwing the marine food web out of whack. Pummeled By Hurricanes, Republicans In North Carolina Starting To Believe In Climate Change. For some people, the overwhelming scientific consensus is sufficient to convince people that climate change is real. 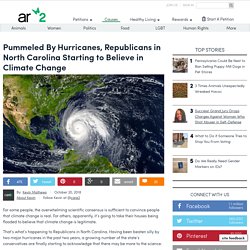 For others, apparently, it’s going to take their houses being flooded to believe that climate change is legitimate. That’s what’s happening to Republicans in North Carolina. Having been beaten silly by two major hurricanes in the past two years, a growing number of the state’s conservatives are finally starting to acknowledge that there may be more to the science. The Washington Post spoke to Margie White, a Trump supporter and senior citizen. Despite Trump, Wall Street is breaking up with fossil fuels. Bill McKibben is Schumann Distinguished Scholar in Environmental Studies at Middlebury College, and a founder of 350.org. 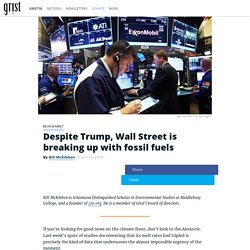 He is a member of Grist’s board of directors. If you’re looking for good news on the climate front, don’t look to the Antarctic. Last week’s spate of studies documenting that its melt rates had tripled is precisely the kind of data that underscores the almost impossible urgency of the moment. And don’t look to Washington, D.C., where the unlikely survival of EPA Administrator Scott Pruitt continues to prove the political power of the fossil fuel industry. Trump administration to replace Clean Power Plan with ‘dirty power plan’ This story was originally published by Mother Jones and is reproduced here as part of the Climate Desk collaboration. 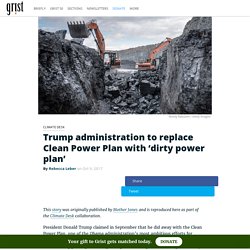 President Donald Trump claimed in September that he did away with the Clean Power Plan, one of the Obama administration’s most ambitious efforts for tackling climate change. The plan was the first to set a limit on carbon pollution from existing power plants. Dispensing with the regulation, Trump told a rally in Alabama, was simple as, “boom, gone.” Of course the reality is more complicated. Because the Clean Power Plan is a finalized regulation from the EPA, the agency also has to put forward its justification for repealing it. Your gift to Grist will get matched today. Is the climate consensus 97%, 99.9%, or is plate tectonics a hoax? Four years ago, my colleagues and I published a paper finding a 97% consensus in the peer-reviewed literature on human-caused global warming. 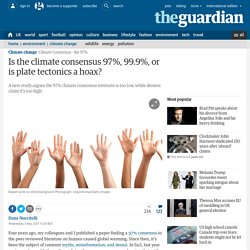 Since then, it’s been the subject of constant myths, misinformation, and denial. In fact, last year we teamed up with the authors of six other consensus papers, showing that with a variety of different approaches, we all found the expert consensus on human-caused global warming is 90–100%. Most of the critiques of our paper claim the consensus is somehow below 97%.

For example, in a recent congressional hearing, Lamar Smith (R-TX) claimed we had gone wrong by only considering “a small sample of a small sample” of climate studies, and when estimated his preferred way, it’s less than 1%. But in a paper published last year, James Powell argued that the expert consensus actually higher – well over 99%. Scientists try to replicate climate denier findings and fail. Does the Ted Cruz in you ever wonder whether global warming really is just a hoax? 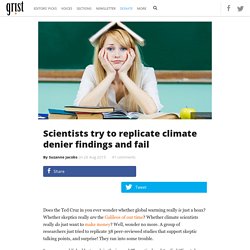 Whether skeptics really are the Galileos of our time? Whether climate scientists really do just want to make money? Well, wonder no more. A group of researchers just tried to replicate 38 peer-reviewed studies that support skeptic talking points, and surprise! Another state bans agency from discussing climate change. This story is reproduced here as part of the Climate Desk collaboration. 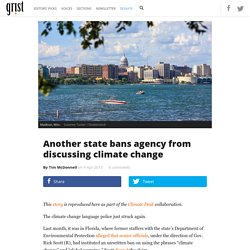 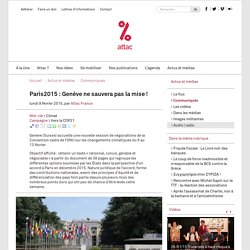 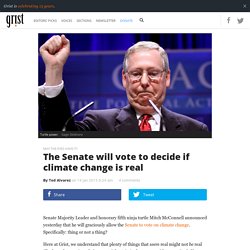 Specifically: thing or not a thing? Here at Grist, we understand that plenty of things that seem real might not be real (Drake, cake pops), and vice versa (ghosts). Even Australia is joining the climate fight. The prime minister of Australia is called Abbott. 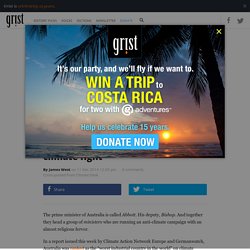 Among the world’s top 10 emitters, Germany was ranked the highest at 22. Australia was second bottom overall, above Saudi Arabia — which was not classified as industrial. The report states: “The new conservative Australian government has apparently made good on last year’s announcement and reversed the climate policies previously in effect. As a result, the country lost a further 21 positions in the policy evaluation compared to last year, thus replacing Canada as the worst-performing industrial country.” China, the world’s biggest emitter, was in 45th spot — one below the U.S., which is the world’s second largest emitter of greenhouse gases that cause climate change. In the ski business, there are no climate deniers. Snow sport season may be officially upon us, but don’t get too excited yet.

Some of California’s most beloved ski runs are looking pretty brown, making opening days a little less celebratory and a lot more troubling for skiers and snowboarders hoping to hit the slopes across the Golden State. According to research from the University of California, Berkeley’s Central Sierra Snow Lab near Lake Tahoe, last year’s snow pack was the second lowest it’s been in a whopping 90 years, topping just 52 inches. Yes, we can beat climate change — but it will take massive international government coordination. One of my recurring obsessions over the years has been the enormous difference between reducing carbon emissions and reducing carbon emissions enough. There are thousands of ways to reduce emissions relative to a business-as-usual baseline, many of which are relatively painless. But reducing emissions enough to limit temperature rise to 2 degrees Celsius — the agreed-upon international target — is another matter entirely.

Plenty of policies and strategies can achieve the former but not the latter. Climat: les lenteurs et contradictions de la politique américaine - Page 2. China to limit carbon emissions for first time, climate adviser claims. China, the world's biggest greenhouse gas emitter, will limit its total emissions for the first time by the end of this decade, according to a top government advisor. He Jiankun, chairman of China's Advisory Committee on Climate Change, told a conference in Beijing on Tuesday that an absolute cap on carbon emissions will be introduced.

"The government will use two ways to control CO2 emissions in the next five-year plan, by intensity and an absolute cap," Reuters reported He as saying. Though not a government official, He is a high level advisor. However, Jiankun later in the day appear to row back on the comments. Climat: l'âge de la pénombre. Preventing climate change and adapting to it are not morally equivalent. Climate hawks are familiar with the framing of climate policy credited to White House science advisor John Holdren, to wit: We will respond to climate change with some mix of mitigation, adaptation, and suffering; all that remains to be determined is the mix.