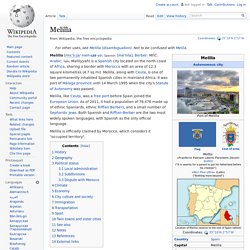 Melilla, along with Ceuta, is one of two permanently inhabited Spanish cities in mainland Africa. It was part of Málaga province until 14 March 1995 when the city's Statute of Autonomy was passed. Melilla, like Ceuta, was a free port before Spain joined the European Union. As of 2011[update], it had a population of 78,476 made up of ethnic Spaniards, ethnic Riffian Berbers, and a small number of Sephardic Jews. Both Spanish and Riffian-Berber are the two most widely spoken languages, with Spanish as the only official language. Melilla is officially claimed by Morocco, which considers it "occupied territory". History[edit] In 1893, the Rif Berbers launched the First Melillan campaign and 25,000 Spanish soldiers had to be dispatched against them. Ceuta. Ceuta (assimilated pronunciation /ˈsjuːtə/ SEW-tə, also /ˈseɪʊtə/ SAY-uu-tə;[2] Spanish: [ˈθeuta]; Arabic: سبتة‎‎, Sabtah; Berber: Sebta) [a] is an 18.5-square-kilometre (7.1 sq mi) Spanish city located on the north coast of Africa, sharing a western border with Morocco. 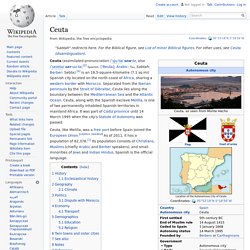 Separated from the Iberian peninsula by the Strait of Gibraltar, Ceuta lies along the boundary between the Mediterranean Sea and the Atlantic Ocean. Ceuta, along with the Spanish exclave Melilla, is one of two permanently inhabited Spanish territories in mainland Africa. It was part of Cádiz province until 14 March 1995 when the city's Statute of Autonomy was passed.

Ceuta, like Melilla, was a free port before Spain joined the European Union. [citation needed] As of 2011, it has a population of 82,376.[1] Its population consists of Christians, Muslims (chiefly Arabic and Berber speakers), and small minorities of Jews and Indian Hindus. History[edit] A street of Ceuta, c. 1905–1910 Calle de Compañía del Mar in Ceuta. Western Sahara. Coordinates: The Western Sahara ( i/ˌwɛstərn səˈhaːrə/; Arabic: الصحراء الغربية‎ aṣ-Ṣaḥrā’ al-Gharbīyah; Spanish: Sahara Occidental; Berber: Taneẓroft Tutrimt) is a disputed territory in the Maghreb region of North Africa, bordered by Morocco to the north, Algeria to the northeast, Mauritania to the east and south, and the Atlantic Ocean to the west. 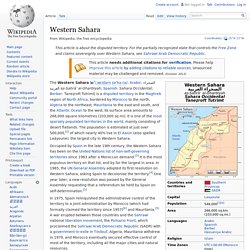 Its surface area amounts to 266,000 square kilometres (103,000 sq mi). It is one of the most sparsely populated territories in the world, mainly consisting of desert flatlands. The population is estimated at just over 500,000,[2] of which nearly 40% live in El Aaiún (also spelled Laâyoune), the largest city in Western Sahara. Occupied by Spain in the late 19th century, the Western Sahara has been on the United Nations list of non-self-governing territories since 1963 after a Moroccan demand.[3] It is the most populous territory on that list, and by far the largest in area. 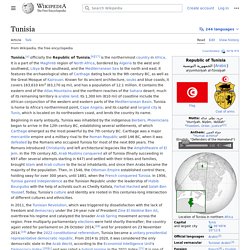 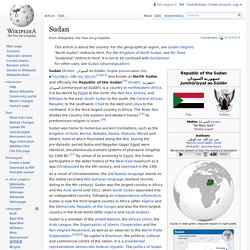 It is not to be confused with Sundanese. Sudan (Arabic: السودان‎‎ as-Sūdān, English pronunciation (US) i/suˈdæn/, (GB) /suːˈdɑːn/),[12][13] also known as North Sudan and officially the Republic of the Sudan[14] (Arabic: جمهورية السودان‎‎ Jumhūriyyat as-Sūdān), is a country in northeastern Africa. Morocco. Country in Northwestern Africa Coordinates: 32°N 6°W / 32°N 6°W / 32; -6. 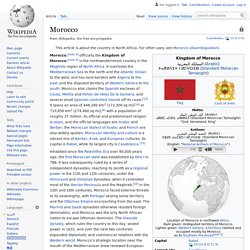 Libya. Country in north Africa Libya (; Arabic: ليبيا‎, romanized: Lībiyā), officially the State of Libya,[dubious ][6][7][8][9] is a country in the Maghreb region in North Africa, bordered by the Mediterranean Sea to the north, Egypt to the east, Sudan to the southeast, Chad to the south, Niger to the southwest, Algeria to the west, and Tunisia to the northwest. 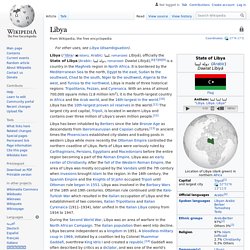 The sovereign state is made of three historical regions: Tripolitania, Fezzan and Cyrenaica. With an area of almost 1.8 million square kilometres (700,000 sq mi), Libya is the fourth largest country in Africa, and is the 16th largest country in the world.[10] Libya has the 10th-largest proven oil reserves of any country in the world.[11] The largest city and capital, Tripoli, is located in western Libya and contains over one million of Libya's six million people.[12] The second-largest city is Benghazi, which is located in eastern Libya.

Libya has been inhabited by Berbers since the late Bronze Age. Etymology[edit] Algeria. Coordinates: Algeria (Arabic: الجزائر‎ al-Jazā'ir), officially People's Democratic Republic of Algeria, is a country in North Africa on the Mediterranean coast. 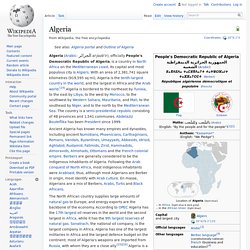 Its capital and most populous city is Algiers. North Africa. Northernmost region of Africa Population density of Africa (2000) North Africa is a region encompassing the northern portion of the African continent. 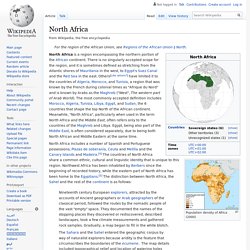 There is no singularly accepted scope for the region, and it is sometimes defined as stretching from the Atlantic shores of Mauritania in the west, to Egypt's Suez Canal and the Red Sea in the east. Others[Like whom?] Have limited it to the countries of Algeria, Morocco, and Tunisia, a region that was known by the French during colonial times as "Afrique du Nord" and is known by Arabs as the Maghreb ("West", The western part of Arab World). North Africa includes a number of Spanish and Portuguese possessions, Plazas de soberanía, Ceuta and Melilla and the Canary Islands and Madeira.[4] The countries of North Africa share a common ethnic, cultural and linguistic identity that is unique to this region.