INTERNATIONAL JOURNAL OF ECOLOGY 21/09/20 Metallic Contamination of the Muscles of Three Fish Species from the Moulouya River (Lower Moulouya, Eastern Morocco) This study introduces a spatiotemporal evaluation of the metallic contamination with three trace metals (mercury, lead, and cadmium) in the muscles of three fish species (Lepomis macrochirus, Barbus callensis, and Barbus nasus), of which the samples were taken from three stations in the Moulouya River: the confluence of the Moulouya River and the Sebra River (station 1), the neighbourhood of the farms in the region of Aklim downstream from confluence of Lakhmis river (station 2), and the level of ancient bridge of Ras El Ma-Moulouya (station 3), during the period from July 2017 to May 2018. 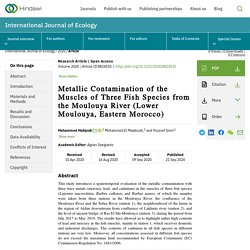 The results have allowed us to highlight rather high contents of lead and mercury in the fish muscles, mainly in station 1, which receives domestic and industrial discharges. The contents of cadmium in all fish species in different stations are very low. 1. Introduction The Moulouya River, which extends over a 520 km length, is considered to be the blue artery of the eastern region of Morocco. 2. 3.

Journal of Geography and Geology; Vol. 8, No. 3; 2016 A Study on Heavy Metal Content of Sardine (Sardina Pilchardus) Caught in the Dardanelles. J Fac Med Baghdad 2016 ; Vol.58, No .4 Determination of some heavy metals in canned Sardines fish from Iraqi markets. Achievements in the Life Sciences Volume 9, Issue 2, December 2015, Assessment of Organochlorine Pesticide Residues in Water, Sediments and Fish from Lake Tashk, Iran. Abstract In this study, the levels of organochlorine (OC) pesticide residues in Lake Tashk have been investigated using water, sediment and fish (carp) samples as a case study to find out the extent of pesticide contamination and accumulation in the lake. 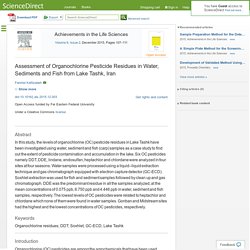 Six OC pesticides namely DDT, DDE, lindane, endosulfan, heptachlor and chlordane were analyzed in four sites at four seasons. Water samples were processed using a liquid–liquid extraction technique and gas chromatograph equipped with electron capture detector (GC-ECD). Soxhlet extraction was used for fish and sediment samples followed by clean up and gas chromatograph. DDE was the predominant residue in all the samples analyzed, at the mean concentrations of 0.075 ppb, 8.750 ppb and 4.446 ppb in water, sediment and fish samples, respectively. Keywords Organochlorine residues; DDT; Soxhlet; GC-ECD; Lake Tashk Introduction Organochlorine (OC) pesticides are among the agrochemicals that have been used extensively for long periods.

The Egyptian Journal of Aquatic Research Volume 40, Issue 2, 2014, Organochlorines and their risk in marine shellfish collected from the Mediterranean coast, Egypt. Abstract Shellfish is a useful tool for active environmental biomonitoring. 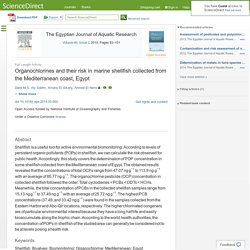 According to levels of persistent organic pollutants (POPs) in shellfish, we can calculate the risk observed for public health. Accordingly, this study covers the determination of POP concentration in some shellfish collected from the Mediterranean coast of Egypt. The obtained results revealed that the concentrations of total OCPs range from 47.07 ng g−1 to 113.9 ng g−1 with an average of 85.77 ng g−1. 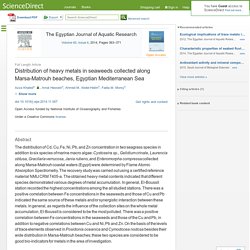 The recovery study was carried out using a certified reference material NMIJ CRM 7405-a. The obtained heavy metal contents indicated that different species demonstrated various degrees of metal accumulation. In general, El-Boussit station recorded the highest concentrations among the all studied stations. There was a positive correlation between Fe concentrations in the seaweeds and those of Cu and Pb indicated the same source of these metals and/or synergistic interaction between these metals. JOURNAL OF FOOD SCIENCE - 2015 - Seasonal survey of contaminants (Cd and Hg) and micronutrients (Cu and Zn) in edible tissues of cephalopods from Tunisia: assessment of risk and nutritional benefits. 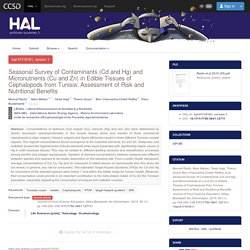 International Journal of Fisheries and Aquaculture - SEPT 2013 - Accumulation of some potentially toxic metals and polycyclic ar. African Journal of Agricultural Research Vol. 7(20), pp. 3049-3059, 26 May, 2012 Effect of industrial and agricultural pollutant. The ScientificWorld Journal Volume 2012, The Distribution between the Dissolved and the Particulate Forms of 49 Metals across th. 9. Levels%20of%20selected%20metals%20in%20canned%20fish%20consumed%20in%20Kingdom%20of%20Saudi%20Arabia.