Believe it or not, the Deepwater Horizon oil spill was even worse than previously thought. Deepwater Horizon disaster altered building blocks of ocean life. This story was originally published by the Guardian and is reproduced here as part of the Climate Desk collaboration. 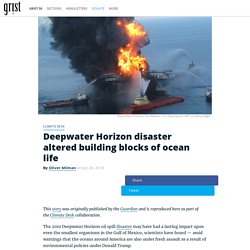 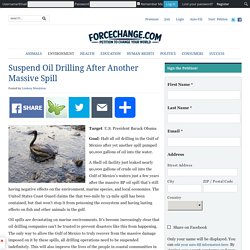 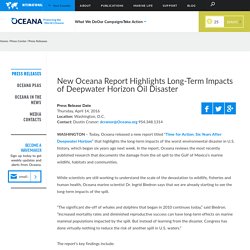 In the report, Oceana reviews the most recently published research that documents the damage from the oil spill to the Gulf of Mexico’s marine wildlife, habitats and communities. While scientists are still working to understand the scale of the devastation to wildlife, fisheries and human health, Oceana marine scientist Dr. Ingrid Biedron says that we are already starting to see the long-term impacts of the spill. “The significant die-off of whales and dolphins that began in 2010 continues today,” said Biedron. “Increased mortality rates and diminished reproductive success can have long-term effects on marine mammal populations impacted by the spill.

Live Stream - The Rising. For us to use this in the film, we need you to tell us your name and email in the video. 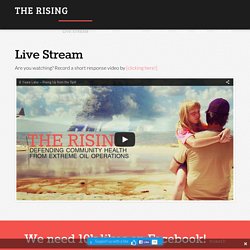 See disclaimer below. Disclaimer: I understand that Conception Media is producing a videotape program and that my name, likeness, image, voice, appearance and performance is being recorded and made a part of that production (“Product”). I grant Conception Media and its designees the right to use my name, likeness, image, voice, appearance and performance as embodied in the Product whether recorded on or transferred to videotape, film, slides, photographs, audiotapes or other media, now known or later developed. Take a stand for dolphins and Gulf communities.

Photo credit: Gregory "Slobirdr" Smith, CC by 2.0 It’s been five years since the BP oil spill disaster first devastated wetlands, beaches, and wildlife habitats in the Gulf, and the impacts are still far from over. 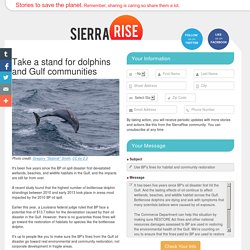 A recent study found that the highest number of bottlenose dolphin strandings between 2010 and early 2013 took place in areas most impacted by the 2010 BP oil spill. Earlier this year, a Louisiana federal judge ruled that BP face a potential fine of $13.7 billion for the devastation caused by their oil disaster in the Gulf. How Oil Is Breaking Tuna's Heart. The effects of the 2010 oil spill in the Gulf of Mexico are still being felt, and two animal populations are really feeling the pain: tuna and dolphins. 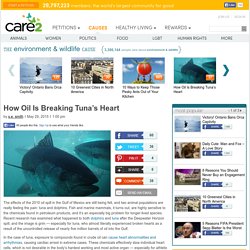 Fish and marine mammals, it turns out, are highly sensitive to the chemicals found in petroleum products, and it’s an especially big problem for longer-lived species. Tell EPA: End the Use of Toxic Dispersants. Lawsuit Dismissed: Oil Companies Not Liable for Louisiana's Coastal Damage. Are oil and gas companies responsible for coastal damage in Louisiana? 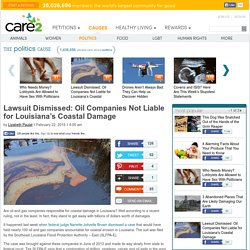 Well according to a recent ruling, not in the least. In fact, they stand to get away with billions of dollars worth of damages. It happened last week when federal judge Nanette Jolivette Brown dismissed a case that would have held nearly 100 oil and gas companies accountable for coastal erosion in Louisiana. The suit was filed by the Southeast Louisiana Flood Protection Authority – East (SLFPA-E). The case was brought against these companies in June of 2013 and made its way slowly from state to federal court. Are Dolphins Still Dying Because of the BP Oil Spill? It has been five years since the fateful Deepwater Horizon/BP oil spill in the Gulf of Mexico. 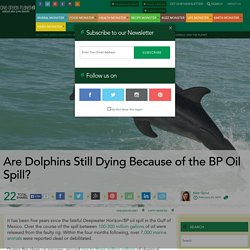 Over the course of the spill between 100-300 million gallons of oil were released from the faulty rig. Within the four months following, over 7,000 marine animals were reported dead or debilitated. Mining the moon is a thing that could actually happen. Dispatch from our dystopian future: We did it, everyone. 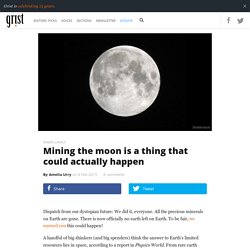 All the precious minerals on Earth are gone. There is now officially no earth left on Earth. To be fair, we warned you this could happen! A handful of big-thinkers (and big spenders) think the answer to Earth’s limited resources lies in space, according to a report in Physics World. From rare earth metals — soon to be renamed “abundant moon metals” — to plenty of ice for outer space rocket fuel, the Earth’s most charismatic satellite has it all. 1. Our robot overlords (aka iPhones) require certain elements which only occur very rarely on Earth, like ytterbium. As for mining the rare-earth elements on the Moon, China is making the most noticeable headway. Where Did the BP Deepwater Horizon Oil Go?

You may remember images like this one following the BP Deepwater Horizon oil disaster—oil smeared across Gulf Coast beaches like a dirty bathtub ring. 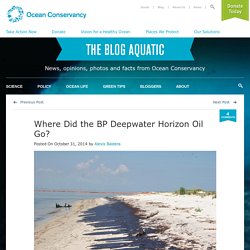 New research released this week suggests that a similar oily bathtub ring is lying on the bottom of the Gulf of Mexico. Tell BP to Pay Up - Ocean Conservancy. Will fracking in the Gulf of Mexico lead to the next Deepwater Horizon? If you read the financial papers, you may be aware that the Gulf of Mexico is looking like a giant, underwater piggybank. New advances in seismic technology, and more powerful equipment developed for fracking operations, have turned oil fields that were thought to be extinct into gold rush territory again. The same dynamic that has led to oil booms in previously quiet regions of the Great Plains and Appalachia is now moving to the less-populated — but at least equally ecologically fragile — offshore drilling zone. Three Gulf Coast victories scored since the BP spill.

You will hear a lot of gloomy reports about the state of the Gulf Coast as we approach the fourth-year commemoration of the BP Deepwater Horizon oil spill disaster on April 20. And that’s fair. BP deserves little cheer in the face of widespread health problems across the Gulf, for both humans and marine animals, and the disappearance of entire fishing communities. Despite what BP is telling us, it ain’t all good. But it ain’t all bad, either. Numbers on the board: The Gulf Coast, four years after the BP disaster. How could you relate when you ain’t never been great? And rely on oil money to keep food up on your plates? I might sell a rig on my birthday36 years of doing dirt like it’s Earth Day. Gulf fisherman: “There is no life out there” If it’s true that oysters are aphrodisiacs, then BP has killed the mood. Louisiana’s oyster season opened last week, but thanks to the mess that still lingers after the 2010 Deepwater Horizon disaster, there aren’t many oysters around.

“We can’t find any production out there yet,” Brad Robin, a commercial fisherman and Louisiana Oyster Task Force member, told Al Jazeera. “There is no life out there.” Many of Louisiana’s oyster harvest areas are “dead or mostly dead,” he says. In Mississippi, fishing boats that used to catch 30 sacks of oysters a day are returning to docks in the evenings with fewer than half a dozen sacks aboard. It’s not just oysters. “I’ve seen a lot of change since the spill,” [Hernando Beach Seafood co-owner Kathy] Birren told Al Jazeera. Ecosystem recovery is a slow process. Oysters: The Unsung Heroes of the Gulf of Mexico. Photo: A “living shoreline” of oyster shells just a few miles from Half Moon Reef; many Gulf Coast bays and estuaries have little to no natural oyster shell left. © Jerod Foster While oysters are one of the most delicious bivalves around, they are, more importantly, the unsung heroes of the Gulf of Mexico.

They play a vital role in protecting our shorelines and the health of our oceans, and contribute tremendously to the economic vitality of the five states whose future is intertwined with that of the Gulf: Texas, Louisiana, Mississippi, Alabama and Florida. That’s why The Nature Conservancy is working to restore Half Moon Reef, an underwater oyster colony in the heart of Matagorda Bay, which is one of the most productive fisheries for blue crabs, oysters and shrimp in Texas.