James Patterson - In Photos: The World's Top-Earning Authors 2015. Ten Most Famous Authors of All Time. She was an American writer but had a British nationality. 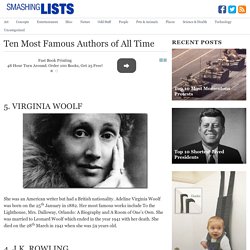 Adeline Virginia Woolf was born on the 25th January in 1882. Her most famous works include To the Lighthouse, Mrs. Dalloway, Orlando: A Biography and A Room of One’s Own. She was married to Leonard Woolf which ended in the year 1941 with her death. She died on the 28th March in 1941 when she was 59 years old. Most of you young ones out there probably were not familiar with the writers mentioned above but J.K. His actual name is Eric Arthur Blair and he was born on the 25th June of 1903. Charles John Huffan Dickens was born on the 7th February of 1812. William Shakespeare needs absolutely no introduction at all. Best Sellers. HISTORY OF WRITING. Most popular book genres of all time. The new infographic not only lists best-selling books of all time, but also estimates sales in most popular book genres. 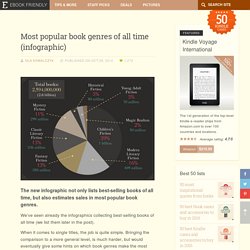 We’ve seen already the infographics collecting best-selling books of all time (we list them later in the post). When it comes to single titles, the job is quite simple. Bringing the comparison to a more general level, is much harder, but would eventually give some hints on which book genres make the most money. The new infographic, designed by UK-based creative search agency Mediaworks for Furniture UK, does just that. It may seem inaccurate, and you might question the split of titles between genres, but the chart is definitely worth analyzing. Every module includes info about a specific book, complete with extra figures, and approximate number of copies sold.

Obviously, the chart doesn’t include all categories. Children’s fiction,fantasy,mystery,classic literary fiction (up to 1950s),modern literary fiction (after 1950s),magic realism,historical fiction,YA fiction. Quotes About Writing Process (584 quotes) Best Selling Books of All Time (100 books) Formula follows the evolution of writing styles. The Daily Routines of 12 Famous Writers. How many people die with their best work still inside them? 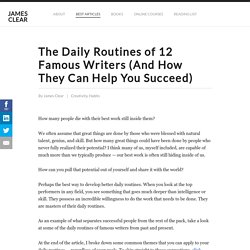 We often assume that great things are done by those who were blessed with natural talent, genius, and skill. But how many great things could have been done by people who never fully realized their potential? I think many of us, myself included, are capable of much more than we typically produce — our best work is often still hiding inside of us.

How can you pull that potential out of yourself and share it with the world? Perhaps the best way to develop better daily routines. As an example of what separates successful people from the rest of the pack, take a look at some of the daily routines of famous writers from past and present. At the end of the article, I broke down some common themes that you can apply to your daily routines — regardless of your goals. E.B. In an interview with The Paris Review, E.B. I never listen to music when I’m working. Best Young Adult Novels, Best Teen Fiction, Top 100 Teen Novels. It's almost a cliche at this point to say that teen fiction isn't just for teens anymore. 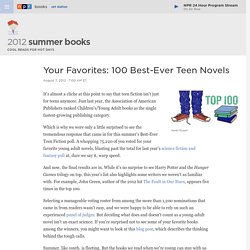