NFL.com Photos - The covers of the Madden video game. Lawsuit Filed Against EA Over Buggy Battlefield 4. EA calls it "meritless" & is confident the case will be dismissed. 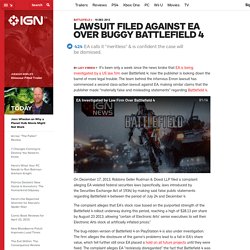 By Lucy O'BrienIt's been only a week since the news broke that EA is being investigated by a US law firm over Battlefield 4; now the publisher is looking down the barrel of more legal trouble. The team behind the infamous Enron lawsuit has commenced a second class-action lawsuit against EA, making similar claims that the publisher made "materially false and misleading statements" regarding Battlefield 4. On December 17, 2013, Robbins Geller Rudman & Dowd LLP filed a complaint alleging EA violated federal securities laws (specifically, laws introduced by the Securities Exchange Act of 1934) by making said false public statements regarding Battlefield 4 between the period of July 24 and December 4. Judge Sides With EA in Battlefield 4 Class Action Lawsuit. Plaintiffs will be given until November 3 to revise their complaint. 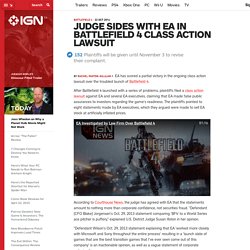 By Rachel Paxton-GillilanEA has scored a partial victory in the ongoing class action lawsuit over the troubled launch of Battlefield 4. After Battlefield 4 launched with a series of problems, plaintiffs filed a class action lawsuit against EA and several EA executives, claiming that EA made false public assurances to investors regarding the game's readiness. The plaintiffs pointed to eight statements made by EA executives, which they argued were made to sell EA stock at artificially inflated prices. According to Courthouse News, the judge has agreed with EA that the statements amount to nothing more than corporate confidence, not securities fraud. "Defendant [CFO Blake] Jorgensen's Oct. 29, 2013 statement comparing 'BF4' to a World Series ace pitcher is puffery," explained U.S. But despite these blows, the case isn't over quite yet. EA Faces Third ‘Battlefield 4′ Lawsuit; Analyst Suggests Franchise Is Tarnished. NFL players target Madden in EA lawsuit.

Yahoo may be trying to become again the search giant it once was. 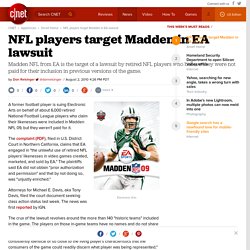 The company has rewritten its pact with its longtime partner Microsoft, which manages search technology for Yahoo. Since the deal was inked in 2009, users typing a query into Yahoo's search bar have gotten information via Microsoft. But that could change. Yahoo released new details about the agreement in a government filing on Monday. The new stipulations give Yahoo more flexibility in what results the search engine returns, and also gives each of the companies the option of ending the deal at any moment during or after October 2015.

The filing hit a day before Yahoo announced financial results for the first quarter, signaling to investors that Yahoo is making plans for its future in search. As it prepares, its current business is still sputtering. The slumping numbers highlight Yahoo's plight as it tries to turn around a shrinking advertising business. For Mayer, the stakes are high. EA Must Face Madden NFL Lawsuit From Retired Players - GameSpot. Gamepolitics. A U.S. 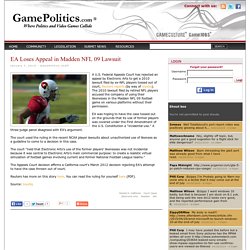 Federal Appeals Court has rejected an appeal by Electronic Arts to get a 2010 lawsuit filed by ex-NFL players tossed out of court, Reuters reports (by way of Joystiq). The 2010 lawsuit filed by retired NFL players accused the company of using their likenesses in the Madden NFL 09 football game on various platforms without their permission. EA was hoping to have the case tossed out on the grounds that its use of former players was covered under the First Amendment of the U.S.

Constitution a "incidental use. " A three-judge panel disagreed with EA's argument. The court used the ruling in the recent NCAA player lawsuits about unauthorized use of likeness as a guideline to come to a decision in this case. The court "held that Electronic Arts's use of the former players' likenesses was not incidental because it was central to Electronic Arts's main commercial purpose: to create a realistic virtual simulation of football games involving current and former National Football League teams.

" By the numbers: teens and video games. OTL: The Franchise. Encyclopedia Britannica. Video game series Click anywhere inside the article to add text or insert superscripts, subscripts, and special characters. 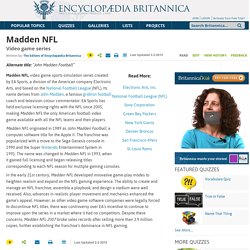 You can also highlight a section and use the tools in this bar to modify existing content: We welcome suggested improvements to any of our articles. You can make it easier for us to review and, hopefully, publish your contribution by keeping a few points in mind: Encyclopaedia Britannica articles are written in a neutral, objective tone for a general audience. You may find it helpful to search within the site to see how similar or related subjects are covered. 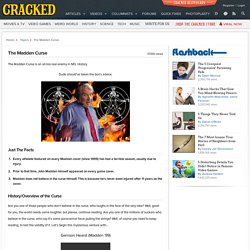 Just The Facts Every athelete featured on every Madden cover (since 1999) has had a terrible season, usually due to injury. Prior to that time, John Madden himself appeared on every game cover. Five Interesting Facts On 'Madden NFL' Game Franchise. 24 years ago, EA and John Madden burst onto the scene with the very first Madden Football video game title. 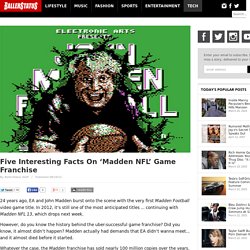 In 2012, it's still one of the most anticipated titles ... continuing with Madden NFL 13, which drops next week. However, do you know the history behind the uber-successful game franchise? Did you know, it almost didn't happen? Madden actually had demands that EA didn't wanna meet... and it almost died before it started. Madden NFL 15 Review (Standard Edition) on PlayStation 4. Publisher Electronic Arts Inc. and developer EA Tiburon continue the grand tradition of this obsession called football (U.S. version) with another successful and comprehensive remediation of the NFL experience in Madden NFL 15. 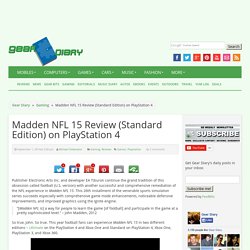 This 26th installment of the venerable sports simulation series succeeds especially with comprehensive game mode enhancements, noticeable defensive improvements, and improved graphics using the Ignite engine. “[Madden NFL is] a way for people to learn the game [of football] and participate in the game at a pretty sophisticated level.” – John Madden, 2012 So true, John. So true. This year football fans can experience Madden NFL 15 in two different editions – Ultimate on the PlayStation 4 and Xbox One and Standard on PlayStation 4, Xbox One, PlayStation 3, and Xbox 360. The Hype Welcome to Madden Season. The Reality Game players can enjoy several experiences from player, coach, and owner perspectives, which greatly expand the activity and replay level in Madden NFL 15.

NFL Week 1 predictions: Madden 15 simulation. The NFL season is back ladies and gentlemen, the wait is finally over. 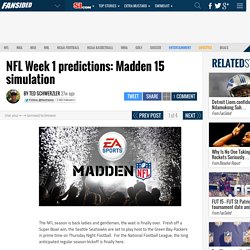 Fresh off a Super Bowl win, the Seattle Seahawks are set to play host to the Green Bay Packers in prime time on Thursday Night Football. For the National Football League, the long anticipated regular season kickoff is finally here. Here at FanSided Tech, we want to make sure you know exactly how every game is going to play out, or at least how Madden 15 sees it going. With EA Sports latest title just recently hitting the market, we are ready for Madden 15 to get things underway. Let’s get to it with Thursday night’s contest. Green Bay Packers (14) Seattle Seahawks (38) Game Stats: Russell Wilson 203 yards 4 touchdownsEddie Lacy 2 fumblesBobby Wagner 13 tackles, 1 interceptionRichard Sherman, Bruce Irvin 1 interception each. Madden - The Game. Madden NFL Anagrams. Madden NFL. Madden NFL (known as John Madden Football before 1993) is an American football video game series developed by Electronic Arts Tiburon for EA Sports. 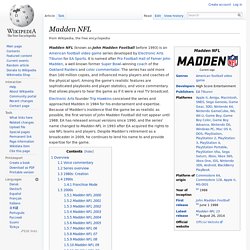 It is named after Pro Football Hall of Famer John Madden, a well-known former Super Bowl–winning coach of the Oakland Raiders and color commentator. The series has sold more than 100 million copies, and influenced many players and coaches of the physical sport. Among the game's realistic features are sophisticated playbooks and player statistics, and voice commentary that allows players to hear the game as if it were a real TV broadcast. Electronic Arts founder Trip Hawkins conceived the series and approached Madden in 1984 for his endorsement and expertise. Madden NFL - Video Game Sales Wiki - Video Game Sales, Charts, NPD, Graphs, Video Game Figures, and more!