Johnny Appleseed: From Ohio Folklore at Americanfolklore.net. An Ohio Legend retold by S.E. 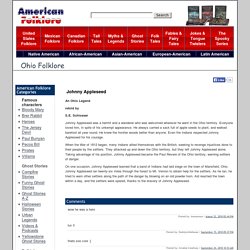 Schlosser Johnny Appleseed was a hermit and a wanderer who was welcomed wherever he went in the Ohio territory. Everyone loved him, in spite of his unkempt appearance. When the War of 1812 began, many Indians allied themselves with the British, seeking to revenge injustices done to their people by the settlers. On one occasion, Johnny Appleseed learned that a band of Indians had laid siege on the town of Mansfield, Ohio. 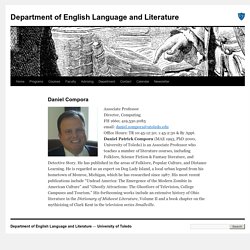 He has published in the areas of Folklore, Popular Culture, and Distance Learning. He is regarded as an expert on Dog Lady Island, a local urban legend from his hometown of Monroe, Michigan, which he has researched since 1987. Too Scary to Read! - The Top 20 Scariest Stories. Really Scary Urban Legends. Urban legends tend to focus on a current fear or cultural phenomenon of the time. 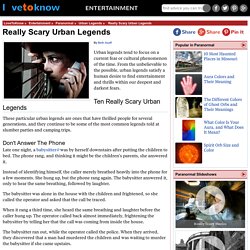 From the unbelievable to the possible, urban legends satisfy a human desire to find entertainment and thrills within our deepest and darkest fears. Ten Really Scary Urban Legends These particular urban legends are ones that have thrilled people for several generations, and they continue to be some of the most common legends told at slumber parties and camping trips. Don't Answer The Phone Late one night, a babysitter was by herself downstairs after putting the children to bed. Urban legend. Folklore. What Is Folklore? - American Folklore Society. The word "folklore” names an enormous and deeply significant dimension of culture. 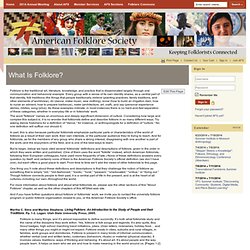 Considering how large and complex this subject is, it is no wonder that folklorists define and describe folklore in so many different ways. Try asking dance historians for a definition of "dance,” for instance, or anthropologists for a definition of "culture.” No one definition will suffice–nor should it. In part, this is also because particular folklorists emphasize particular parts or characteristics of the world of folklore as a result of their own work, their own interests, or the particular audience they’re trying to reach. And for folklorists, as for the members of any group who share a strong interest, disagreeing with one another is part of the work–and the enjoyment–of the field, and is one of the best ways to learn.

Urban Legends. Urban Legends Versus Folklore. While urban legends and folklore may be considered similar, they are actually two different sources for tales that tell culturally relevant cautionary tales. 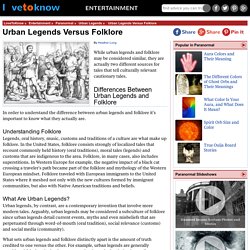 Differences Between Urban Legends and Folklore In order to understand the difference between urban legends and folklore it's important to know what they actually are. Understanding Folklore Legends, oral history, music, customs and traditions of a culture are what make up folklore. The Legend of Sleepy Hollow Summary. Ichabod Crane is a newcomer to the Hudson Valley; unlike the generations of Dutch settlers that have preceded him, he has neither the strength nor the means to become a farmer and landowner. 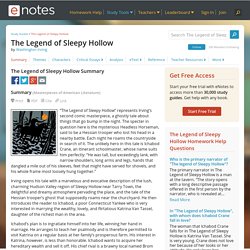 His single marketable skill is teaching, and in the isolated hamlet of Sleepy Hollow this pays meager rewards. His schoolhouse is decrepit, one large room constructed of logs; its broken windows have been patched with the leaves of old copybooks. Ichabod’s quarters are whatever rooms the neighboring Dutch farmers who board him for a week at a time are willing to provide. Ichabod thus makes the rounds of the neighborhood, and his small salary, combined with his constantly changing address, allows him to store all of his personal possessions in a cotton handkerchief.

Because he comes from Connecticut, a state whose major product is country schoolmasters, Ichabod feels both superior to the old Dutch stock of the valley and frustrated by his perpetual state of poverty. Educreations. Headless Horseman. The Headless Horseman is a fictional character who appears in a short story called “The Legend of Sleepy Hollow” which is in a collection of The Sketch Book of Geoffrey Crayon written by Washington Irving. 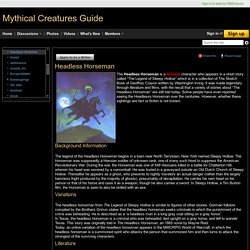 It was made legendary through literature and films, with the result that a variety of stories about “The Headless Horseman” are still told today. Some people have even reported seeing the Headlesss Horseman over the centuries. However, whether these sightings are fact or fiction is not known. Background Information. Headless Horseman.

The fictional tale of the Headless Horseman is based on some true facts. 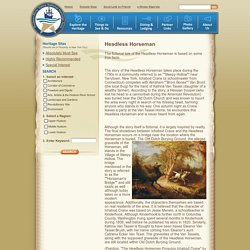 The story of the Headless Horseman takes place during the 1790s in a community referred to as ""Sleepy Hollow"" near Tarrytown, New York. Ichabod Crane (a schoolmaster from Connecticut) competes with Abraham ""Brom Bones"" Van Brunt (the local thug) for the hand of Katrina Van Tassel (daughter of a wealthy farmer). According to the story, a Hessian trooper (who lost his head to a cannonball during the American Revolution) was buried near the Old Dutch Church and was known to haunt the area every night in search of his missing head, harming anyone who stands in his way.

One autumn night as Crane leaves a party at the Van Tassel Home, he encounters this Headless Horseman and is never heard from again. Although the story itself is fictional, it is largely inspired by reality. Sasquatch: From Urban Legends at Americanfolklore.net. A California Ghost Story retold by S. 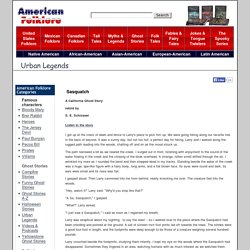 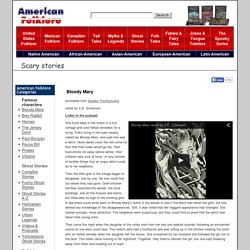