How-To Skateboarding: Build / Assemble a Skateboard with Spencer Nuzzi. Skate Framework. Obviously you need one, but the question is, which one is right for you? 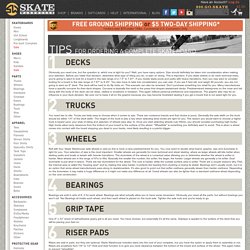 Well, you have many options. Size should definitely be taken into consideration when making your selection. Before you make that decision, determine what type of riding you do, or plan on doing. This is important. If you skate streets or do more technical tricks, you're going to want to look for a board in the size range of a 7.5" to 7.87". You need two to ride. Roll with four. Bearings are sold in sets of 8, 2 for each wheel. One 9" x 33" sheet of self-adhesive grainy grit is all you need. Risers are sold in pairs, but they are optional. Hardware is sold in a set of 8 bolts and 8 nuts. Build a Skateboard. Seems simple right? 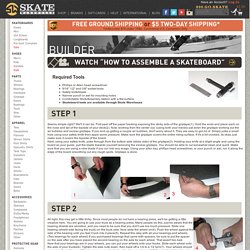 We'll it can be. First peel off the paper backing exposing the sticky side of the griptape(1). Hold the ends and place each on the nose and tail of the topside of your deck(2). Now, working from the center out, (using both your hands) pat down the griptape working out the air bubbles and excess griptape. If you end up getting a couple air bubbles, don't worry about it. All right, this may get a little tricky. You're almost ready to ride. Give your board a final look over and make sure that all of your parts are correctly assembled. Top 5 Design Innovations in Skateboarding History - Skateboarding Magazine. Over the years, the evolution of the skateboard design has had many turning points. 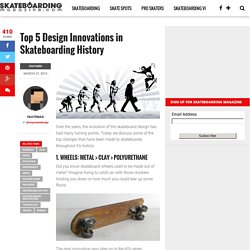 Today we discuss some of the top changes that have been made to skateboards throughout it’s history. 1. Wheels: Metal > Clay > Polyurethane Did you know skateboard wheels used to be made out of metal? Imagine trying to catch air with those clunkers holding you down or how much you could tear up some floors. The next innovation was later on in the 60’s when manufacturers started producing boards with clay wheels. History of Skateboarding - Street is Culture. It all started around the late 1940’s early 1950’s when the California surfers weren’t able to surf because the sea was too flat, no one person started skateboarding it seems to be spontaneous invention of multiple people they had the great idea to take the handles of wooden scooters or screwed roller skate wheels to 2x 4’s and started surfing the sidewalks just to get the same sensation of carving a wave but on the sidewalk. 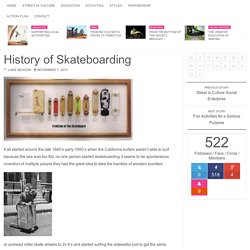 Back then the scooters and roller skates had metal wheels. 1960’s Skateboarding had become all the rage, companies such as Makaha started producing boards at this point the board didn’t have a nose or tail and were just a basic oval shape. 1963 The first skate contest was put on in Hermosa Beach, California. Competitions had started to be set up like down hill slalom and then freestyle such as Woody Woodward, Danny Berer and Torger Johnson paved the way for modern skateboarding by doing tricks like hand stands and ballet moves. The Evolution Of Skateboarding - A History From Sidewalk Surfing To Superstardom - Skateboarding Magazine - Skateboarding Magazine. It occurred to me this morning that Skateboarding has been around for quite some time now. 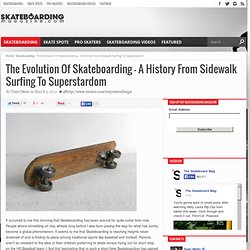 People where shredding on clay wheels long before I was born paving the way for what has surely become a global phenomenon. It seems to me that Skateboarding is reaching heights never dreamed of and is finding its place among traditional sports like baseball and football. Parents aren’t so resistant to the idea of their children preferring to skate versus trying out for short stop on the HS Baseball team. I find this fascinating that in such a short time Skateboarding has gained such ground. Lets dive a little deeper into the history that’s shaped Skateboarding today. 1950s Surers in California get the bright idea to surf concrete and invent Skateboarding. 1960s By 1963 Skateboarding was all the rage. 1970s Then like all things, in a moment, everything changed for skateboarding. 1980s & 1990s Skateboarding continues to grow as the anti-establishment subculture that we all know it as. 2000s & Now share.