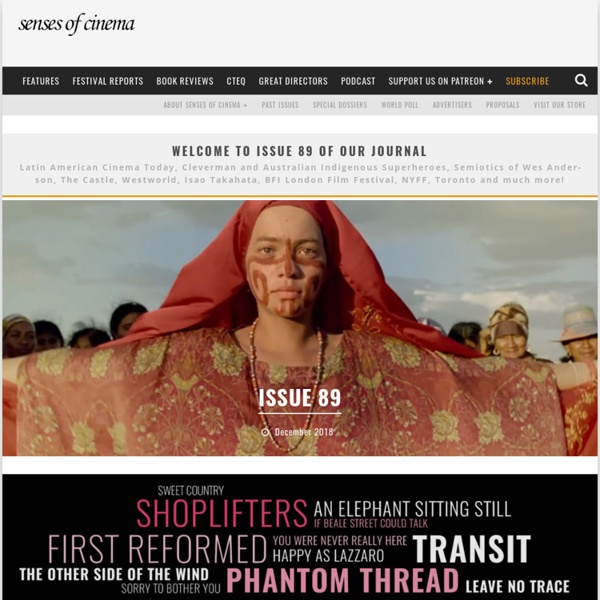 Editorial, Issue 70 | March 2014 Welcome to Issue 70 of our journal Readers may find it odd at first to see Federico Fellini’s name appear as an author on the content’s page of our current issue – perhaps for no other reason than the fact the Italian director passed away in 1993, Key Moments in Australian Cinema Key Moments in Australian Cinema Looking for Captain Thunderbolt (Cecil Holmes, 1953) by David Donaldson The Hunt: Wake in Fright (Ted Kotcheff, 1971) by Andrew McCallum Night of Fear (Terry Bourke, 1973) by William “Bill” Blick The Girlfriends (Peter Elliot, 1967) by Geoffrey Gardner “She

TSPDT - Ain't Nobody's Blues But My Own: A selection of 250 mostly obscure, mostly overlooked, and/or mostly unloved films. For the most part, TSPDT’s 1,000 Greatest Films project has garnered a generally positive reaction amongst the net’s film-list lovers. It seems to be reasonably well-liked. However, after the update of the list in January 2010 many began to question that the list was becoming a little tired and predictable. There was a whiff of discontent in the air. Slingshot! By Quinn Ginger The outskirts of Buenos Aires are grim and cluttered, and our route out of the city was lined with weathered billboards stuck like hectic postage on every flat surface. In contrast with the sleek, tech driven city center, the rim of Buenos Aires is still deeply industrial. It's a place where workers sell the hours in their day for a wage and spend the majority of their waking lives inside a factory answering to a boss. I was there to seek out another way to conduct business; One that provides lives and livelihoods separate from the hierarchical wage system, which for the past 12 years since the economic collapse has been growing in the rubble, inside large warehouses and dusty offices. For the past two months, I have been visiting, interviewing and working with the worker-owners of Argentina's empresasa recuperadas, or "taken factories".

TV is better than film Read Film Editor Dave Calhoun's retort. 1. TV takes the time to go much, much deeper At a real stretch, film directors have four hours of footage (excluding the possibility of a money-grubbing sequel or two), whereas TV directors can have anything up to 22 hours for a series. The movie industry cannot match the long-running subplots and subtle elucidation of characters’ personalities in a series like ‘Six Feet Under’, or the exquisitely paced novel-like intricacies of ‘The Wire’. Don’t believe me?

The Weekly Ansible Seabozu: the angsty self-aware monster of the dead themonstervault: “Monsters are tragic beings; they are born too tall, too strong, too heavy, they are not evil by choice. That is their tragedy"-Ishiro Honda Seabozu is an odd monster to begin with for the Vault, but I’ve chosen him because he embodies the meeting of the camp aspects of monster films and the more serious side.Appearing in an episode 35 of the original Ultraman series titled, “The Monster Graveyard,” the kaiju Seabozu is unlike any other being faced by Ultraman. GAME DEVELOPER MAGAZINE - publication terminée. Texte intégral en pdf de tous les numéros (1994-2013) NOTE: You can find out how to obtain an unofficial full copy of this archive from a third-party website by reading the info found in this tread. Game Developer, an in-depth monthly magazine for exposing 'the art and business of video games', was published by UBM Tech (which also runs Game Developers Conference and Gamasutra.com) from 1994 to 2013. Following the magazine's closure in July 2013, we've compiled an archive and made them freely available here for all to enjoy. (Also check out the Game Developer section on Gamasutra for some of the best reprinted articles from these issues.)

Opening Scenes of Alfred Hitchcock films (film directing, criticism, story settings) Borgus.com - Geography and space were important factors in Alfred Hitchcock’s storytelling technique. So much so that film scholar Paul Duncan (2003) described his formal style as merely "a series of set pieces linked together by plot." In 1934, Hitchcock wrote to readers of Film Weekly declaring his appetite for more "freshness in choice of backgrounds" citing mundane locations in other British films (Gottlieb 1995). Here we will examine more specifically the opening scenes of Alfred Hitchcock films and examine his strategy for introducing his stories to the viewer. In his opening scenes, Hitchcock established tone and setting from a point of objectivity toward the subjective, flirted with the boundaries between public space and private space, and painted a satirical world filled with a tapestry of caricatures.

Ink Tank - Make words not war The ten greatest short story writers of the twenty-first century? What, we scoff, only ten? After all, the century’s fourteen already – that’s enough time to compile a list twice as long as this one! However, we’re going to restrict ourselves to ten because we’re also interested in your input: which story writers have blown your mind since the big Y2K? Film & Video The following films are presented for educational and non-commercial use only. All copyrights belong to the artists. About UbuWeb Film & Video Neo-Griot April 8, 2014 Note from BW of Brazil: Today, we take on a topic that will undoubtedly be part of any conversation about the imagery of Brazil: sex tourism. Let’s face it, Brazil has long promoted itself as a country of sexual freedom, sensuality and beautiful women. But these images often portray Brazilian women as simply another commodity available for consumption in the global economy while ignoring the fact that these persons have lives, challenges and aspirations.

Pandora’s digital box: From the periphery to the center, or the one of many centers A laserdisc of The East Is Red; a VCD of Peking Opera Blues. DB here: On my first visit to Hong Kong in early 1995, one of my missions was to acquire video copies of all those HK films I wanted to study. The VHS tapes I’d seen in the States had grimy images and pan-and-scan framing. So, armed with my credit card, I focused on a higher-end format, the laserdisc. Left of Black Left of Black S4:E27: What is the ‘Art of Cool’ Festival? Left of Black host and Duke University Professor Mark Anthony Neal is joined in studio by Cicely Mitchell, co-founder of the Art of Cool Festival, which runs in downtown Durham, North Carolina, April 25-26, 2014. Acts scheduled to appear include Maceo Parker, The Foreign Exchange, Bilal, Alice Smith, Nnenna Freelon, + Miguel Atwood Ferguson, among others. Left of Black is a weekly Webcast hosted by Mark Anthony Neal and produced in collaboration with the John Hope Franklin Center at Duke University. Episodes of Left of Black are also available for free download in @ iTunes U

Some good criticism, some bad criticism, but always thoughtful, and well worth a look. by escouve Jun 13