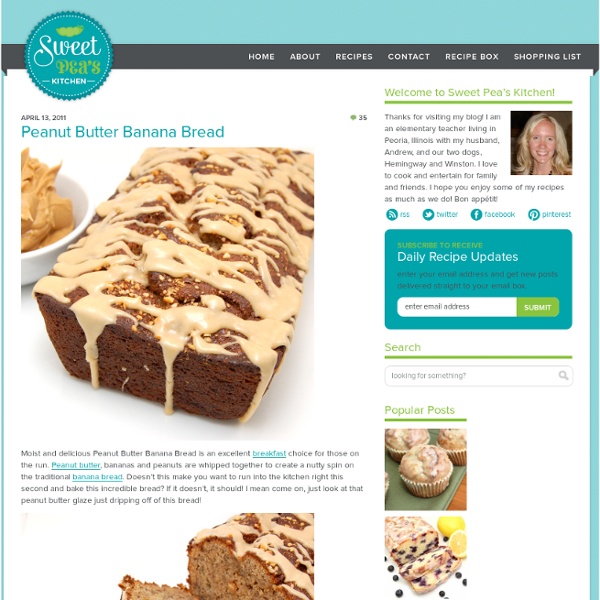 Peanut Butter Banana Bread Moist and delicious Peanut Butter Banana Bread is an excellent breakfast choice for those on the run. Peanut butter, bananas and peanuts are whipped together to create a nutty spin on the traditional banana bread. Doesn’t this make you want to run into the kitchen right this second and bake this incredible bread? If it doesn’t, it should! I mean come on, just look at that peanut butter glaze just dripping off of this bread! Would you believe me if I told you that this recipe comes from Cooking Light magazine? When this bread graced the cover of Cooking Light magazine a few months ago I knew immediately it would be a hit. Ingredients: For the Peanut Butter Glaze: 1/3 cup powdered sugar 1 tablespoon 1% low-fat milk 1 tablespoon creamy peanut butter Directions: Preheat oven to 350° F. Leave a Comment

Cinnamon Sugar Pull-Apart Bread I’m sorry. I know it’s Monday morning and you probably came here for some pretty pictures of food that you could glance at, and then move on with your day… and here I go thrusting warm, soft cinnamon sugar bread in your face. It’s not fair. I know it’s not fair. www.food.com/recipe/best-banana-bread-2886 Recipe Box Grocery List Print Share How to Make Homemade Bread (2:29) Easy Cinnamon Roll Muffins Just the thought of cinnamon rolls- warm, gooey, soft, sweet- makes me literally swoon. I love them. If I were a baking superhero (I’m working on it) my weakness would be cinnamon rolls. As much as I love the little devils (and I hate to say this) I hate to bake them. The problem is not the sweet yeast dough or the rolling or the slicing. I simply have no patience for the waiting that is required of me during the proofing, rolling, slicing and proofing again process.

sweet saturday: one minute peanut butter cake Picture this scene: it’s 8:30 in the evening. The sky is just starting to get dark outside your living room window. You ate a delicious, healthy and veggie-filled dinner a few hours ago and now you are ready to sit down to the most recent episode of So You Think You Can Dance and dive into a decadent plate of dessert. Oh wait, you have no dessert. cinnamon honey banana bread No joke, this may be the best loaf of banana bread ever made. Sometimes I buy bananas, even though I know that Chad and I won’t eat them. I do it on purpose, because I know they’ll sit there on our counter and ripen and ripen, until they’re just screaming to be made into banana bread. There are some recipes that are just better than the sum of their parts — and this banana bread is without a doubt better than bananas, honey or cinnamon on their own.

28 Muffin Recipes You’ll Want to Try I love muffins. I love them even more than cupcakes. Probably because they are so quick to make. It’s almost instant gratification from the time the muffin idea pops in your head until you’re pulling them from the oven. Pumpkin Monkey Bread September 23, 2011 | Print | E-mail | Filed under bread, pumpkin Monkey bread. It’s almost as much fun to say as it is to eat, and with the arrival of autumn, I couldn’t stop thinking about taking my usual recipe and kicking it up a notch with the addition of pumpkin – so, of course, I did. Peanut Butter-Banana Bread Recipe Last week, I had a bowl of browning bananas on the kitchen counter staring me in the face. I was about to make my grandma’s banana bread recipe, which is my all-time favorite, but at the last minute decided to try something new. Next to chocolate, banana might be my next preferred ingredient to eat with peanut butter. As a teenager, I would often eat peanut butter and banana sandwiches. Within the last year, I started eating a banana alongside a scoop of peanut butter for breakfast on mornings when I’m planning on going for a long walk, or to play tennis (obviously, in the summer!). I decided it was high-time that I infused my banana bread with some peanut butter and oh, while I was at it, throw some chocolate in there, too!

Overnight Monkey Bread After her kids were grown and starting to have kids of their own my Mom started the tradition of having everyone over for breakfast Christmas morning. She would make Monkey Bread and have it on the table for everyone to snack on while she whipped up eggs and bacon and pancakes. The sweet little puffy balls coated with cinnamon and sugar would disappear one at a time until before you knew it nothing was left.

How To Make Croissants [Chocolate Croissants, Pumpkin Spice Croissants, and Cinnamon Sugar Croissants] I hope you’re ready to see a billion underexposed photos of the same exact dough over and over and over again. Please say yes, because you will be rewarded with this. This was a… project. To say the least. I have been dying to try homemade croissants for ages, but after mention of them when I made almond joy scones, I could hardly wait. Pumpkin Banana Bread For those times when you want to come to the party with a traditional basket of baked goods, try your hand at this seasonal and delicious pumpkin banana bread! It’s not the kind of food you’d eat every day for lunch, but it’s a reasonable option for the times when you want something warm and doughy without the stomachache later. And it’s tasty enough that even your non-Paleo friends might find they prefer it to the usual slew of store-bought cookies and coffee cake. As with any grain-free bread, this one relies on some magic tricks of food science to really make it work, so you’ll want to be cautious if you have to substitute any ingredients. Everything in the list is there to enhance the taste and texture of the bread, so changing the basic ingredients of the dough will inevitably change the result. Most importantly, you can skip the honey if you’re trying to be really pure about sweeteners, but just remember that the recipe won’t be quite the same.

Coffee Cake This is a Southern Living recipe that a friend shared with me. It is a moist and delicious cake with a yummy pecan topping. It would be wonderful to bake for breakfast if you had overnight company. Actually, it would be wonderful to bake anytime, even if it's just for you. I used a petal shaped pan that I bought at Williams Sonoma about 10 years ago. Carrot Pulp Cake with Maple-Orange Cream Cheese Frosting Earlier this year I tried to make a soup out of green apple peels left over from a flurry of apple cake making. I had the best of intentions and, for a brief while, envisioned inventing something splendid. The results (I'm sad to say) were actually quite disastrous. I might even go as far as calling them disgusting. We tossed the whole (stinky) pot in the toilet and pretended like the whole thing never happened.

How to Make Peanut Butter S'Mores Turnovers Peanut Butter- S’Mores Turnovers I’m not much of a camper. My husband often takes my son on camping trips, and I happily stay behind and thank the gods for our bug-free house, cozy bed and well-stocked kitchen. I always send them off in comfort… marinate a little meat for them to throw on the grill, pack up some convenience foods and bake a few goodies too. When they return from their camping weekends, I hear mostly about the evenings sitting around the campfire. Story telling, snuggling in blankets, singing songs and roasting marshmallows for S’Mores seem to be recurring favorites.