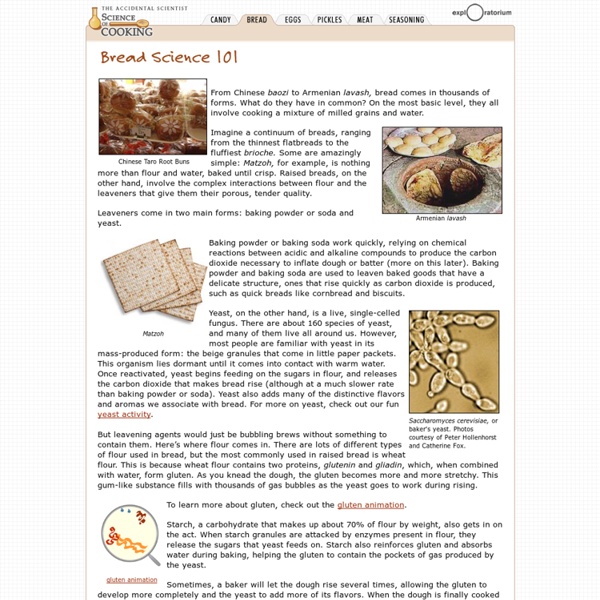 From Chinese baozi to Armenian lavash, bread comes in thousands of forms. What do they have in common? On the most basic level, they all involve cooking a mixture of milled grains and water. Imagine a continuum of breads, ranging from the thinnest flatbreads to the fluffiest brioche. Some are amazingly simple: Matzoh, for example, is nothing more than flour and water, baked until crisp. Raised breads, on the other hand, involve the complex interactions between flour and the leaveners that give them their porous, tender quality. Leaveners come in two main forms: baking powder or soda and yeast. Baking powder or baking soda work quickly, relying on chemical reactions between acidic and alkaline compounds to produce the carbon dioxide necessary to inflate dough or batter (more on this later). Yeast, on the other hand, is a live, single-celled fungus. But leavening agents would just be bubbling brews without something to contain them. For more about bread science, check out these links!

Related:  Food and Drink • Bread • Science and history of cooking

Science of Cooking: Crusty Science: Bread Find out how yeast performs its biochemical transformation of a bit of flour and water into crusty, delicious bread. Explore the history of breadmaking around the world, and learn how bread has come to occupy such a central place in the cuisines of many nations. We'll bake some bread in our studio kitchen, play with yeast and glutens in our lab, and share recipes.

Raising Agents: The Agents which give Lift to your Baking! RAISING AGENTS fall into three specific categories: Chemical, Mechanical and Natural The main two Chemical Leaveners used in Baking are: Baking Powder and Baking Soda. BAKING SODA BAKING POWDER Baking Soda vs. Baking Powder Summary Baking soda and/or baking powder are added to batters for leavening; i.e., in order to produce the gas that make cakes, muffins, and quick breads rise.Baking soda + liquid acid (in the recipe) ---> leaveningSingle-acting baking powder = baking soda + a dry acid. When the liquid ingredients are mixed with the dry ingredients you get leavening --OR-- when the product is heated you get leavening.Double-Acting baking powder = baking soda + 2 dry acids.

The Chemistry of Ginger – Flavour, Pungency & Medicinal Potential Ginger is a spice that can be commonly found in supermarkets and in the kitchen, either as the fresh root, or in dried, powdered form. It adds a strong, pungent flavour to dishes as a consequence of a number of chemical compounds it contains; additionally, these compounds are altered when the ginger is cooked or dried, producing alterations to its flavour. Some of these compounds have also been investigated for potential health benefits, including potential anti-tumour activity.

8 Tips For Better Bread Making How to Bake Great Bread at Home Many people are extremely intimidated by bread making. I’ve heard folks say everything from “I’m afraid of yeast,” to “I can’t make bread.” And that last is usually before they even try their hand at it. With the proliferation of helpful tools–everything wonderful bread cookbooks to stand mixers to electric bread makers to baking stones–one would think that bread baking has become more accessible. The History Dish: The Photographer’s Cheesecake « Four Pounds Flour A cheesecake recipe for a 19th century Photographer. The History College was one of the most difficult and demanding times of my life. Who says your diet is chemical free? · Blog Posted by Lauren Tedaldi on 19 May 2014 Today we’re launching a new edition of ‘Making Sense of Chemical Stories', to stop people being misled by chemical myths. With chemicals ever-present in the media, the guide has been revised to help people make sense of chemical stories. The guide was published in partnership with the Royal Society of Chemistry.

Paul Hollywood Here are some of my top tips to ensure your bakes are perfect every time. Lighter crustsFor a better crust, set your oven to around 220°C/425°F/Gas7 and leave a roasting tray in the bottom of the oven to heat up. When the oven reaches the right temperature and just as you put the bread in to bake, fill the tray with cold water. This creates a steam bath in the oven which helps the bread to have a lighter crust and prevents tearing. Lethal Doses of Water, Caffeine and Alcohol Click to Enlarge Today’s graphic is a whimsical look at lethal doses of chemicals we consume on a regular basis. Whilst it may be more common to view chemicals in a black and white framing of ‘toxic’ or ‘non-toxic’, the reality is more of a sliding scale of toxicity.

fabflour.co Bara Brith – Fruited bread from Wales of which there are many varieties, some made with yeast and others baking powder. Traditionally eaten sliced and buttered.Barrel – Usually made with a milk bread dough, baked in a ridged mould. Also known as a pistol.Batch – Loaf baked in a batch with others, rather than separately, wholemeal.Bloomer – Thick, long, white loaf, lightly cut across the top so that the cuts open out or ‘bloom’ to give a crisp crust. Sometimes sprinkled with poppy seeds.Buttery Rowies – Traditional Aberdeen butter yeast rolls. Shaped in a round or oval with a crisp crust and light flaky texture.Cob – Round smooth crusted loaf often topped with cracked wheat.Coburg – Round, crusty white loaf with a deeply cut cross on the top.Cornish Splits – Sweet, light yeasted buns enriched with butter and milk. Also called Devonshire splits.