Science & Environment - How big is space? 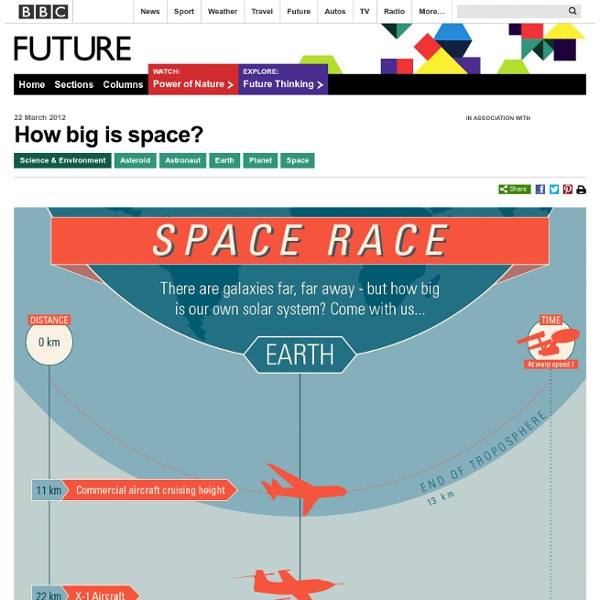 Big questions demand big answers. And here at Future we have a hard time thinking of a question bigger than: how big is space? So, we set about trying to illustrate it. The resulting picture is so large that we could not squeeze it all on to one image in Photoshop. Instead, we had to create several sections and stitch them together for you. Printed out, the graphic spans 27 pages of A4 paper. But even at this size we only managed to get to the edge of our Solar System – known as the heliosphere. Yet even within this relatively small corner of space, there is a lot packed in there. What is the most distant man-made object? Scroll (and scroll... and scroll) through our monster graphic to explore our cosmic neighbourhood. And if you want to check out the data we used to construct it, you can find it here.

SVS Animation 4000 - Moon Phase and Libration, 2013 Dial-A-Moon The animation archived on this page shows the geocentric phase, libration, position angle of the axis, and apparent diameter of the Moon throughout the year 2013, at hourly intervals. Until the end of 2013, the initial Dial-A-Moon image will be the frame from this animation for the current hour.

Anthropomorphic Creatures by Caitlin Hackett Born in 1986, Caitlin Hackett is currently based out of Brooklyn, New York where she produces awesome illustrations. SunEarthTools.com Home > Solar tools > Sun Position Back to top Content | Data + Map | Chart Polar | Chart Cartesian | Table | Annual sun path | Physics Engine Physaxe is a 2D Rigid Body Physics engine written in Haxe. It can be compiled on all platforms but has been optimized for Flash Player 9. See install: Victorian Era Names, A Writer's Guide circa 1840's-1890's Being a compilation drawn from old census and vital statistic records. A large part of creating a good set of characters in fiction writing is giving your imaginary populace good names. The right name resonates on the tongue and lingers in the mind, as just the right "fit" for who that heroic - or despicable - person was. Who can forget "Captain Ahab" and his manic pursuit of the Great White Whale, or the plain-spoken, earthy spirit of "Tom Sawyer," or the stern lyricism of "Sherlock Holmes?" The same holds true for writing stories set in the 1800's.

Australian Aboriginal Astronomy: When Giant Fish Leaves the Sky I would like to introduce our readers to a video presentation made by John Morieson and Alex Cherney about the astronomy of the Boorong clan (of the Wergaia language in northwest Victoria). John Morieson is an historian in Victoria who has spent many years researching the astronomy of the Boorong and other Victorian Aboriginal groups. He completed an MA thesis at the University of Melbourne in 1996, where he reanalysed the work of William Edward Stanbridge regarding Boorong astronomy. Alex Cherney is an amateur astronomer and astrophotographer in Melbourne. He has produced amazingly beautiful photography of the sky and has won several awards and honourable mentions in astrophotography competitions, including the STARMUS astrophotography contest, the David Malin awards, and several NASA "Astronomy Picture of the Day" posts.

This is What Happens When You Run Water Through a 24hz Sine Wave What!? How is this even possible? Because science, my friends. Brusspup’s (previously) latest video explores what happens when a stream of water is exposed to an audio speaker producing a loud 24hz sine wave. If I understand correctly the camera frame rate has been adjusted to the match the vibration of the air (so, 24fps) thus creating … magic zigzagging water.

Water has properties that are positively electrifying! Most people certainly understand how important water is for our survival, but we often overlook how weird it can be. I can compile a short, though not exhaustive, list off the top of my head: Water is less dense in solid form (ice) than in liquid form. Ice cubes float, and ice forms at the top of lakes, protecting the fish and other organisms below from the cold.