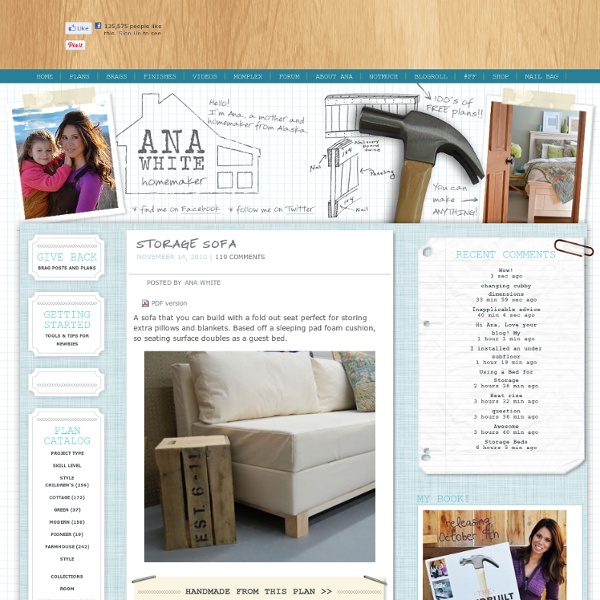 PDF version A sofa that you can build with a fold out seat perfect for storing extra pillows and blankets. Based off a sleeping pad foam cushion, so seating surface doubles as a guest bed. Handmade from this plan >> Dimensions Dimensions: I did a little tweaking on the design to decrease the cost to build (my sister wanted double cushions for the look) and also to increase the storage compartment. Materials and Tools Shopping List: 1 – 30″ x 72″ x 3 1/2″ Foam Camping Pad or Cushion 1 – 9×12 Paint Drop Cloth 6 yards upholstery batting 2 20 oz bags of pillow stuffing 2 1/2 yards of burlap staples 3″ screws or 2″ pocket hole screws 1 1/4″ screws wood glue spray adhesive 2 – 2×4 2 – 2×6 2 – 2×2 4×4 (You only need about 2 feet for the sofa legs) 1 – 12′ AND 1-8′ 2×10 2 – sheets of 1/4″ plywood Tools: measuring tape square pencil hammer safety glasses hearing protection drill circular saw nailer sander staple gun level countersink drill bit Cut List Cut List: Step 1 Back Step 2 Step 3 Back Batting Step 4 Side Batting Base

Invisible Bookshelves You've all seen these invisible bookshelves, right? The books stack horizontally and and appear to just float on the wall. They look really cool, but they can cost a bundle. Fortunately, they're easy and cheap to make from simple L-brackets. A bit of careful measuring and making sure they're level, and you're ready to start stacking. Just make sure they're well anchored to the wall! ***** It's so nice to see so many visitors to this post. I hope you'll stop by and say hello! Archive YahiniHomes: Tiny, mobile homes Danny Yahini’s tiny house company, YahiniHomes, offers the best of both worlds in the small house industry. His various custom homes are not only small and portable, but they can also be set up on a trailer, or on your choice of foundation, and then added onto later to accommodate life’s little changes. Danny, who’s based in Athens, Ohio, has been designing and building small, energy efficient homes since the 1980s. He now concentrates on building smaller, moveable homes that are affordable for his clients. He currently has four different designs: the 15′x20′ Cabin, the 8′x18′ Side Porch Cabin, the 8′x14′ Off Grid Cabin and the 8′x18′ Butterfly Cabin. The interiors of the YahiniHomes feature simple, beautiful designs, storage and versatile bed and living areas. Photos courtesy of YahiniHomes By Christina Nellemann for the [Tiny House Blog]

Got books? How about a nice Book Bookshelf? Soooooooo, our Friends of the Library have books left over after our annual Book Sale, and we offered gleaning rights to the Women's Shelter and the Children's Shelter, and the VA Hospital, and various other groups, and there were STILL books left over. I hate the thought of books going to the dumpster, or to the landfill!!! But what's a body to DO??!!! Enter the idea of a Bookshelf made from books............an d.........TA DAH! They were DOOMED , marked for DESTRUCTION .........and they've been SNATCHED from the JAWS of DEATH ITSELF! Transformed into USEFUL Shelves of BEAUTY!! As hard as it is for me to deface a book, or to disrespect one in any way: my husband says that there should be a disclaimer tag on each one saying "No book actually worth reading has been harmed in the making of this project."

Berth (sleeping) The word berth was originally used to describe beds and sleeping accommodation on boats and ships and has now been extended to refer to similar facilities on trains, aircraft, buses and trucks. A bed on a boat is sometimes known as a berth While beds on large ships are little different from those on shore, the lack of space on smaller yachts means that bunks must be fit in wherever possible. Some of these berths have specific names: Quarter berth Settee berth Pilot berth A narrow berth high up in the side of the cabin, usually above and behind the back of the settee and right up under the deck. V-berth Almost all yachts have a bed in the extreme forward end of the hull (usually in a separate cabin called the forepeak). Unless the structure of the boat renders them unnecessary (quarter berths, pilot berths with partitions), bunks on a yacht must have lee-cloths to prevent the sleeper falling out due to the motion of the vessel. Lee cloths have some secondary uses:

DIY projects for your home Things to make for your house, with instructions:Rectangle cutout bookcase, inspired by West Elm (above) at Knock Off WoodVintage deck of cards wall art by Cathe HoldenCollapsible storage boxes at Sew4HomeItems screenprinted using Mod Podge at DIY IdeasRetro room divider at RemodelaholicEco bath mat by Michelle Kaufmann at Pixei (Image from West Elm via Knock Off Wood) Drawer Shelves: After | Home Made May 13, 2011/Julie Remember my plans to add some new wall storage in the shop with some old dresser drawers? I was so excited about the drawer “shelving” that I had seen at Anthropologie in NYC that I was hoping to create a similar look in the Home Made shop. As I got into the project, I was forced to come to terms with the fact that my drawers would not look like Anthropologie’s because they just weren’t that interesting. I had to open myself up to some other inspiration. I love this photo because the view is so serene, yet the building has these unexpected bright patterned shutters (the Swiss seem to love this pattern, too!). I love red but I went with a light gray for the herringbone/chevron pattern (what is this called, anyway?) My wall is now functional and I was able to open up some space elsewhere in the shop so I can prepare for the arrival of some more inventory next week!