How To Node - NodeJS 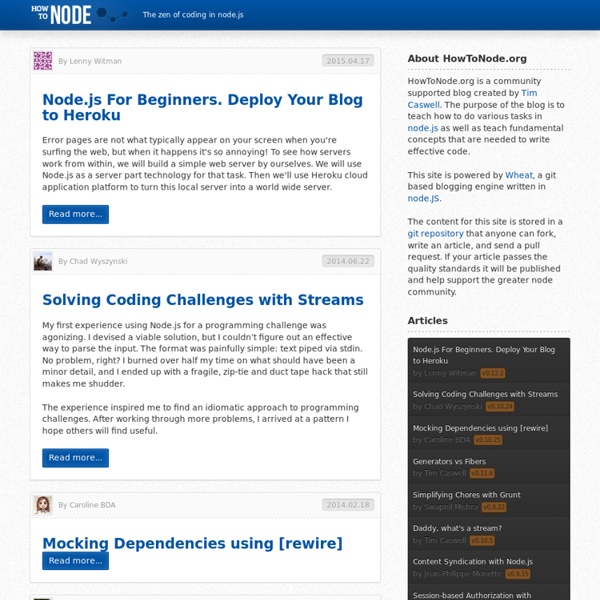 By Tim Caswell Generators vs Fibers Both ES6 generators and node-fibers can be used to block a coroutine while waiting on some I/O without blocking the entire process. This means that you can wait for an I/O result within your code but still have the performance benefits of the single-threaded, non-blocking I/O model you all know and love. Both can do this for arbitrarily deep call stacks. The main difference between the capabilities of the two is how explicit the syntax is.

Building a Login System in Node.js and MongoDB This past week I finally got around to playing with Node.js and am really impressed with how simple it was to get a server and database up and running in literally minutes. Once there, I thought a good first project to explore the platform would be to try building a simple login system analogous to what I feel like I’ve built a million times in mysql & php. So after thinking about it a bit, I knew these were the basic features I wanted to implement : Login Panel reveal.js - The HTML Presentation Framework HTML Presentations Made Easy Created by Hakim El Hattab / @hakimel Heads Up reveal.js is a framework for easily creating beautiful presentations using HTML.

Essential Node.js patterns and snippets In this post, I take a look at the different patterns that you need to know when using Node.js. These came from my own coding and from a look at the code behind Tim Caswell’s flow control libraries. I think it is necessary to know how these basic patterns are implemented even if you use a library.. 1.1 Class pattern If the class is long, then instead of doing a single Class.prototype = {…} assignment, it may be split into multiple Class.prototype.method = function () {..} assignments. Reminder: Assign all your properties some value in your constructor.

Asynchronous Control Flow with Promises Static Version A Promise is an object that represents the result of an asynchronous function call. Promises are also called futures and deferreds in some communities. Goal of this Article The goal of this article is to introduce CommonJS promises as they exist in NodeJS user-land. With jQuery popularizing a variant of CommonJS promises for AJAX operations, promises will likely gain a broader user-base in the browser and on the server.

fzysqr As promised, here is a follow up tutorial on the node.js/socket.io/backbone.js/express/connect/jade/redis stack that powers nodechat.js. The first nodechat.js tutorial introduced some fancy ideas, like using backbone.js on the server and streaming models over socket.io which is all well and great, but it left some of the more practical questions unanswered. Issues like coordinating authentication between express/connect and socket.io and creating, storing, and retrieving user profiles, are less sexy, but still quite important for real world use. So that is what the next this tutorial will look at. Practical stuff. Besides, everything is more fun when you do it in node, right?

reveal.js Device Loop Animation View the device loop A device loop animation that I created for the new slid.es home page. Flexing Pagination View Flexing Pagination A UI experiment with pagination arrows that "flex" when you hover or press them. Express - guide Getting started With node installed (download), get your first application started by creating a directory somewhere on your machine: $ mkdir hello-world Understanding process.nextTick() Static Version I have seen quite a few people being confused about process.nextTick(). Let's take a look at what process.nextTick() does, and when to use it. As you might already know, every Node application runs on a single thread. What this means is that apart from I/O - at any time, only one task/event is processed by Node's event loop. You can imagine this event loop to be a queue of callbacks that are processed by Node on every tick of the event loop.

node.js and socket.io multiroom chat tutorial – ps: it's mike i’ve been meaning to update the previous chat tutorial to include multiple rooms, here it is. what i failed to cover in the previous example was how to send messages/broadcast information with socket.io. the following examples assume you define the module: var io = require('socket.io').listen(app); io.sockets.on('connection', function (socket) { .... }); from the server, emit to the client’s socket only, using the socket callback:

Felix's Node.js Style Guide/en « Home / All Guides IMPORTANT: This version is outdated, the latest version is available on GitHub. There is no official document that governs the style of node.js applications. This guide is my opinionated attempt to bring you a good set of instructions that will allow you to create beautiful and consistent software. This guide assumes that you are only targeting node.js. If your code also needs to run in the browser or other environments, please ignore some of it. Prototypal Inheritance Static Version In almost all modern programming languages we use the concept of Object Oriented Programming (OOP) to help manage the complexity of today's software. The biggest challenge in modern software is in fact managing the complexity of it. Most languages do this with a variant OOP called Classical OOP.

Let’s Make a Drawing Game with Node.js Martin Angelov By now you have probably heard of node.js. It is an asynchronous web server built ontop of Google’s V8 JavaScript engine (the same one that makes Chrome lighning fast). Using node, you can write scalable web services in JavaScript, that can handle a huge number of simultaneous connections, which makes it perfect as the backend of games, web chats and other real time tasks. The Idea Today we will be making a simple online drawing game. Brian Ford AngularJS is like the missing Batarang on your utility belt of web development awesomeness. It gives you two-way data binding that's both easy to use and fast, a powerful directive system that lets you use create reusable custom components, plus a lot more. Express is an excellent webserver for Node.js that provides routing, middleware, and sessions. Incidentally, the two work quite well together! In this tutorial, I'm going to walk through writing a simple blog app with Angular and Express.