Node-RED Flows that make flows. Executive Summary When a mummy function node and a daddy function node love each other very much, the daddy node injects a payload into the mummy node through a wire between them, and a new baby message flow is made, which comes out of mummy’s output terminal. 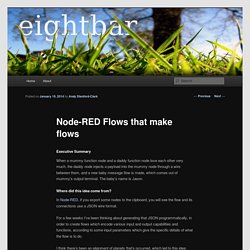 The baby’s name is Jason. Where did this idea come from? In Node-RED, if you export some nodes to the clipboard, you will see the flow and its connections use a JSON wire format. For a few weeks I’ve been thinking about generating that JSON programmatically, in order to create flows which encode various input and output capabilities and functions, according to some input parameters which give the specific details of what the flow is to do. I think there’s been an alignment of planets that’s occurred, which led to this idea: @stef_k_uk has been talking to me about deploying applications onto “slave” Raspberry Pis from a master Pi. First experiment And here’s the Node-RED flow which generates that: flow-generator And it works!!

So what? The ThingBox Project. What is the Thingbox The ThingBox allows anyone to graphically create new unlimited applications interacting with connected objects from a simple web-browser. 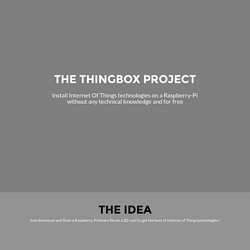 Dedicated to For non-technical people, this site provides in a single easy step a graphical interface to take fully advantage the Internet of Things. For technical people, the ThingBox is a ready to use device released under the WTFPL licence (the WTFPL is a very permissive license for software and other scientific or artistic works that offers a huge degree of freedom).

Use it to build you projects. What the Thingbox is NOT The ThingBox is not a (yet another) new home automation box. How to get a Thingbox Just download and install the ThingBox image file to a Raspberry-Pi, a tiny 35$ computer that you can buy in many shops. Why the Raspberry Pi? You need a full time running computer. Home Automation with Node Red, JeeNodes and Open Energy Monitor (Dom Bramley's Blog of Maximo and the 'Internet of Things') Jeenodes I discovered JeeNodes whilst searching for an easy and low cost way to implement a wireless arduino sensor network. The JeeNode is an open source arduino with a built-in 433 RFM12B radio. The radio is both cheaper than a Wifi shield, easier on batttery life and there are numerous of coding examples from Jeelabs and others to make them work. The RFM12B radio is relatively sophisticated with CRC checking, and acknowledgement mechanism and the ability to give Node's their own ID.

Data models for the Internet of Things : M2M Protocol Interoperability Using the Smart Object API. October 4th, 2013 The previous post in this series discussed the concept of adding an event model to RESTful APIs. 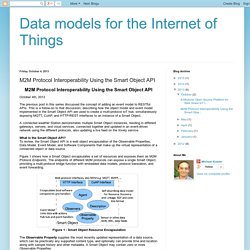 This is a follow-on to that discussion, describing how the object model and event model implemented in the Smart Object API are used to create a multi-protocol IoT hub, simultaneously exposing MQTT, CoAP, and HTTP/REST interfaces to an instance of a Smart Object. A connected weather Station demonstrates multiple Smart Object instances, residing in different gateways, servers, and cloud services, connected together and updated in an event-driven network using the different protocols, also updating a live feed on the Xively service. What is the Smart Object API? To review, the Smart Object API is a web object encapsulation of the Observable Properties, Data Model, Event Model, and Software Components that make up the virtual representation of a connected object or data source. 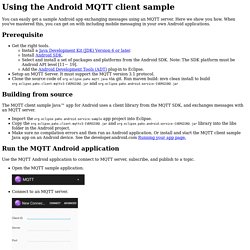 Here we show you how. When you've mastered this, you can get on with including mobile messaging in your own Android applications. Prerequisite Get the right tools. Setup an MQTT Server. Building from source The MQTT client sample Java™ app for Android uses a client library from the MQTT SDK, and exchanges messages with an MQTT server. Import the org.eclipse.paho.android.service.sample app project into Eclipse.