Why is a Java guy so excited about Node.js and JavaScript? Shouldn’t someone who worked 10+ years in the Java SE team at Sun Microsystems bleed Java bytecodes and be instantiating abstract interfaces until the last breath? 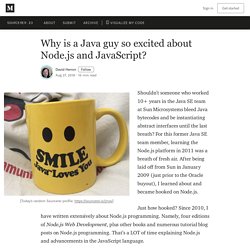 For this former Java SE team member, learning the Node.js platform in 2011 was a breath of fresh air. After being laid off from Sun in January 2009 (just prior to the Oracle buyout), I learned about and became hooked on Node.js. Just how hooked? Since 2010, I have written extensively about Node.js programming. Namely, four editions of Node.js Web Development, plus other books and numerous tutorial blog posts on Node.js programming. While working for Sun Microsystems I believed in All Things Java.

What happened to living and breathing Java byte-codes? It’s not like I’ve completely divorced myself of Java. Two years of Spring coding taught a very clear lesson: Some tools or objects are the result of a designer spending years honing and refining the thing. Spring is a popular framework for developing Java-based web applications. NW.js Documentation. NodeSchool. 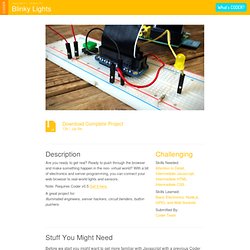 Here’s the complete list of what you need: Raspberry Pi GPIO breakout board and cable (search link) Breadboard 5 male-to-male patch wires LED (ours is yellow, but red, green, or blue are also popular) Intermittent push button 10K Ohm resistor Two 560 Ohm resistors Brain fill: a quick background on prototyping A breadboard allows you to prototype and experiment easily with electronics. When you plug a pin or wire into a breadboard, it becomes electrically connected to anything else that’s plugged into its half-row. Most breadboards also have two connection rows that run the full length of either side, usually marked with a red and blue line. The Raspberry Pi GPIO breakout board lets you quickly connect your Raspberry Pi to a breadboard, which makes it infinitely easier to experiment with simple electronics circuits. 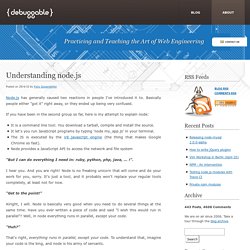 Basically people either "got it" right away, or they ended up being very confused. If you have been in the second group so far, here is my attempt to explain node: It is a command line tool. You download a tarball, compile and install the source.It let's you run JavaScript programs by typing 'node my_app.js' in your terminal.The JS is executed by the V8 javascript engine (the thing that makes Google Chrome so fast).Node provides a JavaScript API to access the network and file system "But I can do everything I need in: ruby, python, php, java, ... !

". I hear you. "Get to the point! " Alright, I will. "Huh? " That's right, everything runs in parallel, except your code. The day starts by one servant waking up the king and asking him if he needs anything. Once a servant finishes a task, he lines up outside the kings quarter to report. "That's fantastic, but could you quit the silly metaphor and speak geek to me? " Node.js frameworks review. This is a strongly-opinioned fly-by review of the evolving web framework ecosystem for Node.js. 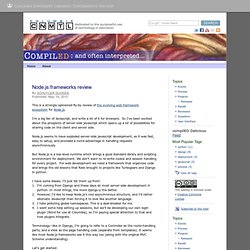 I'm a big fan of Javascript, and write a lot of it for browsers. So I've been excited about the prospects of server-side javascript which opens up a lot of possibilities for sharing code on the client and server side. Node.js seems to have exploded server-side javascript development, as it was fast, easy to setup, and provided a niche-advantage in handling requests asynchronously. Node.js Step by Step: Introduction. Node.js is an amazing new technology, but, unless you're specifically a JavaScript developer, the process of becoming acquainted with it can quickly become a bit overwhelming. 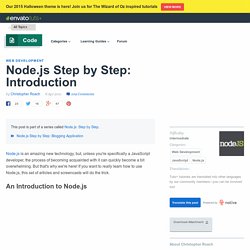 But that's why we're here! If you want to really learn how to use Node.js, this set of articles and screencasts will do the trick. Hi guys, my name is Christopher Roach, and I'll be your guide throughout this series of screencasts on Node.js. In this series we'll be using Node to create a simple blog engine, like the one made famous in the popular Ruby on Rails introductory video. The goal of this series is to give you, the viewer, a real feel for how Node works so that, even when working with any of the popular web development frameworks out there, such as Express or Getty, you'll feel comfortable enough with the inner workings of Node to be able to drop down into its source and make changes to suit your needs as necessary.