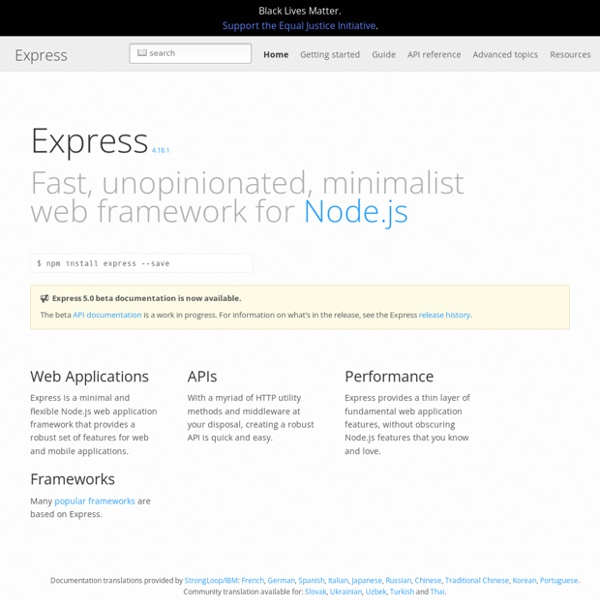 Web Applications Express is a minimal and flexible node.js web application framework, providing a robust set of features for building single and multi-page, and hybrid web applications. APIs With a myriad of HTTP utility methods and Connect middleware at your disposal, creating a robust user-friendly API is quick and easy. Performance Express provides a thin layer of features fundamental to any web application, without obscuring features that you know and love in node.js

RabbitMQ - RabbitMQ tutorial - "Hello World!" Introduction Prerequisites This tutorial assumes RabbitMQ is installed and running on localhost on standard port (5672). In case you use a different host, port or credentials, connections settings would require adjusting. Where to get help How do I read files in node.js? - docs.nodejitsu.com Reading the contents of a file into memory is a very common programming task, and, as with many other things, the Node.js core API provides methods to make this trivial. There are a variety of file system methods, all contained in the fs module. The easiest way to read the entire contents of a file is with fs.readFile, as follows:

Simple CRUD Node.js & MySQL Please Share this to your social media if this is useful for you This time I'd like to share a basic and simple example of CRUD Operation in Node.js and MySQL. Its a lil bit hard to find tutorial Node.js n MySQL as poeple tend to use Mongoose instead of MySQL. "note that there's no input validation on the Demo, just a crud example" ** UPDATE **I've created RESTFul Crud example with newest version of express and other dependencies here Before we start, Please mind the environment of this Application.

Connect - middleware framework for nodejs Connect is a middleware framework for node,shipping with over 18 bundled middleware and a rich selection of3rd-party middleware. var app = connect() .use(connect.logger('dev')) .use(connect.static('public')) .use(function(req, res){ res.end('hello world\n'); }) http.createServer(app).listen(3000); Installation: $ npm install connect Middleware: Essential Node.js patterns and snippets In this post, I take a look at the different patterns that you need to know when using Node.js. These came from my own coding and from a look at the code behind Tim Caswell’s flow control libraries. I think it is necessary to know how these basic patterns are implemented even if you use a library.. Old PDF course files inAll categories Web development12 Courses Entrepreneurship2 Courses Design1 Course

Deploying a Yeoman/Angular app to Heroku So you’ve used Yeoman to Kickstart your AngularJS app and now you’re ready to show it to the world? Well you can, by deploying it to Heroku! Prerequisites To get the most out of this tutorial we recommend you have the following skills and resources available: Develop desktop app using Node-webkit Now you can use that feature to build Desktop application like Chrome using Node.js. Node-webkit allows us to build native desktop application using Web technologies like HTML5,CSS3,JavaScript. You can install node-webkit in Linux,Windows and MacOS. A Simple Blog with CouchDB, Bogart, and Node.js Static Version Update: By request I have posted a gist of the app.js using MongoDB instead of CouchDB. This gist also serves as a beginning example for how to use non-promise-based APIs with bogart. In this article, you will learn how to use Bogart and CouchDB to create a minimal blogging engine. The Express with MongoDB article was a huge hit. This article has similar goals but shows a different way of using Node.JS.

Shining Light Productions - Win32 OpenSSL Shining Light Productions' Technical Support is highly acclaimed by many as the best in the software industry. The reason? You get to talk to the original/current developer of the product one-on-one...this means that there is no annoying third party using scripted responses. USB RFID + Python + Pub-Sub (MQTT) Now that we've got an RFID reader and pub-sub client working separately, it's time to combine the two functions to achieve the end result. The following code does exactly that. Here's how it works: