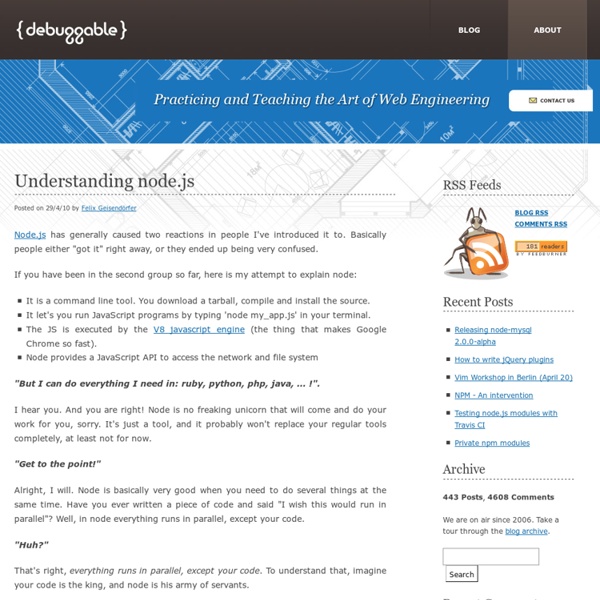 Node.js has generally caused two reactions in people I've introduced it to. Basically people either "got it" right away, or they ended up being very confused. If you have been in the second group so far, here is my attempt to explain node: It is a command line tool. You download a tarball, compile and install the source.It let's you run JavaScript programs by typing 'node my_app.js' in your terminal.The JS is executed by the V8 javascript engine (the thing that makes Google Chrome so fast).Node provides a JavaScript API to access the network and file system "But I can do everything I need in: ruby, python, php, java, ... !". I hear you. "Get to the point!" Alright, I will. "Huh?" That's right, everything runs in parallel, except your code. The day starts by one servant waking up the king and asking him if he needs anything. Once a servant finishes a task, he lines up outside the kings quarter to report. "That's fantastic, but could you quit the silly metaphor and speak geek to me?" Sure. No.

Useful Node.js Tools, Tutorials And Resources Advertisement Created by Ryan Dahl in 2009, Node.js is a relatively new technology which has gained a lot of popularity among Web developers recently. However, not everyone knows what it really is. The Node Beginner Book » A comprehensive Node.js tutorial About The aim of this document is to get you started with developing applications with Node.js, teaching you everything you need to know about "advanced" JavaScript along the way. It goes way beyond your typical "Hello World" tutorial. Status You are reading the final version of this book, i.e., updates are only done to correct errors or to reflect changes in new versions of Node.js. It was last updated on July 1, 2013.

Debugger Node.js v0.10.17 Manual Stability: 3 - Stable V8 comes with an extensive debugger which is accessible out-of-process via a simple TCP protocol. Node has a built-in client for this debugger. Diving into Node.js – Introduction & Installation Why I Need Something Like Node.js? First of all the use of some software is needed not because of itself, but because of the need of some specific functionality. In my case this was the need of real time news feed. Of course there is a way to make this without Node.js, as I’ll describe later in this post, but there are several disadvantages.

How to write your own native Node.js extension - Olivier Lalonde's blog UPDATE: There is now a Node.js addon for loading and calling dynamic libraries using pure JavaScript: node-ffi. Also, node-waf is no longer being used to compile Node.js extensions. TRANSLATIONS: This post was translated to Chinese: Introduction This is a follow up to How to roll out your own Javascript API with V8. 7 Free E-Books and Tutorials for Learning and Mastering Node.js OK, we won't bore you by telling you what Node.js is again or why it's so dang hot. You want to learn Node.js? There's no completely finished Node.js book out there that we're aware of.

Using Express.js for APIs A few tips and libraries for creating and documenting RESTful APIs with Express.js. See a simple example app that incorporates some of these ideas. Two things really got me sucked into Express when I first started using it: Jade and Stylus. I can barely tolerate writing HTML and CSS any other way. These days I spend more time using Express for APIs that send nothing but JSON.

Node.js, Doctor's Offices and Fast Food Restaurants - Understanding Event-driven Programming Are you struggling to understand “event-driven” programming? Are you having trouble wrapping your brain around “blocking” vs “non-blocking” I/O? Or are you just trying to understand what makes Node.js different and why so many people are talking about it? (and why I keep writing about it?) Node.js on Android I mainly use node.js since one year ago at work, and I really like it. On my work project, I have to create a system which uses socket.io, but I don't have enough time to re-create a system using Android Java. But I finally figure out how to run node.js on Android. * This is really advanced topic, so I don't aim for Android beginners. Just for my memo.