DIY Planet : Made in Fr 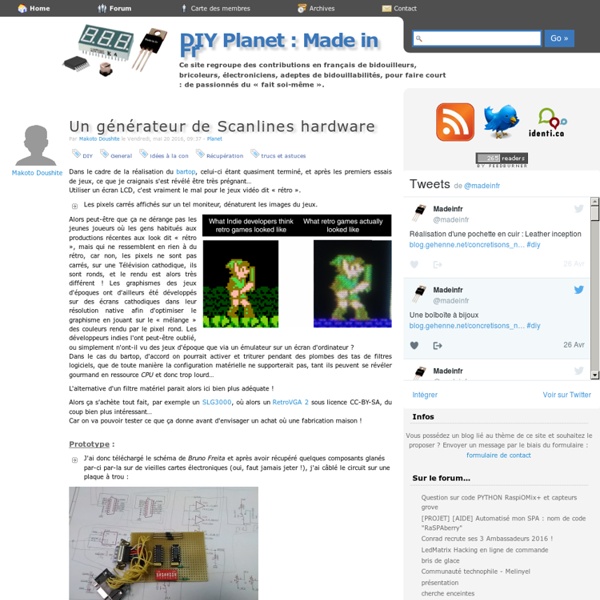 100% Homemade Lathe Although I know other people have built lathes themselves, after an enormous amount of looking on Google, I saw most homemade lathes involve casting and milling, as well as using off the shelf components like chucks and tapers. Being only a high school student, I wanted to experiment with a lathe without having to spend hundreds of dollars that I don't have. I ended up using almost all scrap materials from my basement, so there is no need to follow my materials choices. Team debuts electronic-hacking how-to videos at HOPE conference NEW YORK--Want to know how to build your own cell phone charger? How about putting an old-fashioned pay phone in your home to make voice over Internet calls? A team of do-it-yourself technology gurus are creating a video series that will show you how to hack everyday gadgets to get more--and novel--uses out of them.

arduino meets processing - PUSHBUTTON The Arduino meets Processing project intends to make it as easy as possible for anyone to explore the world of physical computing. All you need is an Arduino board as well as the Arduino and Processing software, which you can download on their project websites. On this website we explain how to: My open-source, do-it-yourself cellphone (built with Arduino). My open-source, do-it-yourself cellphone (built with Arduino). David Mellis — August 12th, 2013 For a little over a year, I’ve been working on an open-source, DIY cellphone as part of my PhD research at the MIT Media Lab. The current version of the phone is based on the Arduino GSM shield and Arduino GSM library. It sports a deliberately low-resolution screen (8 characters, each a 5×7 matrix of LEDs), a laser-cut wooden enclosure, flexure (living hinge) buttons, and a ~1000-line Arduino program that powers the user interface. The phone can make and receive phone calls and text messages, includes a phone book and caller id, and keeps the time.

Build a Food Storage Shelf Preparation Instructions: Fill all holes with wood filler and let dry. Apply additional coats of wood filler as needed. When wood filler is completely dry, sand the project in the direction of the wood grain with 120 grit sandpaper. Vacuum sanded project to remove sanding residue. Whip Grafting Grafting is one of the oldest methods of plant propagation and is standard practice today for various types of fruit trees. Whip grafting is an easy technique for the beginner, and has yielded good results for me with apples, apricots, plums and cherries. There are several other grafting techniques - bud grafting, cleft grafting, and bark grafting being some of the common ones. Python Interfacing a USB Missile Launcher I watch Woot on pretty much a daily basis and as a result I frequently end up purchasing toys that I really don't need. Most recently I picked up this silly pair of USB Missile Launchers for just under 40$ shipped: I finally found some free time yesterday to open up the package and plug them in. The hardware is coupled with a simple GUI controller written in Delphi (MissileLauncher.exe) and a USB Human Interface Device (HID) interface written in C++ (USBHID.dll). The toys lost their allure within minutes of harassing my team with a barrage of soft missile shots.

Controlling an Arduino with an iPhone Skill Level: Beginner by Pete-O | November 30, 2009 | 72 comments You can download the Source Code here. How it works: