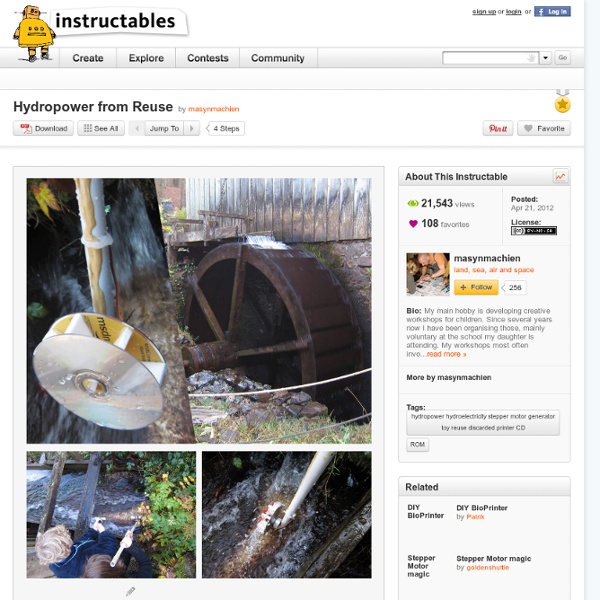 Reused: a small stepper motor as found in a printer 2 discarded CD-ROMs a foam tray some long stick (I used a piece of 20mm diameter PVC tube from demolition) a LED one or two tie-wraps a small piece of scrap paper Non-reused: The only non-reused part is the hot melt glue (I recommend the low temp type, especially when working with kids). Tools: scissors, screwdriver to disassemble the printer (not shown), cutting pliers or desoldering tools for (optional, not shown). With a bit of luck the LED can also be found in the discarded printer. To keep within the spirit, you can also reuse tie-wraps: when you cut them loose carefully near the “ratchet”, you end up with a shorter, but still usable tie wrap. Now to start building, see the next step. Related:  Energy • INDEPENDANCE, DIY ENERGIE • Energy creation

DIY VAWT In this project, we will build a small DIY VAWT, Vertical Axis Wind Turbine. We are not expecting to get much over 50 watts of production, though it would be fairly simple to double the size of the blade area to increase power. This DIY VAWT is based on the use of 4 inch PVC pipes, cut in half, for the blades. We have just started this project and have concerns with the following: start-up wind speed required - the gearing required to increase the RPMs for the treadmill motor, could prevent the wind turbine form starting, till very high wind speeds are reached gearing ratio - will a belt gearing system give us the revolutions per minute (RPM) that we need to produce usable power? UPDATE: our concern with the gearing and start-up winds speed held true. Materials: Assembly: Blades remove every other spoke in the bicycle rims. install the remaining blades. Frame I attached the blades to the bicycle rims, so the "best" bearings would hold most of the weight. Cut a piece of 2x6, 20 inches long.

8 Completely Awesome DIY Home Energy Projects | Ecoble Small-scale renewable energy is a must for a sustainable home – but converting your home to clean energy options can carry a huge initial price tag. We’ve scoured the web for some of the most innovative examples of homemade energy solutions to compile a collective list of DIY projects to make your home greener and more energy efficient without costing you a fortune. From solar water heaters and gadget chargers to homemade super-efficient refrigerators, you’ll find links (with instructions) to some of the best projects you can make at home… Homemade Energy-Save Fridge The ‘Ambient Air Fridge’ isn’t quite a year-round green appliance but when things cool down in the winter, this homemade fridge will definitely shave a few dollars off the electric bill! DIY Electric Lawn Mower A small DC motor, two 12-volt batteries, a circuit breaker, and wiring can transform your polluting, fossil-fuel dependent lawn mower into a clean, green, grass mowing machine! Make Your Own Wind Turbine DIY Hydro Power

How to make batteries out of paint This article was taken from the January 2013 issue of Wired magazine. Be the first to read Wired's articles in print before they're posted online, and get your hands on loads of additional content by subscribing online. Researchers at Rice University, Houston, have created a battery made of paint. "We've airbrushed it on to tiles, polymers, glass and steel," says grad student Neelam Singh. Here's how to harness the power of art. Assemble your paintbox Your paintable lithium-ion battery comprises five coats of paint, each representing a component of the battery: the lithium-titanium anode, two current-collectors made of a solvent, a cobalt cathode, and a polymer separator that holds the electrolyte. Layer the components The paints have to be applied in a certain order: the separator is in the centre, between the anode and cathode, and the two current collectors seal the sandwich. Seal them up tightly To seal the battery, you can use the aluminium foil found in coffee-sachet packaging.

Fabricating a Heavy-Duty Rocket Stove Rocket stoves are small efficient stoves that can produce a hot flame with only a few small pieces of wood. The reason it is called a rocket stove is because when wood is added to the fire the flames create an internal draft. As the draft is created, the fire begins to produce a jet of fire coming through the stove pipe. The stove flame eventually becomes so hot that it produces very little smoke. These stoves were created out of necessity in third world countries to cook small meals and have recently become more popular as a do-it-yourself camping stove. How I built an electricity producing wind turbine Several years ago I bought some remote property in Arizona. I am an astronomer and wanted a place to practice my hobby far away from the sky-wrecking light pollution found near cities of any real size. I found a great piece of property. The problem is, it's so remote that there is no electric service available. That's not really a problem. No electricity equals no light pollution. One thing I noticed right away about my property is that most of the time, the wind is blowing. Let me state up front that I probably won't be able to help you out much if you decide to build your own wind turbine. Since no one seems to be reading the FAQ, I will answer the No. 1 question I get many, many times a day right here up front. Update: Here is a video of the wind turbine in operation. Update: Here is a video of me assembling and setting up the wind turbine on my remote off-grid property. I started the process of designing my wind turbine by Googling for information on home-built wind turbines. .

DIY Homemade Tesla Coil Check our facebook page for updates and special offers The aim of this design was to get the highest voltage (or longest arcs) possible from a single self contained unit. Check out the new 1kW Tesla Coil! WARNING: High Voltage Device! This coil operates from 12V or 24V SLA batteries. A pipe from a hole in the top of the sphere and down the inside of the secondary coil is used to supply gas to form a type of plasma electrode. Using Butane gas and air, a blue flame can be used as an interesting discharge terminal. More Plasma Photos The output from the ignition coils is rectified (converted to DC using diodes) so that can charge the capacitor bank C1 shown b elow.

DIY non-hub builds, the why and how (part-1) Common hub motor kits have a simple construction, which keeps the price low (especially with Chinese mass-production). The low price and easy installation makes them the big seller by a wide margin. However, if you want a build which has unusually good efficiency (so a smaller battery can provide longer range), or…you want unusually good hill-climbing…a non-hub drive system just might be necessary to deliver your goals. Be aware that a non-hub system will by definition be more complex, probably more expensive, and is likely to be noisier. And…the biggest problem is that a non-hub system will be either very expensive (like the EGO, and the M-Drive), or the more affordable drives have issues with longevity and component breakage (Cyclone and GNG). Efficiency in a system design can help many aspects of your drive. As a general rule, using more volts to accomplish a specific performance goal will be more efficient than raising the amps. Adam used a Direct-Drive (DD) rear hub-motor.

Only Organics Can Feed the Hungry World: Here's Why Students working on UGA's organic demonstration farm in summer 2012. (Photo: UGA College of Ag)A new approach to agriculture that combines the best in industrial production with organic and sustainable practices is the key to meeting the changing needs of a changing world, where resources are rapidly depleted by a growing population. "Are Organic Foods Safer or Healthier Than Conventional Alternatives?" is the title of a controversial report released last week by Stanford University's Center For Health Policy. The study concludes that there is "little evidence of health benefit" from eating organic food." The press weighed in with a bewildering range of instant reactions. The LA Times, on the other hand, pointed out in an editorial that the study largely ignored the ill effects of pesticide residues on conventionally-grown produce, and the hormones and antibiotic-resistant bacteria that taint factory-farmed meat and poultry. No surprise there. Modern agriculture is here to stay.

A Rocket Stove Made From a Five Gallon Metal Bucket The principle behind a rocket stove is simple–rather than cooking on an open fire, you burn wood in an insulated chimney. Rocket stoves are highly efficient and easy to make. They run on twigs, so you can avoid cutting down a whole tree just to cook dinner. We’ve had a rocket stove made out of brick in our backyard for several years. Using a piece of 4″ vent pipe and a 90º elbow, I made the chimney. I traced the outline of the vent pipe on to the lid of the bucket and cut this hole out with a jig saw. Using the vent pipe as a guide again, I cut out a 4″ hole near the bottom of the bucket. I used one part clay (harvested from the yard) to six parts vermiculite as my insulation material. With the vent pipe in place, I packed the insulation into the bucket and let it dry for a few days before putting the lid on. I found a barbecue grill at Home Depot that rests on the top of the bucket to support a pot. The last step was to add the new Root Simple stencil to the back.

Peak Opportunities Build an Amazing Tesla CD Turbine Build a real working turbine from recycled CD's! This Tesla CD Turbine is based on the Tesla turbine, which was invented by Nikola Tesla in the early 1900's. Tesla's pumps and motors were unique in that they only used discs, and took advantage of the boundary layer effect. His smallest designs were over 100 horsepower. This Instructable is an introduction to my recently developed Tesla CD Turbine, which is made from CD's, CD spindle, pipe fittings and glue. The basic model Tesla CD Turbine shows how the boundary layer idea works to deliver power. The advanced model has many cool features, such as the use of neodymium magnets to separate the CD's with the correct gap and a Magnetic Coupler to attach implements, and much more. My next CD Turbine Instructable shows how to make a Magnetic Disc Pack and Magnetic Coupler for more advanced CD Turbine experimentation. However, please be forewarned that this turbine on air pressure is not really a kid's toy or particularly safe to operate.

free energy generating coil - zooming in on the parts …7 POINTS AGENDA ON GREEN ECONOMY FOR SUSTAINABLE DEVELOPMENT | I SEE A CHANGE Nigeria has been largely unfortunate not to have good and progressive political leaders, and this has resulted in perpetuating Nigeria in poverty and underdevelopment despite her huge GREEN ECONOMY. This persistent failure of the Nigeria System has produced a large army of bitter critics, who consistently point out the ills in the Governance of Nigeria and potter alternative ways of doing it better. Toward the Sustainable Development Conference [RIO+20] in Brazil. My 7 point agenda on green economy for sustainable development which I recommend for the President to look into will be: 1. 2. 3. 4. 5. 6. 7. The above lists are my dream for Green Economy for Sustainable Development in Nigeria. Olumide IDOWU | Developmental Consultant | AIESEC Nigeria | olumide.idowu@aiesec.net | www.olumideidowu.blog.com | +2348133451818 This entry was posted on Wednesday, June 20th, 2012 at 8:30 pm and is filed under Uncategorized.