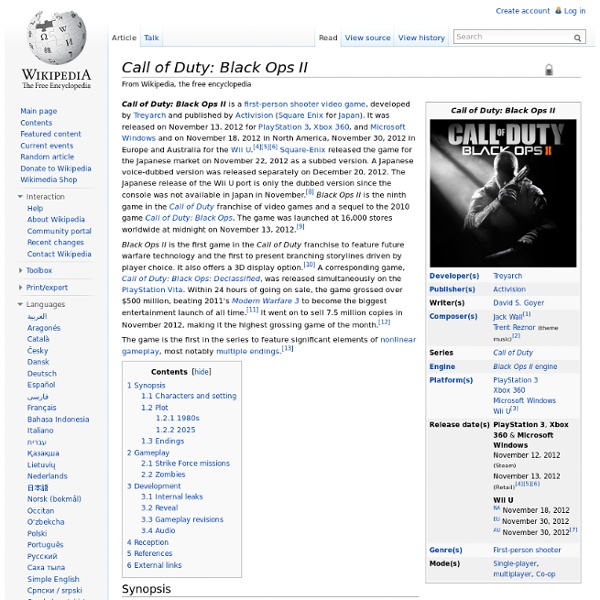 Call of Duty: Black Ops II is a 2012 first-person shooter video game, developed by Treyarch and published by Activision (Square Enix for Japan). It was released on November 13, 2012 for PlayStation 3, Xbox 360, and Microsoft Windows and on November 18, 2012 in North America, November 30, 2012 in Europe and Australia for the Wii U.[5][6][7] Square Enix released the game for the Japanese market on November 22, 2012 as a subbed version. A Japanese voice-dubbed version was released separately on December 20, 2012. The Japanese release of the Wii U port is only the dubbed version since the console was not available in Japan in November.[9] Black Ops II is the ninth game in the Call of Duty franchise of video games and a sequel to the 2010 game Call of Duty: Black Ops. The game is the first in the series to feature significant elements of nonlinear gameplay, most notably multiple endings.[16] Synopsis[edit] Characters and setting[edit] Plot[edit] 1980s[edit] 2025[edit] Endings[edit] Gameplay[edit]

Assassin's Creed III "On this land, I am torn. Part of me wants to fight and repel all outsiders. The other part of me is the outsider. ―Ratonhnhaké:ton, Assassin's Creed III Gameplay Trailer. Developer(s) Ubisoft Montreal US release 30 October 2012 (360, PS3)18 November 2012 (Wii U)20 November 2012 (PC) EU release 31 October 2012 (360, PS3)23 November 2012 (PC)30 November 2012 (Wii U) Genre: Historic Action-Adventure Game modes: Single-player, Multiplayer Platform(s): Xbox 360, PS3, PC, Wii U Media: DVD, Blu-ray Disc, Digital Download Assassin's Creed III is a 2012 sandbox style action-adventure video game that is developed by Ubisoft Montreal and published by Ubisoft. Assassin's Creed III was released on October 30 in the United States for the Xbox 360 and PS3 and 31 October in Europe and Australia, while the PC version was released on 20 November for the United States and 23 November in Europe.[1][2] The game was also released for the Wii U in North America on 18 November.[3] Development Art direction Gameplay Combat Other

Video game A video game is an electronic game that involves human interaction with a user interface to generate visual feedback on a video device. The word video in video game traditionally referred to a raster display device,[1] but it now implies any type of display device that can produce two- or three-dimensional images. The electronic systems used to play video games are known as platforms; examples of these are personal computers and video game consoles. These platforms range from large mainframe computers to small handheld devices. Specialized video games such as arcade games, while previously common, have gradually declined in use. Video games have gone on to become an art form and industry. Video games typically use additional means of providing interactivity and information to the player. History Early games used interactive electronic devices with various display formats. Other early examples include: Overview Platforms Genres Classifications Casual games Main article: Casual game Serious games

The Pros and Cons of Technology Implementation in Schools - ZamboTimes It is hard to deny the impact of modern technology in our lives. Technology has made things happen which we would have thought to be not possible decades ago. Technology has made life far more convenient for many of us. Probably one of the most well known benefit of technology at school is that it provides a great wealth of knowledge to the students. Computers help students to learn through exploration. But the presence of modern technology in our educational system is not without its disadvantages. Social economic status may also prevent some students to enjoy the benefits of technology that is offered at school. So the implementation of technology in the educational system has its ups and downs. Published At: Isnare.com Free Articles Directory - Link:

Why is Technology So Important Today? Have you asked yourself why technology is so important today? Just look around and you'll know why. Literally, at every instant of time, you are surrounded by technology. Whether you are working or resting, you are always using technology. Places far away have come closer, thanks to technology. Why is Technology Important? The World Lit Up! The discovery of electricity drove all the darkness away and the world lit up. Basic Needs... How would our basic needs be met so easily if not for technology? ...and More How does water reach homes? Businesses Grew Businesses, small and big, need technology to thrive. Communicating Became Easier! Technology has changed the way people communicate. Satellite and radio communication have changed the entertainment industry. Learning Became Interesting The role of computers and Internet in education cannot be ignored. Technology Boosted Scientific Research! Technology is as important in the healthcare industry as in any other.

Halo 4 Development of Halo 4 began in 2009 and continued until September 2012. The game was officially announced on June 6, 2011, at the 2011 Electronic Entertainment Expo (E3). The game has been supported post-launch with bug fixes, updates, and downloadable content. Halo 4 grossed US$220 million on its launch day and $300 million in its opening week, a record for the franchise. Gameplay[edit] Modes[edit] Other game features include Forge, a map-editing tool first introduced in Halo 3. Synopsis[edit] Setting and characters[edit] Campaign[edit] Four years after the events of Halo 3, Forward Unto Dawn drifts towards Requiem from the destroyed ring.[26] Cortana wakes Master Chief from cryonic sleep shortly before rogue Covenant forces board the vessel.[27][28] The remnants of Forward Unto Dawn are caught in Requiem's gravity well and pass through an opening to crash-land on its interior. Chief makes contact with Infinity and helps repel the Didact's attack. Spartan Ops[edit] Development[edit]

Pros and Cons of Technology Technology at work is both a blessing and a curse - so to speak. Technology has improved performance at work with faster communication via email, video conferencing, the telephone etc. As a teacher, I can post grades that are available immediately for parents to view, track student performance on State testing and look up ideas for lesson plans using technology. The flip side of this issue are people who abuse their access to the technology on their job, such as constant instant messaging, emailing friends, and then the individuals who view inappropriate information on the web. Transactions for trillions of dollars can be made with the stroke of a key using technology. Employees sometimes have no privacy, for example, when we provide information about ourselves on the web then it's public knowledge. Again, the flip side is that I can access information about situations and people at any time.

Social and Cultural Foundations of American Education/Technology/Pros and Cons What are the pros and cons of technology in the classroom? Imagine it is your daughter’s first day of work after her high school graduation. She is working at a local company doing secretarial work to pay her way through college. Her new boss comes in and asks her to type the agenda for tomorrow’s meeting and email it to the staff by noon. When her boss walks away she just sits there wondering how she is going to complete this task in ample amount of time because she has no idea how to use the computer. Is it her fault that she did not learn how to use the computer? This is the reality of many high school graduates. What is technology integration in the classroom? Many people ask the question: What is technology integration and how is it possible? Pros of Technology[edit] There are numerous benefits for the use of technology in all curricula in today’s education. The use of the computers can break up the monotony of lecture and note taking in the classroom. Cons of Technology[edit] A. B.

The Pros and Cons of New Technology | Computers | Tech The Advantages of New Technology in Your Business Reduced Waste will lead to lower costs. Today, the amount of waste produced by technology can be the difference between strict environmental regulations and closure (but of course, also profitability). Increased Productivity where properly assessed, increased production, through efficiency and better planning, can also result from the introduction of new technology. Less Workforce may be needed if jobs that previously required personnel can now be automated, further reducing costs. Higher Profits due to the increased efficiency which produces less costs. A Higher Income can be yours if your business is making more profit. Advanced Communications such as the use of e-mail, computer networks and mobile phones allow information to be sent/received instantly. More Competitive as you can afford to lower the price of your product/service if your profit levels increase, without lowering your standards. The Disadvantages of New Technology in Your Business

Pros and Cons of Using Technology - Arguments Against the Importance of Technology | Use of Technology Pros and Cons of Using Technology - Arguments Against the Importance of Technology On a daily basis, both businesses and individuals use technology. We cannot deny, technology has become part of our lives, at least every one of us has to use it, either for communication, education, health purposes, job creation, travel or business growth. Lets take a simple look at communication. As humans, it is natural that we communicate. But now each of us uses technology to communicate to our friends, business associates, consumers and loved ones. (1) . Increased Production: - Pro: Today businesses who have embraced technology have gained a competitive advantage in the market, technology can improve efficiency. - Cons: The use of automated systems in a bakery will mean that manual labor will be cut down which is a benefit to the business owner. Increases ROI ( Return On Investment): -Pro: Technology will help a business to expand and increase its production. (3) . Popular search terms: