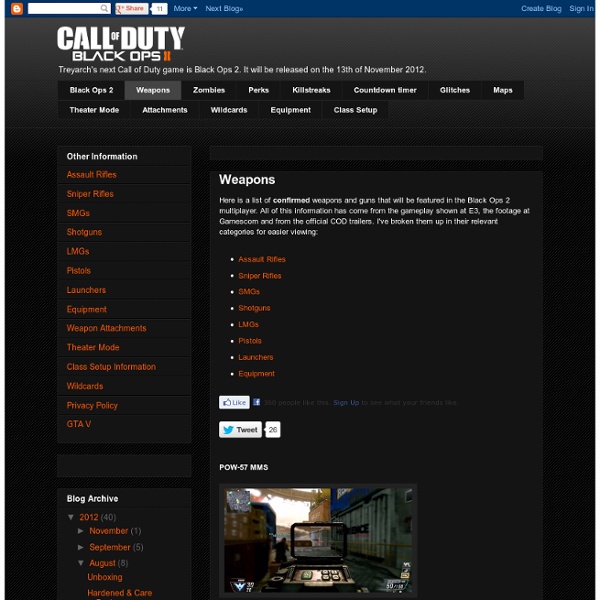 Here is a list of confirmed weapons and guns that will be featured in the Black Ops 2 multiplayer. All of this information has come from the gameplay shown at E3, the footage at Gamescom and from the official COD trailers. I've broken them up in their relevant categories for easier viewing: I did some searching about and couldn't find anything relating to the POW-57. Judging by how fast the player can run with it; and it's smallish size, I think it's safe to assume that it will be an SMG. Also note that it's an automatic that can be equipped with a futuristic red dot sight. LSAT w/ Hybrid Optic Sight Not only do we know that the LSAT will be returning; will also know that the Hybrid scope is back. Chicom CQB The Chicom CQB was another weapon that appeared in the single player footage. This is a lock-on anti-air gun that can be used to take down enemy killstreaks. The AN-94 will be an automatic Assault Rifle in Black Ops 2. Assault / Riot Shield Oh and guess what? Raging Judge Combat Knife

Battlefield 3 Open Beta Start Times THE BUZZ: The start times for the Battlefield 3 open beta, for all territories, has been revealed. It begins today, September 29th, on all platforms. Medal of Honor owners and Origin pre-0rderers have been enjoying the beta for the last two days, and now the rest of the world gets to join in. The start times are as follows: US Pacific time: 6 AM – 8 AMUS Eastern time: 9 AM – 11 AMEurope: 3 PM – 5 PMAustralia (AEST): 11 PM – 12 PMJapan: 10 PM -12 PM JST These launch times are not final and their may be delays for various reasons. EGM’s TAKE: Today is the day, clear your schedules and prepare for war. Will you be playing the beta today?

Weapon Camouflage - Call of Duty: Black Ops 2 Wiki Guide Hold up, buddy. To edit this page, you'll need a username. (It's free and only takes a sec.) Weapon Camouflages (shortened to Camo) in Black Ops II are unlocked by completing challenges. Regular Camo DEVGRU A-TACS AU ERDL Siberia Choco Blue Tiger Bloodshot Ghostex: Delta 6 Kryptek: Typhon Carbon Fiber Cherry Blossom Art of War Ronin Skulls Gold Gold Camo To get the Gold Camo you have to get the other camos for the same gun. Elite Camo If you are a member of Call of Duty Elite, you will get a special Elite Camouflage for your weapons. CE Digital The CE (Collector's Edition) Digital Camo is a special Camouflage available in Special Editions of Black Ops II. Diamond Camo The secret Diamond Camouflage is a type of Weapon Camouflage that you can unlock for any weapon. To unlock the Diamond Camo you must unlock all Weapon Camouflage for each gun of that specific weapon type. What Links Here Weapons and Equipment | Weapon Camo | Special Edition Camouflage | Camo | Camouflage

Perks - Call of Duty: Black Ops 2 II | BO2 - Perks List Black Ops 2 II - Perks List Black Ops 2 multiplayer perks give you a variety of different enhancements, thus enabling you to customize your classes even further. Unlike in previous Call of Duty games, you can choose a total of 6 perks, but this limits the amount of customization you can do for your class. You can also opt-out and choose no perks from the Black Ops 2 perks list, and instead focus more on equipment and weapon attachments. By default you can choose 3 perks for your class, one from each slot - with Wildcards you can choose one extra perk per slot for a total of 6 perks. Perks in BO2 don't affect your weapons stats; instead you'll have to use attachments to achieve, for example, better accuracy or deeper bullet penetration. There are no Pro Perks in Black Ops II multiplayer. Perk Slot 1 Lightweight Allows you to move faster than normal. Flak Jacket Blind Eye AI-controlled air support Scorestreaks can't detect you. Hardline Ghost Perk Slot 2 Hard Wired Scavenger Cold Blooded Fast Hands

Call Of Duty Black Ops 2 Secondary Weapons List ( BO2 ) In this guide I am going to list the secondary weapons that you will see in Black Ops 2.. I guess it will be a shorter guide but I will go over the pistols and launchers of Black Ops 2. OR if you want to stay on top of all of my Call Of Duty Black Ops 2 guides feel free to follow me on Twitter @Johnrr631992 , or Twitter.com/Johnrr631992 . I will be posting guides for online play, multiplayer game types, set ups for each game mode, zombie guides, campaign guides, info guides, and anything that you need to know going into Call of Duty Black Ops 2. Before I get started, let me say, please feel free to ask questions below in the comments section.. Also you can ask question on my Gamer Tag on Xbox Live IF need be.. ALSO!!!

Call of Duty: Black Ops 2 II | BO2 - Scorestreaks / Killstreak Rewards Black Ops 2 II - Scorestreaks / Killstreak Rewards In Black Ops 2 multiplayer Killstreaks have been replaced with Scorestreaks, which are earned by killing enemies, assisting teammates and completing different objectives. For example, a normal kill gets you 100 points, but capturing a flag gives you 200 points - you will also get points when your teammates kill enemies while your UAV is active. The UAV, for example, can be called in at 350 points, but you will need 1600 points to call in the powerful VTOL Warship. You can equip a maximum of 3 Scorestreak rewards at the same time. Your Scorestreak resets to zero once you die. UAV - 350 Points Shows enemies on the radar as red dots for 30 seconds. RC-XD - 450 Points Allows you to remote control a small car that's packed with explosives. Hunter Killer - 525 Points Deploys a flying drone that seeks out and tries to destroy the nearest enemy player or vehicle. Care Package - 550 Points Counter-UAV - 600 Points Guardian - 650 Points AGR - 1000 Points

Call of Duty: Black Ops 2 'Zombies' terrorize an open world, 8-player 'Grief' mode introduced by Xav de Matos on Sep 26th 2012 1:00PM Treyarch's bonus zombie mode was meant as a special, throwaway time destroyer when it was injected into Call of Duty: World at War. "It's born out of the passion of the team," Treyarch boss Mark Lamia says at a recent preview event showcasing more multiplayer content and teasing the co-operative zombie killing mode. Though its popularity has grown with each Call of Duty release tasked to Treyarch – the team behind this fall's Call of Duty: Black Ops 2 – the developer has never attempted to attach a fiction to the mode. "The story is kind of crowd-sourced. With its most aggressive fans busy thrusting themselves into the role of fan fiction auteur, Treyarch continues to expand the zombie play space. Zombie ModesTreyarch revealed three modes during its preview event, detailing them in a presentation at the end of a day of multiplayer hands-on. How the Multiplayer Engine Changes Things