Weapons. Here is a list of confirmed weapons and guns that will be featured in the Black Ops 2 multiplayer. 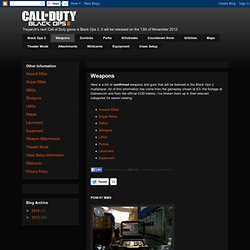 All of this information has come from the gameplay shown at E3, the footage at Gamescom and from the official COD trailers. I've broken them up in their relevant categories for easier viewing: I did some searching about and couldn't find anything relating to the POW-57. Judging by how fast the player can run with it; and it's smallish size, I think it's safe to assume that it will be an SMG. Also note that it's an automatic that can be equipped with a futuristic red dot sight. LSAT w/ Hybrid Optic Sight Not only do we know that the LSAT will be returning; will also know that the Hybrid scope is back. Chicom CQB The Chicom CQB was another weapon that appeared in the single player footage. This is a lock-on anti-air gun that can be used to take down enemy killstreaks. The AN-94 will be an automatic Assault Rifle in Black Ops 2. Assault / Riot Shield Oh and guess what? Raging Judge Combat Knife. 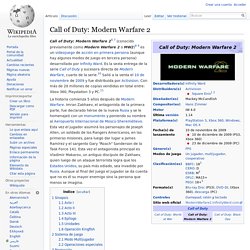 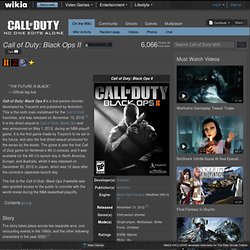 Story The story takes place across two separate arcs, one recounting events in the 1980s, and the other following characters in the year 2025.[4] Plot According to Woods, by 1986 Alex Mason had effectively retired from active duty to pursue an obscure existence in Alaska with his son, the seven-year-old David. In light of this information, Mason and Hudson begin tracking Menendez, who has established himself as a primary arms dealer for bush conflicts in Southern Africa and Latin America. Faking his demise with the assistance of Panamanian dictator Manuel Noriega, Menendez lives to retaliate against those he holds personally responsible for his sister's death. Three decades later, Menendez re-emerges as the leader of Cordis Die, a massive populist movement with over a billion followers. 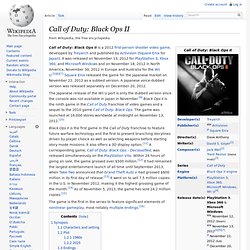 It was released on November 13, 2012 for PlayStation 3, Xbox 360, and Microsoft Windows and on November 18, 2012 in North America, November 30, 2012 in Europe and Australia for the Wii U.[5][6][7] Square Enix released the game for the Japanese market on November 22, 2012 as a subbed version. A Japanese voice-dubbed version was released separately on December 20, 2012. The Japanese release of the Wii U port is only the dubbed version since the console was not available in Japan in November.[9] Black Ops II is the ninth game in the Call of Duty franchise of video games and a sequel to the 2010 game Call of Duty: Black Ops. The game was launched at 16,000 stores worldwide at midnight on November 13, 2012.[10] The game is the first in the series to feature significant elements of nonlinear gameplay, most notably multiple endings.[16]

Call of Duty: Advanced Warfare - GameSpot. Modern Warfare 2 - Call of Duty 6: Modern Warfare 2 (MW2) Source - Advanced Warfare. A collection of what we know about BF4! - PC & Mac Discussion. Pre.S.: Ive read my post and its a bit redundant so bear with me , lol This remake of BF3 named BF4, reminds me of the UT2003 fiasco, even though it was a good game, Epic always meant it to be UT2004. 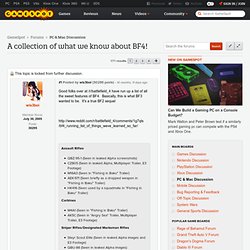 Im guessing that the lack of funds and/or publishers, ceo, whoever... in need of cashflow pressed so they released ut2k3, in order to make 2k4 possible. Now the story repeats itself with BF, as most people are noticing a lot of things are left untouched from bf3 into bf4, meaning, they are just adding the missing features that were planned from the start. Another idea that comes to mind is: They wanted BF4 to be the king, and in order to make that happen, they needed to half bake bf3 so that bf4 could come and triumph over it. Both ideas follow the same principle but for different reasons. Im excited for BF4 and most likely buy it.