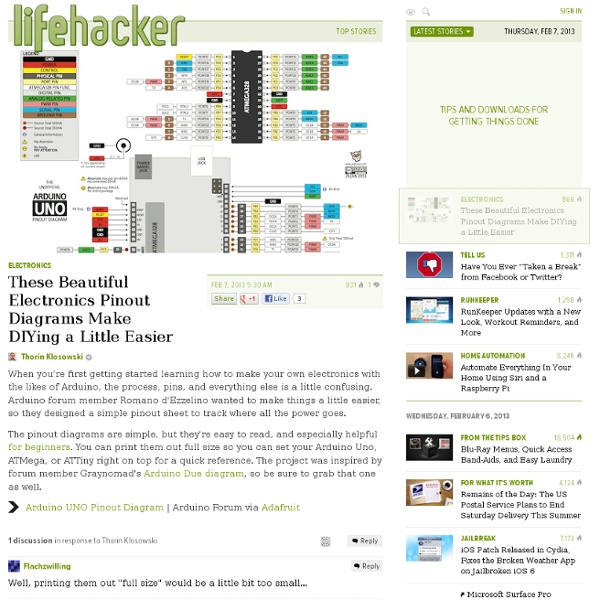 Beginners Guide Beginners Guide to Electronics by Martin T. Pickering Last updated on November 23, 2008 This book gives simplified explanations of how some electronic components work in a circuit. I first became interested in electronics when I was age 10 (as long ago as 1961). ©2008 Martin T. What's the Difference between A.C. and D.C.? How does a Resistor Work? All the colours for 5% tolerance resistors: How do Diodes Work? How do Transistors Work? Abbreviations Although we use the Greek symbol Omega W to represent “Ohms” it is frequently written as “R”. How does a Capacitor Work? What does a capacitor look like? How do Inductors Work? The Relay Bread Board and building a LED Flasher Building the LED Flasher Astable Multivibrator using two transistors

Drive a webpage in real-time using Arduino, SensorMonkey and Processing.js Remote visualization of real-time sensor data. This tutorial describes in detail how to use the free SensorMonkey service to push real-time sensor data from an Arduino to a webpage for visualization using Processing.js. No server-side coding or Ethernet shield is required. A standard, run of the mill Arduino will work perfectly. You'll also need a sensor to sample some values. After configuring the Arduino to sample sensor values, I use SensorMonkey to publish the data live over the Internet in real-time (Disclosure: I co-founded the company developing SensorMonkey). UPDATE 26-06-2012: Non-Windows Users As an alternative to Bloom for non-Windows users, I have uploaded a Processing sketch, named SensorMonkeySerialNet, to our GitHub account.

(Rethinking) Makerspaces Kids have always made in my library. We encouraged digital and visual and dramatic and rhetorical creativity before, during, and after school. But for a while, I’ve questioned the value of using already heavily used real estate to randomly carve out space for a 3D printer, electronics stations and sewing machines. I had my doubts about the makerspace movement in school libraries. A couple of weeks ago I had the opportunity to chat with Amos Blanton, project manager of the Scratch online community, and a member of the Lifelong Kindergarten Group at MIT Media Lab. Amos makes the case for makerspaces as powerful, authentic, relevant learning experiences, and for when and why library may be the very right space to create a makerspace. Here’s the video of our chat and a few of key points to consider before adopting a maker culture for libraries Amos’ key points: School pressures make it challenging to make space for interest-driven learning.

Arduino Tutorial - Lesson 5 We've done a lot so far, blinking lights, printing messages...all of that stuff is output: signals coming from the Arduino. The next step is to start playing with input, with the Arduino responding to outside events. In this lesson we will begin with the most basic kind of input, a push-button switch! You're probably familiar with switches, there's tons of them in your house. On the left, the switch is open and no current flows. (thanks wikipedia!) In this photo, you can see the internals of a light switch. Light switches are great but we need something smaller. These little switches are a 1/4" on each side, cost about 25 cents, and can plug directly into a breadboard. Normally, the two wires are disconnected (normally open) but when you press the little button on top, they are mechanically connected. To get the buttons to sit better in the protoshield, you may want to straighten out the legs (just squish them with a pair of pliers) so that they look like the button on the left. Fig 5.2

PIR Motion Sensor PIR sensors allow you to sense motion, almost always used to detect whether a human has moved in or out of the sensors range. They are small, inexpensive, low-power, easy to use and don't wear out. For that reason they are commonly found in appliances and gadgets used in homes or businesses. PIRs are basically made of a pyroelectric sensor (which you can see above as the round metal can with a rectangular crystal in the center), which can detect levels of infrared radiation. Along with the pyroelectic sensor is a bunch of supporting circuitry, resistors and capacitors. Our older PIRs looked like this: Our new PIRs have more adjustable settings and have a header installed in the 3-pin ground/out/power pads For many basic projects or products that need to detect when a person has left or entered the area, or has approached, PIR sensors are great. These stats are for the PIR sensor in the Adafruit shop which is very much like the Parallax one . More links!

MaKey MaKey | Buy Direct (Official Site) BeagleBoard.org - default Ovidiu Predescu's Weblog: Arduino Tiny Web Server - part 3 Update (September 3rd, 2011): The code is on Github: A zip file of the latest version of Arduino TinyWebServer can be found here What is it? Arduino TinyWebServer is a library implementation of a small web server running on an Arduino Duemilanove or Uno using the new Ethernet Shield released at the end of September 2010. The library is meant to provide a Web interface to your Arduino project. To save precious memory space on your Arduino, TinyWebServer encourages you to develop your web applications as AJAX applications. Changes from the previous release As you're probably aware, a new Ethernet Shield for Arduino was released at the end September 2010. I finally had some time to update the Arduino TinyWebServer library to make it work with the new shield. Compared to the previous release, the new Arduino TinyWebServer release removes the dependency on the EthernetDHCP library. Documentation

Hobby Engineering Home Page Getting Data From The Web – Arduino + Ethernet Yesterday we covered how you would go about controlling pins of your arduino over the internet using the Arduino Ethernet Shield set up as a server. Today we are going to take a look at using the shield as a client to get information off of a web page, and report back. I used this method a few months ago when I made the Nixie Twitter follower counter dubbed Twixie. The ethernet shield can be used to access any non-password protected site with ease, but getting the information back to you is the hard part. For Twixie I created a special php page that queried the twitter API and displayed only the twitter count. This made it so I didn’t have to tell the arduino what to look for, or scour endless lines of HTML looking for a single number. In the client mode, the ethernet shield is able to access a webpage and return what is read. Because of this, we need a way to tell the arduino what is junk, and what is the good stuff. Code The example php file. <?

Blog Archive » The greatest electronics book ever written? Getting Started in Electronics , by Forrest M. Mims, III. is a spectacular introduction to the world of electronics. The entire book is formatted like an engineering notebook with handwritten notes on every page. My father gave me this book when I was six or seven years old along with a 25 watt soldering iron from Radio Shack. Forrest Mims himself is an interesting individual and has led a prolific career as a writer and amateur scientist. The book even includes a handy guide to help you learn How to Solder! Thankfully, it turns out that this fantastic book is still in print . In my opinion, this is probably the greatest introductory book about electronics ever written. Happy 25th, Getting Started in Electronics! Like this: Like Loading... Tags: books, Books and Resources, Electronics, Forrest Mims, Radio Shack