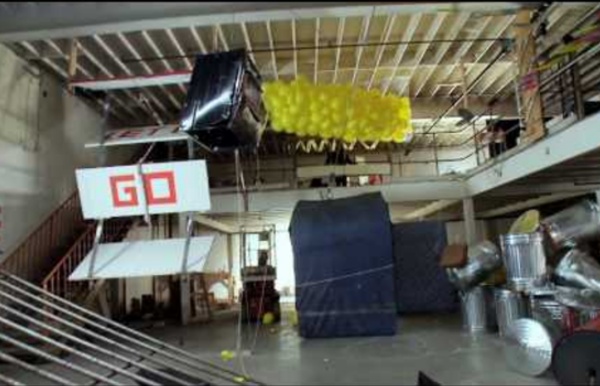 Photographer Tracks Down People He Shot in the Street 40 Years Ago to Recreate Their Pictures Back in the 1970s and 1980s, paramedic and part time photographer Chris Porsz spent all of his free time walking around the streets of Peterborough, England, taking photos of passersby. 40 years later, Chris tracked down the subjects of his photos all of those years ago, convincing them to strike the same pose for a “then” and “now” perspective. According to Chris, “I don’t think anyone else has tracked down so many strangers and recreated photos in this way before.” It took “tenacious detective work, meticulous planning and, often, unbelievable coincidences,” but the results are a fascinating look at how people have changed - or not changed -as the case may be.

Kids project... Marble drop mine shaft Kids project... Marble drop mine shaft Toilet paper and paper towel tubes Ice cream sticks (you can buy these at craft and hobby shops) Glue gun or sticky glue dots Cardboard Tray for base The idea behind this project is that there is no wrong or right way to make your marble slid - start building and see what you end up with! It is best to start building the project from the bottom and work your way to the top. 1.

Kinds of Energy NOTE: If you want to learn about Energy in terms of Renewable and Non-renewable Energy, please select an option below: What is energy? Look around you. Is anything moving? Can you hear, see or feel anything? Sure... this is because something is making something happen, and most probably, there is some power at work. Scientists Create Functioning Whole Organ From Cells For the first time, researchers have been able to develop a functional thymus by using reprogrammed lab-created cells. The research was led by Clare Blackburn MRC Centre for Regenerative Medicine at the University of Edinburgh and the paper was published in the journal Nature Cell Biology. The thymus is the organ responsible for the maturation of T cells, which are essential to a functional immune system. Disease and aging can compromise the thymus, though some birth defects like DiGeorge syndrome will fail to fully form the organ at all. While thymus transplants or immune cell infusions can be given for these patients, organ availability and complications with tissue matching do not make it a smooth alternative.

Hajime Narukawa Wins Good Design Grand Award for World-Changing Map The Good Design Grand Award, arguably Japan’s most prestigious award for design, just went out to architect Hajime Narukawa’s completely groundbreaking design for a map of the world. His map, the AuthaGraph World Map, isn’t your average map of the globe: It’s a near-perfect representation of the continents and oceans as they exist on our spherical planet, all laid out on a two-dimensional surface. Maps are pretty darn complicated. We take it for granted that Antarctica is going to be smushed down at the bottom of the map and not shown in full; all the oceans are radically disfigured, but we’re used to seeing them that way. That style dates back to cartographer Gerardus Mercator’s paradigm-shifting map from 1569.

This Crazy New Instrument Uses 2000 Marbles To Make Music Ever looked at a marble and thought “Hey, I could make music with those things!” No? Well, me neither, but Martin Molin of Swedish band Wintergatan did, and we’re seriously glad about that, because what he’s invented is nothing short of genius. Taking two years to complete, The fantastically complex Wintergatan Marble Machine is comprised of 3000 internal parts and uses 2000 marbles to make music. Mechanics of Wind-up Cell Phone Chargers " ­So what's going on inside a wind-up cell phone charger? How does the simple turning of a crank lead to extra juice for your phone's battery? To understand the basics of wind-up cell phone chargers, it helps to look at a much bigger, yet surprisingly similar, technology -- wind turbines and wind power. When we use massive fans to generate electric power, we're relying on the motion of wind. In the simplest terms, the blades of the fans capture kinetic energy, or the energy of motion, from the movement of the wind.

Knitting Needle Sizing Conventions How to make sense of Knitting Needle sizes on international and vintage patterns. One of the exciting aspects about looking at knitting patterns on the Internet is that there is access to a massive wide range of different patterns and designs. Not only are these designs and patterns written by designers from around the world, but also there are patterns available on the Internet which were written many years ago, giving a wealth of choice for todayâ€™s knitter.

Danny MacAskill – new video Danny MacAskill's Wee Day Out is here! Danny MacAskill became one of the biggest YouTube stars in the world after his incredible bike skills were witnessed in a number of jaw-dropping edits, including Imaginate, Epecuén and Way Back Home. Now the Scottish trials legend is back – this time on a mountain bike – with his brand new film, Wee Day Out. WEE DAY OUT EXPLAINED: Find out why Danny says "There was nothing funny about this film" Danny explores the rural landscape around Edinburgh in a film that sets out to capture the simple fun of a ride in the country. Teachers Are Terrific!: What's Going on in the Lab? Newton's Laws of Motion! We recently had a theme week with each grade level! Each explored a Law of Motion after reviewing all three. It was a fabulous week of STEM challenges and learning all about Newton (not related to Cam!) So, this is what we have been up to in our science class! Take a look!

Mapping Renewable Electricity Generation The use of renewable energy sources (hydro, solar, wind, geothermal, and biomass) for electricity generation varies profoundly from country to country, ranging from 100 percent in Albania, Iceland, Paraguay, and Tajikistan to less than 1 percent in Belarus, Eritrea, and Jordan. Intriguingly, the map bears no resemblance to that of economic development; the highest levels of “renewability” are found in some of the world’s richest countries (Norway) and some of the poorest (DR Congo). Low levels are also found across the developmental spectrum. As can be seen in the relatively comprehensive and only slightly out-of-date data-table in Wikipedia from which the map was generated, the vast majority of renewable energy worldwide comes from hydropower.

Sock Pattern Generator toe-up sock pattern generator Use this tool for a custom toe-up sock pattern using a short row heel and toe. NOTE: Before beginning, knit and measure your gauge swatch in stockinette. Be sure you're happy with the fabric. For best fit, socks should be knit quite densely compared to a sweater or scarf. Select a gauge, needle, and shoe size from the boxes below and click "Make My Pattern!".