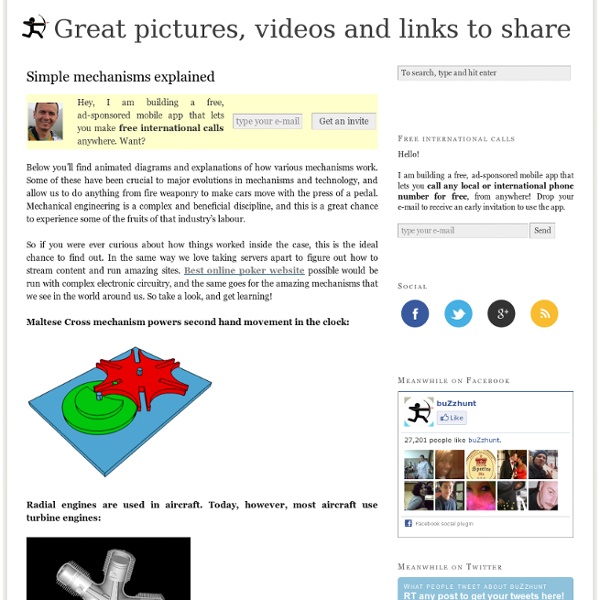 Email Below you’ll find animated diagrams and explanations of how various mechanisms work. Some of these have been crucial to major evolutions in mechanisms and technology, and allow us to do anything from fire weaponry to make cars move with the press of a pedal. Maltese Cross mechanism powers second hand movement in the clock: Radial engines are used in aircraft. Reciprocating movements power steam engines in locomotives: Sewing machine: Manual transmission mechanism, also known as “stick shift” is used to change gears in vehicles: This mechanism is called constant-velocity joint and is used in front-wheel drive vehicles: Torpedo-boat destroyer system is used to destroy fleet in naval military operations: The Wankel engine is a type of internal combustion engine which uses a rotary design to convert pressure into a rotating motion instead of using reciprocating pistons: + Bonus – mechanism you can watch forever Leave your comment: You may also like these posts:

MIT Designs Ultra-Efficient, Flying Fishlike Planes The next major replacements for the Boeing 737 and 777 models might not come from Boeing at all. MIT researchers recently presented NASA with two models for efficient, low emissions planes--part of a $2.1 million research contract awarded to the university by NASA in 2008. MIT's objective: design quiet subsonic planes that emit 70% less NOx, burn 70% less fuel than current models, and have the ability to take off from short runways. In true MIT style, the university delivered--albeit with designs that completely reimagine the traditional aircraft silhouette. Two models emerged from MIT's research--The 180-passenger D "double bubble" series, intended to replace the Boeing 737, and the 350 passenger H "hybrid wing body" series, a replacement for the Boeing 777. The engineers conceived of the D series by reconfiguring the tube-and-wing structure. The D series plane travels 10% slower than a 737 to reduce drag and cut down on engine stress.

Solar sails pick up speed 3 hrs ago | Fiji Times Club holds annual safeguard ritual Commodore Mark Hirst salutes while Rear Commander Patricia Punja looks on during the Royal Suva Yacht Club's sail past in the Suva Harbour yesterday. Trending on the Topix Network 8 hrs ago | The Lebanon Daily News Individual journey of faith isn't only one of smooth sailing I was born into a family descended from Mormon pioneers. 12 hrs ago | CNN Grieving when there's no body Seven years after it happened, Donna Carnes can finally sleep through the night, except when a similar trauma occurs, like the missing Malaysia Airlines plane. 16 hrs ago | The New Zealand Herald San Diego on short list to host next America's Cup San Diego has made the short list of venues being considered to host the 35th America's Cup in 2017, port commission chairman Bob Nelson said Friday. 20 hrs ago | Hillingdon Times Ocean drama sailor back on dry land Fri Apr 11, 2014 CBS Atlanta Paul Gauguin Cruises Presents Its Voyages By Gauguin 2015 Collection Brochure Patch.com

China's '3D Fast Bus' Straddles the Road So Cars Can Drive Under Photos: Chinanews Too Expensive to Go Under? Go Over... What if there was a way to get most of the benefits of a subway, but without the costs of digging up all those tunnels? The presenter in this video is Song Youzhou, chairman of Shenzhen Hashi Future Parking Equipment Co., the company that is proposing the 3D Fast Bus. What you can see from the video is traffic jams, what you can hear is noise, and there is also invisible air pollution. Compromise Between BRT and Subway It's certainly a very interesting idea. Via Chinahush, Engadget

Metaphilm ::: Donnie Darko A new theory to help the viewer unravel the cult classic. Erik A. Coburn n recent years, Donnie Darko, directed by Richard Kelly, has become a cult classic. While most people who watch this twisted film will love it, few will understand the intricate, multi-layered timeline residing within. Explaining the timeline This diagram summarizes Donnie’s travel, to and from the Tangent Universe, to and from the past and the future. The entire movie occurs between points B and C on the timeline, aside from the last five or ten minutes, which happen at point A. Before getting into the explanations, there are some phrases that need to be defined: With these terms in mind, we can now begin breaking down the timeline. At point A, the Tangent Universe appears. He’s been here before Take a deep breath, now. Now what does this mean? What is Frank’s story? Frank is not a supernatural being. But, if Donnie is saved by Frank at the beginning, what about his first trip through the Tangent Universe? Wake Up

The brick-road-laying Tiger Stone Laying down paving bricks is back-breaking, time-consuming work... or at least, it is if you do it the usual way. Henk van Kuijk, director of Dutch industrial company Vanku, evidently decided that squatting/kneeling and shoving the bricks into place on the ground was just a little too slow, so he invented the Tiger Stone paving machine. The road-wide device is fed loose bricks, and lays them out onto the road as it slowly moves along. A quick going-over with a tamper, and you’ve got an instant brick road. View all One to three human operators stand on the platform of the Tiger Stone, and move loose bricks by hand from its hopper to its sloping “pusher” slot – the bricks do have to be fed into the pusher in the desired finished pattern. The tread-tracked machine is electrically-powered, and has few moving parts, so noise and maintenance are kept to a minimum. Via Gizmodo. About the Author Post a CommentRelated Articles Just enter your friends and your email address into the form below

Lies Men Tell Themselves in Order to Stay in Abusive Relationships by Dr Tara J. Palmatier, PsyD 1. I’m strong. Furthermore, you can’t take it, at least not without long-term, pervasive damage to yourself, your psyche and your body. Yes, you’re strong and that’s an incredible, well. . . strength. 2. Seeing the daily minutiae, the venomous attacks, the disconnection to reality, and the disproportionate reactions to minor absurdities in black and white can be a real eye opener. Bottom line: You may as well do what’s good for you and, in the long run, for your kid(s) (if applicable). 4. Many of these women confuse conflict with intimacy. 5. 6. Seriously though, sex may not be the most important thing in a relationship, but it’s in the top three along with kindness and respect. Small signs of non-physical affection are equally important. Emotionally abusive, NPD/BPD women are rarely affectionate, considerate or generous. What do you think your children are learning by observing mom’s and dad’s relationship dynamics? 8. 10.