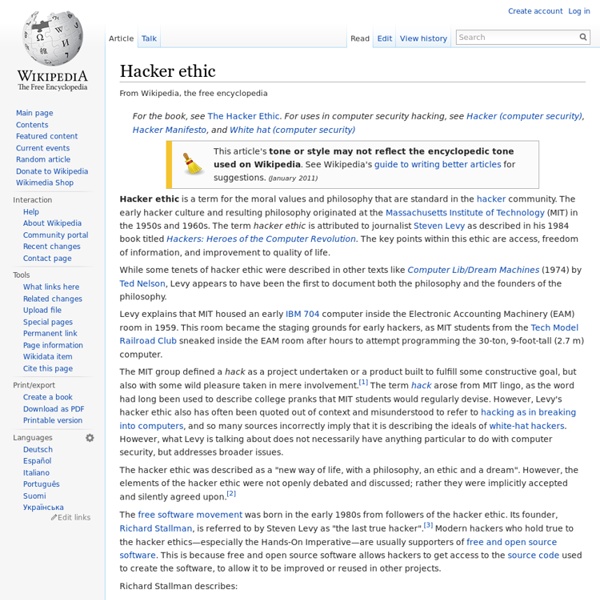 While some tenets of hacker ethic were described in other texts like Computer Lib/Dream Machines (1974) by Ted Nelson, Levy appears to have been the first to document both the philosophy and the founders of the philosophy. Levy explains that MIT housed an early IBM 704 computer inside the Electronic Accounting Machinery (EAM) room in 1959. This room became the staging grounds for early hackers, as MIT students from the Tech Model Railroad Club sneaked inside the EAM room after hours to attempt programming the 30-ton, 9-foot-tall (2.7 m) computer. The hacker ethic was described as a "new way of life, with a philosophy, an ethic and a dream". The free software movement was born in the early 1980s from followers of the hacker ethic. Richard Stallman describes: and states more precisely that hacking (which Stallman defines as playful cleverness) and ethics are two separate issues: Just because someone enjoys hacking does not mean he has an ethical commitment to treating other people properly. Related:  security and hacking • philosophy • security

HackerspaceWiki On Exactitude in Science "On Exactitude in Science" or "On Rigor in Science" (the original Spanish-language title is "Del rigor en la ciencia") is a one-paragraph short story by Jorge Luis Borges, about the map/territory relation, written in the form of a literary forgery. Plot[edit] . . . In that Empire, the Art of Cartography attained such Perfection that the map of a single Province occupied the entirety of a City, and the map of the Empire, the entirety of a Province. In time, those Unconscionable Maps no longer satisfied, and the Cartographers Guilds struck a Map of the Empire whose size was that of the Empire, and which coincided point for point with it. The story elaborates on a concept in Lewis Carroll's Sylvie and Bruno Concluded: a fictional map that had "the scale of a mile to the mile". The Borges story, credited fictionally as a quotation from "Suárez Miranda, Viajes de varones prudentes, Libro IV, Cap. Publication history[edit] The names "B. See also[edit] Simulacra and Simulation References[edit]

80+ Best Free Hacking Tutorials | Resources to Become Pro Hacker Learning to become hacker is not as easy as learning to become a software developer. I realized this when I started looking for learning resources for simple hacking people do. Even to start doing the simplest hack on own, a hacker requires to have in depth knowledge of multiple topics. Some people recommend minimum knowledge of few programming languages like C, Python, HTML with Unix operating system concepts and networking knowledge is required to start learning hacking techniques. Though knowing a lot of things is required, it is not really enough for you to be a competent and successful hacker. If you are thinking about ethical hacking as a career option, you may need to be prepared for a lot of hard/smart work. A lot of people (including me before doing research for this article) think that they can become a hacker using some free hacking tools available on web. Below are some really useful hacking tutorials and resources you may want to explore in your journey of learning to hack

Hauntologists mine the past for music's future You may argue that pop culture has always drawn heavily on nostalgia, and you’d be right, but things have changed. What was once a dim memory, a wobbly VHS tape, a slice of warped vinyl, or a bootleg DVD or CD trading hands amongst enthusiasts has become a towering digital midden so huge that it threatens to impede our view of the future. The growth of online media channels means that the near-entirety of our cultures’ pasts have been excavated and placed on display for anyone to watch, hear, or read in an instant. Hence, hauntology. At the heart of the musical micro-genre of hauntology is the sense of atemporality that underpins our present culture. Whether it’s musicians pastiching multiple vintage styles in a single track, the endless cycle of remakes and sequels in cinema, or historical genre mashups in pop literature, our future is looking increasingly like our past, which now looks like the future, which looks increasingly like the past, and so on. "Haunted, you said?"

How To Become A Hacker Copyright © 2001 Eric S. Raymond As editor of the Jargon File and author of a few other well-known documents of similar nature, I often get email requests from enthusiastic network newbies asking (in effect) "how can I learn to be a wizardly hacker?". Back in 1996 I noticed that there didn't seem to be any other FAQs or web documents that addressed this vital question, so I started this one. If you are reading a snapshot of this document offline, the current version lives at Note: there is a list of Frequently Asked Questions at the end of this document. Numerous translations of this document are available: ArabicBelorussianChinese, Danish, Dutch, Estonian, FrenchGerman, GreekItalianHebrew, Japanese, Lithuanian, Norwegian, PersianPortuguese (Brazilian), RomanianSpanish, Turkish, and Swedish. The five-dots-in-nine-squares diagram that decorates this document is called a glider. If you want to be a hacker, keep reading. 1. 2. 3. 5. 2. 3.

Hacker (programmer subculture) A team of hackers competing in the CTF competition at DEF CON 17 A hacker is an adherent of the subculture that originally emerged in academia in the 1960s, around the Massachusetts Institute of Technology (MIT)'s Tech Model Railroad Club (TMRC)[1] and MIT Artificial Intelligence Laboratory.[2] A hacker is someone who loves to program or who enjoys playful cleverness, or a combination of the two.[3] The act of engaging in activities (such as programming or other media[4]) in a spirit of playfulness and exploration is termed hacking. Richard Stallman explains about hackers who program: What they had in common was mainly love of excellence and programming. The Jargon File, an influential but not universally accepted compendium of hacker slang, defines hacker as "A person who enjoys exploring the details of programmable systems and stretching their capabilities, as opposed to most users, who prefer to learn only the minimum necessary