Lunarium: Discover the Mysteries of the Moon 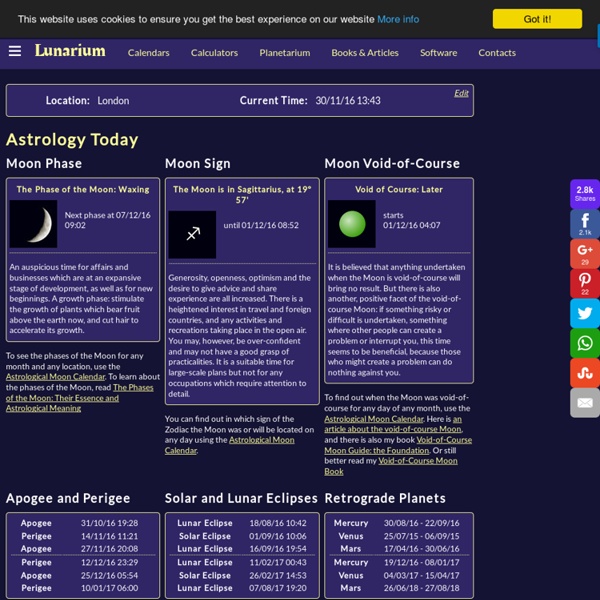 Lilith in Astrology Main Page - Lilith - Essays - Links - Contact Lilith in Astrology Any enthusiast of Lilith will eventually stumble upon the fact that Lilith is also used in some special parts of astrology. Although her myths are a recent addition to astrology, many professionals use Lilith and her three aspects in interpreting client's charts. I will do my best attempt to explain, as there is much conflicting information about the Three Liliths in astrology.

Temple of the Earth and Stars by Oraia Helene Meteor showers are some of my favorite things to watch in the night sky, and are all the more fun since several of them occur on a regular schedule every year. (And one of them is always right around my birthday, which is nice, too!) The word meteor comes from the Greek meteōros, meaning “high in the air” – this is also the root of the word “meteorology,” which is applied to the study of weather rather than the study of meteors. Mercury Retrograde MERCURY RETROGRADE: The purpose of Mercury retrograde is to review and revise our life and our connection with reality. The timing of this universe is geared toward the Sun as it moves through the zodiac. Mercury has an orbit that at times gets ahead of the Sun allowing us to look into the future toward new and innovative ideas.

BLANK ASTROLOGY WHEEL Please feel free to use any of the wheels you see here. At the bottom of the page please find a link to have a FREE Astrology Chart done for those that would rather have that done. It will do it automatically on this page and open to a new page with full chart drawn on it. Also please note that there are some Vedic charts here as well. The Occult - Occultopedia: The Occult and Unexplained Encyclopedia Welcome to Occultopedia, the premier internet index of the paranormal, occult and inexplicable. In addition to being the foremost online destination for information about the supernatural, unusual phenomena and the occult, Occultopedia also features a variety of resources for the pagan community, new age buffs, unexplained phenomena enthusiasts, curious minds, and skeptics as well.Occultopedia is the genuine article, the original and the best internet index of the extraordinary and uncanny, shamelessly copied by many, but never equaled. Online since 1995 — at first in a free web space provider, and in 1997 finally with its own domain name and hosting — Occultopedia still is the principal online resource for those looking for the unexplained, the curious and the unusual. Occultopedia is a work in progress, and is not completed.

Sacred geometry, Metatron's cube and the platonic solids - 3rd Dimension The image you see above is the correct version of "Metatron's Cube", or the fruit of life with the 5 platonic solids. I made it with a 3D program and what you see are the actual edges of the platonic solids. To understand what this is all about to begin with, check out some of our Sacred Geometry links (don't forget to bookmark this page for your convenience!). The dodecahedron and icosahedron actually have their "inner" corner points touching the star tetrahedron that fits in a circle that is = 1/Ø x the circle connecting the corners of the outer cube.

Metatron Metatron Metatron (from Greek Meta+Tron meaning Beyond+Matrix.). Metatron is an angel in Judaism, some branches of Christianity and Islamic tradition Witchcraft. However, there are no references to him in the Jewish Tanakh (Old Testament), the Christian Scriptures (New Testament) or any Islamic source. There is no consensus as to his genesis or the role that he plays in the hierarchy of Heaven and Hell. Metatron's Cube Metatron's Cube Description[edit] The pattern delineated by many of the lines can be created by orthographic projections of the first three Platonic solids. Specifically, the line pattern includes projections of a double tetrahedron (aka stellated octahedron), a cube within a cube (a three-dimensional projection of a tesseract), and an octahedron.

Simplified Scientific Astrology, by Max Heindel, HTML Page 1 of 4 by A Complete Textbook on the Art of Erecting a Horoscope Astrology & the Chakras In this article I would like to explore the exciting possibility of bridging two of history's greatest psychological systems -- astrology and the chakras. Conventionally, these two systems have been seen as having little or nothing to do with each other, the former primarily concerning the outer world, or macrocosm, and the latter involving the inner world, or microcosm. In fact, as we shall soon see, these two systems are but two sides of the same coin, each one complementing the other and thus enhancing our understanding of both. The basic system of correspondences I will be using here is drawn from teachers I have studied with in the Kriya Yoga lineage.1 The general system of "chakric horoscopes" and their guidelines for interpretation are my own, developed over more than a decade of working with these basic correspondences. With that said, let us begin by exploring some of the core ideas of chakric philosophy. What Are the Chakras?