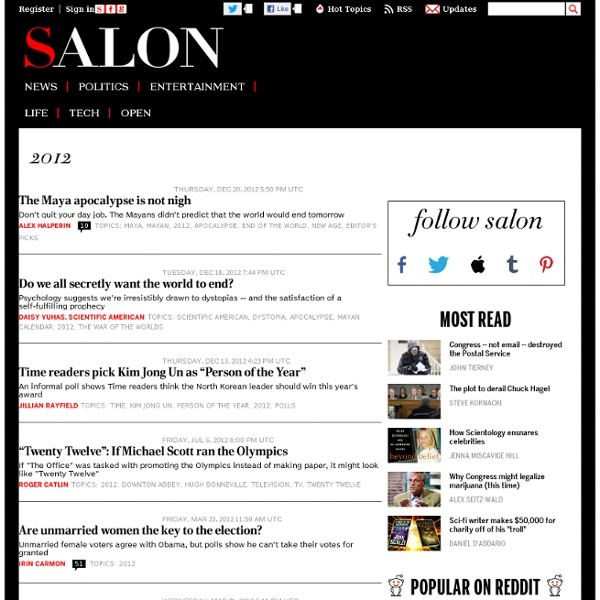 Chris Hadfield ejected from movie theatre for loudly heckling Gravity WATERLOO, ON – Responding to numerous patron complaints, the staff of the Empire Theatres Waterloo reportedly removed famed Canadian astronaut Chris Hadfield after he would not stop heckling a screening of Gravity, the space thriller that has recently dominated the domestic box office. Eyewitnesses reported that during last night’s 9:15pm Real3D screening of Gravity, a lone man (later identified as retired ISS Commander Chris Hadfield) began muttering under his breath and chuckling to himself. By the 30-minute mark, Hadfield reportedly made numerous rude comments such as, “Nice Soyuz procedure, Hollywood!” and “Oh yeah, because that’s what hypoxia as caused by rapid cabin decompression looks like you idiots!.”

Missouri Lieutenant Governor calls for grand jury in Maryville rape case The combined force of Daisy and Melinda Coleman’s refusal to remain silent, Dugan Arnett’s nuanced reporting and the Internet’s collective outrage has pushed Missouri Lieutenant Governor Peter Kinder and other officials to call on the state’s attorney general and Nodaway County Prosecutor Richard Rice to revisit the rape case that has inflamed the nation. Kinder released a statement late Tuesday calling for an investigation into the case, in which Daisy, then only 14-years-old, was allegedly sexually assaulted by football player Matthew Barnett and left — alone, barely conscious and wearing only a T-shirt and sweatpants — on her doorstep on a freezing winter morning. After Daisy and Melinda reported the alleged assault, charges were filed against Barnett, then abruptly dropped without explanation. “I hope that responsible officials will join me in this call for a grand jury to make the final call on whether criminal charges should or should not be filed,” Kinder said in the statement.

Lifehacking is just another way to make us work more Photo by Eric Vidal/Reuters Buzzwords that emerge from Silicon Valley are usually vapid and imprecise. (Let's just agree that “the sharing economy” must become “user-centric,” OK?) Cuba Almost Became a Nuclear Power in 1962 - By Svetlana Savranskaya Cuba would have become the first nuclear power in Latin America 50 years ago, if not for the dynamics captured in this remarkable verbatim transcript -- published here for the first time -- of Fidel Castro's excruciating meeting with Soviet deputy prime minister Anastas Mikoyan, on November 22, 1962. The document comes from the personal archive of his son, the late Sergo Mikoyan, which was donated to the National Security Archive and which appears for the first time in English this month in the new book, The Soviet Cuban Missile Crisis. Long after the world thought the Cuban Missile Crisis had ended, with Soviet leader Nikita Khrushchev's withdrawal of his medium-range nuclear missiles announced on October 28 -- and two days after President John F. Kennedy announced the lifting of the quarantine around Cuba -- the secret crisis still simmered. But Fidel Castro was livid. Castro's mood only got worse.

Why Authoritarians Attack the Arts - NYTimes.com In 1937, ascending leaders of the Third Reich hosted two art exhibitions in Munich. One, the “Great German Art Exhibition,” featured art Adolf Hitler deemed acceptable and reflective of an ideal Aryan society: representational, featuring blond people in heroic poses and pastoral landscapes of the German countryside. The other featured what Hitler and his followers referred to as “degenerate art”: work that was modern or abstract, and art produced by people disavowed by Nazis — Jewish people, Communists, or those suspected of being one or the other. The “degenerate art” was presented in chaos and disarray, accompanied by derogatory labels, graffiti and catalog entries describing “the sick brains of those who wielded the brush or pencil.” Hitler and those close to him strictly controlled how artists lived and worked in Nazi Germany, because they understood that art could play a key role in the rise or fall of their dictatorship and the realization of their vision for Germany’s future.

Golden Ratio On Film: The Math In There Will Be Blood's Cinematography Via i09 Ali Shirazi explores the geometry of Paul Thomas Anderson’s There Will Be Blood, finding the golden spirals, examples of the Rule of Thirds, and tracking shot mathematics describing the film’s cinematography. This is the first in what will be a series of films exploring Anderson’s directing style. It’s a fascinating watch, and it would be interesting to see Shirazi apply similar studies to other directors, examining the math that can be found in the art of filmmaking. Edit: And to see whether his analysis differs with different directors, or if this is just, as many commenters have suggested, an example of golden ratio pareidolia.

Science Reporter Emily Graslie Reads Her Mail — And It's Not So Nice : Krulwich Wonders... I've said it before, so I'll say it again: Emily Graslie's "The Brain Scoop" is one of the warmest, slyest video blogs on the web. She's where I go to find out what museum scientists are up to — and right now she's at the Field Museum in Chicago, where she wanders from department to department, exploring, delighting, asking questions that you and I would ask if someone gave us a free pass to gawk our way through one of the great natural history museums in the world. So I was more than a little surprised to catch her recent post, a meditation on the mail she gets. It turns out her mail is, well, troubling. Many of the folks who write her, write not about the science, but about her body, her looks, her clothes, and do so without any apparent embarrassment. She's a science reporter who happens to be a young woman, and her woman-ness is the thing they focus on.

Why Mission Statements Are BS According to Wikipedia, a mission statement is intended to "guide the actions of the organization, spell out its overall goal, provide a path, [and] the framework or context within which the company's strategies are formulated." Most companies have one, but they're all a waste of time and mental energy. Here's why: 1. They're group-written.

Pentagon Estimated 18,500 U.S. Casualties in Cuba Invasion 1962, But If Nukes Launched, "Heavy Losses" Expected The Pentagon during the Cuban Missile Crisis Part I. New Documents Washington, DC, October 16, 2012 – Fifty years after President Kennedy considered invading Cuba to take out Soviet missiles during the Cuban Missile Crisis, newly declassified Pentagon documents published today by the National Security Archive (www.nsarchive.org) describe the potentially catastrophic risks of the invasion including 18,500 American casualties in the first 10 days, even without any nuclear explosions. U.S. intelligence had detected at least one nuclear-capable short-range nuclear weapon launcher (the Luna/Frog) with the Soviet troops in Cuba, so Joint Chiefs chairman Gen. Maxwell Taylor told President Kennedy - in a crucial November 2, 1962 memorandum published here for the first time - that U.S. invasion plans were "adequate and feasible" as long as no battlefield nuclear weapons came into play.

‘The Painting Must Go’: Hannah Black Pens Open Letter to the Whitney About Controversial Biennial Work Parker Bright protesting Dana Schutz’s Open Casket. Despite initially receiving semi-positive notices, mainly from white critics, a Dana Schutz painting in the Whitney Biennial generated controversy this weekend. This past Saturday, the artist Parker Bright held a protest in front of the work, which is titled Open Casket and depicts an abstracted version of the famed photograph of Emmett Till’s open-casket funeral.