Here is a brief look into Sudan’s journey to the elections amid on-going conflict and hostility.

South Sudan calls off elections:Saturday 14 February 2015. South Sudan's President Salva Kiir Mayardit attends the opening ceremony of the 24th Ordinary session of the Assembly of Heads of State and Government of the African Union (AU) at the African Union headquarters in Ethiopia's capital Addis Ababa. 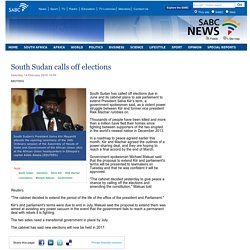 (REUTERS) South Sudan has called off elections due in June and its cabinet plans to ask parliament to extend President Salva Kiir's term, a government spokesman said, as a violent power struggle between Kiir and former vice president Riek Machar rumbles on. Thousands of people have been killed and more than a million have fled their homes since fighting between supporters of the two erupted in the world's newest nation in December 2013. In a roadmap to peace agreed earlier this month, Kiir and Machar agreed the outlines of a power-sharing deal, and they are hoping to reach a final accord by the end of March. 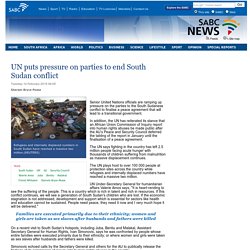 (REUTERS) Senior United Nations officials are ramping up pressure on the parties to the South Sudanese conflict to finalise a peace agreement that will lead to a transitional government. In addition, the UN has reiterated its stance that an African Union Commission of Inquiry report into human rights abuses be made public after the AU’s Peace and Security Council deferred the tabling of the report in January until the finalisation of a peace agreement.

The UN says fighting in the country has left 2.5 million people facing acute hunger with thousands of children suffering from malnutrition as massive displacement continues. The UN plays host to over 100 000 people at protection sites across the country while refugees and internally displaced numbers have reached a massive two million. The UN’s special envoy for peace and reconciliation actor Forest Whitaker called for parties to lay down their arms. S Sudan conflict could cost $53bn: Report:Thursday 15 January 2015. More than 10 000 people have died since the war broke out in South Sudan in December 2013(REUTERS) A report indicates the South Sudan conflict could cost the region up to $53 billion if it prolongs to five years. 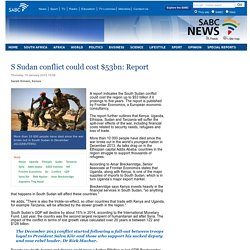 The report is published by Frontier Economics, a European economic consultancy. The report further outlines that Kenya, Uganda, Ethiopia, Sudan and Tanzania will suffer the spill-over effects of the war, including financial costs related to security needs, refugees and loss of trade. More than 10 000 people have died since the war broke out in the world’s youngest nation in December 2013. As talks drag on in the Ethiopian capital Addis Ababa, countries in the region struggle to support thousands of refugees. According to Amar Breckenridge, Senior Associate at Frontier Economics states that Uganda, along with Kenya, is one of the major supplies of imports to South Sudan, which is in turn Uganda’s major export market. South Sudan peace talks adjourn without agreement:Friday 6 March 2015. South Sudan's President Salva Kiir, left, and South Sudan's rebel commander Riek Machar exchange documents (REUTERS) Peace talks between South Sudan's government and rebels adjourned on Friday and there was no date set for the next meeting, a mediation official said. 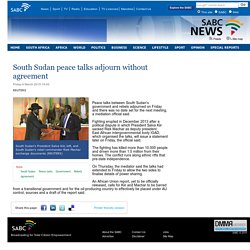 Fighting erupted in December 2013 after a political dispute in which President Salva Kiir sacked Riek Machar as deputy president. East African intergovernmental body IGAD, which organised the talks, will issue a statement later on Friday, the official said. The fighting has killed more than 10,000 people and driven more than 1.5 million from their homes. The conflict runs along ethnic rifts that pre-date independence. UN establishes sanctions for South Sudan :Tuesday 3 March 2015. Ambassador Francis Deng says it is important to ask whether sanctions are a punishment for failure to make peace or an inducement for peace. 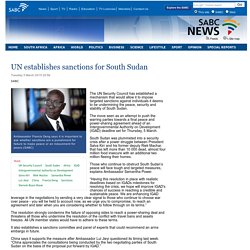 (SABC) The UN Security Council has established a mechanism that would allow it to impose targeted sanctions against individuals it deems to be undermining the peace, security and stability of South Sudan. The move seen as an attempt to push the warring parties towards a final peace and power-sharing agreement ahead of an Intergovernmental Authority on Development (IGAD) deadline set for Thursday, 5 March. South Sudan was plummeted into a security crisis after a power struggle between President Salva Kirr and his former deputy Riek Machar, that has left more than 10 000 dead, almost four million food insecure with an additional two million fleeing their homes.

Talks to pull out troops from Sudan resume :Wednesday 18 March 2015. Sudan summons EU envoy over election remarks:Friday 10 April 2015. President Omar Hassan al-Bashir looks set to extend his 25 years in power(REUTERS) Sudan's Foreign Ministry said on Friday it had summoned the European Union's representative in Khartoum over critical EU remarks about the country's political environment ahead of elections next week. 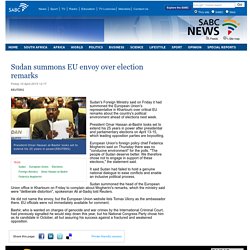 President Omar Hassan al-Bashir looks set to extend his 25 years in power after presidential and parliamentary elections on April 13-15, which leading opposition parties are boycotting. European Union's foreign policy chief Federica Mogherini said on Thursday there was no "conducive environment" for the polls. "The people of Sudan deserve better. We therefore chose not to engage in support of these elections," the statement said. It said Sudan had failed to hold a genuine national dialogue to ease conflicts and enable an inclusive political process.