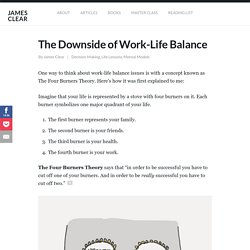 Here's how it was first explained to me: Imagine that your life is represented by a stove with four burners on it. Each burner symbolizes one major quadrant of your life. The first burner represents your family.The second burner is your friends.The third burner is your health.The fourth burner is your work. Forget Work-Life Balance. The Question is Rest Versus Effort. Work penetrates every aspect of our life, so how do you strike a work-life balance? 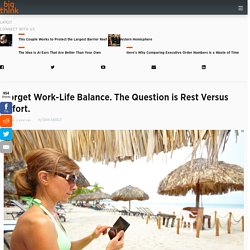 Personally, I’m terrible at it. I have absolutely no balance. My life and my work life are one in the same. I think about experiments every time I meet people. I do experiments all the time. I also think we don’t know a lot about it. So, I think the question maybe is not so much work-life balance, but the question is rest versus effort. And that I think is a very interesting and very tricky question because we have what we call a present bias focus. And I suspect that one answer to this is the calendar. But the calendar application doesn’t represent this tradeoff. In Their Own Words is recorded in Big Think's studio. Underachiever? Overachiever? Find the Right Balance. No, You Don’t Have to Work 24/7 to Succeed - Michael Hyatt.

I love Amazon, but like many I was disturbed by what I read in the New York Times’ recent exposé. 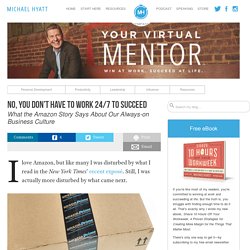 Still, I was actually more disturbed by what came next. Courtesy of iStock/NoDerog I read defenses of Amazon from entrepreneurs, leaders, tech writers, and others. Some were easy to agree with. It’s a free country, after all. That wasn’t the problem. What bothered me was the widely held assumption that this kind of environment is necessary for profitable, competitive companies—as if entrepreneur were just another word for workaholic. Can we just label this what it is? Winning at Work and Succeeding at Life Anyone who knows me, reads this blog, or listens to my podcast knows I’ve always been a high-achiever. I’ve also made a lot of sacrifices at the expense of my family and health over the years. On Being Too Much for Ourselves: Psychoanalyst Adam Phillips on Balance and the Necessary Excesses of Life.

By Maria Popova “There are situations in which it is more dangerous to keep your balance than to lose it.” 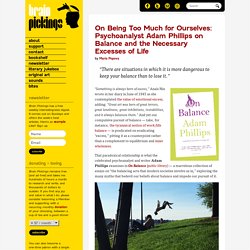 “Something is always born of excess,” Anaïs Nin wrote in her diary in June of 1945 as she contemplated the value of emotional excess, adding: “Great art was born of great terrors, great loneliness, great inhibitions, instabilities, and it always balances them.”

The Wheel of Life. Zones. Time Balance. Environment Design. Relationship With Others. Unbalance. David Whyte on How to Break the Tyranny of Work/Life Balance. The equilibrium between productivity and presence is one of the hardest things to master in life, and one of the most important. 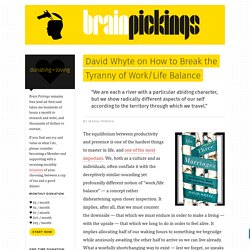 We, both as a culture and as individuals, often conflate it with the deceptively similar-sounding yet profoundly different notion of “work/life balance” — a concept rather disheartening upon closer inspection. It implies, after all, that we must counter the downside — that which we must endure in order to make a living — with the upside — that which we long to do in order to feel alive. It implies allocating half of our waking hours to something we begrudge while anxiously awaiting the other half to arrive so we can live already. What a woefully shortchanging way to exist — lest we forget, so speaks Annie Dillard: “How we spend our days is, of course, how we spend our lives.” Poets have never used the word balance, for good reason. In a passage that calls to mind Wendell Berry’s glorious meditation on solitude, Whyte details the trifecta of his inquiry: How to make work-life balance work [ TED Talk : Nigel Marsh ] Prioritize Your Life Before Your Manager Does It for You.

In their several years of working together, Jin-Yung had never really negotiated with her manager. 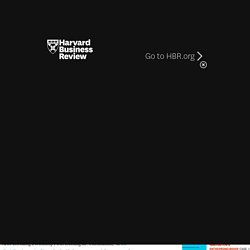 She would simply say yes even if it threw her life into temporary turmoil, as it often did. She had given unknowable hours to executing every request and task, diligently delivering them in neat and complete packages, no matter the sacrifice. After attending a workshop I was teaching on “essentialism,” or the disciplined pursuit of less, she decided to create a social contract to draw some boundaries at work. Specifically, it outlined how she could increase her productivity at work while also having five days off of work to focus entirely on preparing for her upcoming wedding. Jin-Yung’s manager agreed to the terms she presented and was surprised and delighted when she put in several especially-focused days and completed her usual work ahead of schedule.

At first, her boss was fuming. Rule 1: You can’t negotiate if you don’t know what you want. How To Achieve Work-Life Balance In 5 Steps. Achieving work-life balance can look impossible. 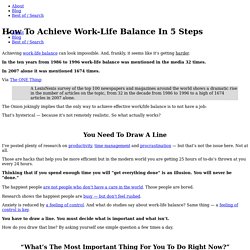 And, frankly, it seems like it’s getting harder. In the ten years from 1986 to 1996 work-life balance was mentioned in the media 32 times. In 2007 alone it was mentioned 1674 times. Via The ONE Thing: A LexisNexis survey of the top 100 newspapers and magazines around the world shows a dramatic rise in the number of articles on the topic, from 32 in the decade from 1986 to 1996 to a high of 1674 articles in 2007 alone. Group Performance. Burn-out. WorkLife with Adam Grant by TED Talks on Apple Podcasts.