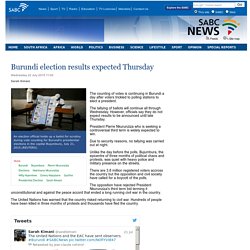 (REUTERS) The counting of votes is continuing in Burundi a day after voters trickled to polling stations to elect a president. The tallying of ballots will continue all through Wednesday. However, officials say they do not expect results to be announced until late Thursday. President Pierre Nkurunziza who is seeking a controversial third term is widely expected to win. Due to security reasons, no tallying was carried out at night. Unlike the day before the polls, Bujumbura, the epicentre of three months of political chaos and protests, was quiet with heavy police and military presence on the streets. There are 3.8 million registered voters accross the country but the opposition and civil society have called for a boycott of the polls. The United Nations has warned that the country risked returning to civil war.

Burundi talks suspended ahead of polls after government fails to show:Sunday 19 July 2015. The looming presidential elections were likely to trigger major instability and clashes which could spread across borders(REUTERS) Peace talks to resolve Burundi's violent political crisis ahead of polls next week were suspended on Sunday after the government side failed to show up, the mediator said. 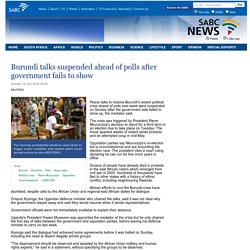 The crisis was triggered by President Pierre Nkurunziza's decision to stand for a third term in an election due to take place on Tuesday. The move sparked weeks of violent street protests and an attempted coup in mid-May. Medical charity laments Burundi refugee crisis :Wednesday 22 July 2015. Doctors Without Borders has warned that acute child malnutrition cases in the camp on the border of Tanzania and Burundi are reaching critical levels. 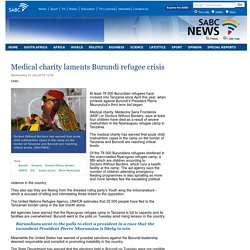 (REUTERS) At least 78 000 Burundian refugees have crossed into Tanzania since April this year, when protests against Burundi's President Pierre Nkurunziza's third term bid began. Medical charity, Médecins Sans Frontières (MSF) or Doctors Without Borders, says at least four children have died as a result of severe malnutrition in the Nyaraugusu refugee camp in Tanzania. 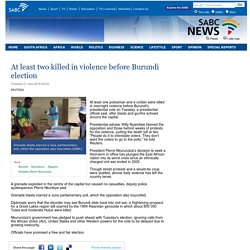 (SABC) At least one policeman and a civilian were killed in overnight violence before Burundi's presidential vote on Tuesday, a presidential official said, after blasts and gunfire echoed around the capital. . Presidential adviser Willy Nyamitwe blamed the opposition and those behind weeks of protests for the violence, putting the death toll at two. "People do it to intimidate voters. They don't want the voters to go to the polls," he told Reuters. Blasts, gunshots heard ahead of Burundi poll results:Wednesday 1 July 2015. 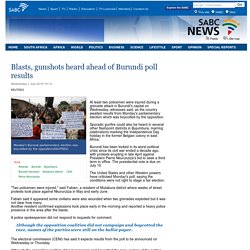 Sporadic gunfire could also be heard in several other flashpoint districts in Bujumbura, marring celebrations marking the Independence Day holiday in the former Belgian colony in east Africa. Burundi has been locked in its worst political crisis since its civil war ended a decade ago, with protests erupting in late April against President Pierre Nkurunziza's bid to seek a third term in office. The presidential vote is due on July 15. The United States and other Western powers have criticised Monday's poll, saying the conditions were not right to stage a fair election. Fabien said it appeared some civilians were also wounded when two grenades exploded but it was not clear how many. ‘Environment in Burundi not conducive for credible elections’:Monday 22 June 2015. Burundi has been thrown into violence following Nkurunziza’s bid for a third term in office. 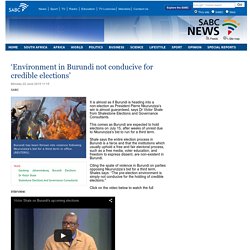 (REUTERS) It is almost as if Burundi is heading into a non-election as President Pierre Nkurunziza’s win is almost guaranteed, says Dr Victor Shale from Shalestone Elections and Governance Consultants. This comes as Burundi are expected to hold elections on July 15, after weeks of unrest due to Nkurunziza's bid to run for a third term. Shale says the entire election process in Burundi is a farce and that the institutions which usually uphold a free and fair electoral process, such as a free media, voter education, and freedom to express dissent, are non-existent in Burundi. 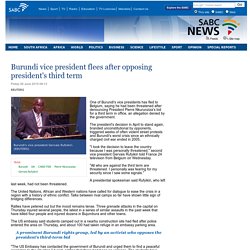 (REUTERS) One of Burundi's vice presidents has fled to Belgium, saying he had been threatened after denouncing President Pierre Nkurunziza's bid for a third term in office, an allegation denied by the government. The president's decision in April to stand again, branded unconstitutional by opponents, triggered weeks of often violent street protests and Burundi's worst crisis since an ethnically charged civil war ended in 2005. "I took the decision to leave the country because I was personally threatened," second vice president Gervais Rufyikiri told France 24 television from Belgium on Wednesday.

"All who are against the third term are threatened. A presidential spokesman said Rufyikiri, who left last week, had not been threatened. The United Nations, African and Western nations have called for dialogue to ease the crisis in a region with a history of ethnic conflict. Rallies have petered out but the mood remains tense. Burundi opposition parties to boycott elections:Friday 26 June 2015. The dispute has plunged the poor African nation into crisis. 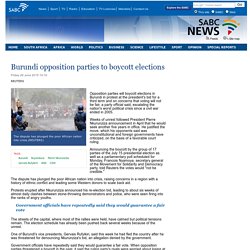 (REUTERS) Opposition parties will boycott elections in Burundi in protest at the president's bid for a third term and on concerns that voting will not be fair, a party official said, escalating the nation's worst political crisis since a civil war ended in 2005. Weeks of unrest followed President Pierre Nkurunziza announcement in April that he would seek another five years in office.

He justified the move, which his opponents said was unconstitutional and foreign governments have criticized, on the basis of a favorable court ruling. Announcing the boycott by the group of 17 parties of the July 15 presidential election as well as a parliamentary poll scheduled for Monday, Francois Nyamoya, secretary general of the Movement for Solidarity and Democracy party, told Reuters the votes would "not be credible. 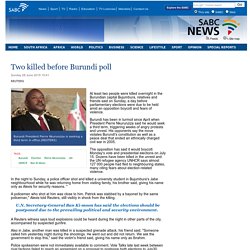 (REUTERS) At least two people were killed overnight in the Burundian capital Bujumbura, relatives and friends said on Sunday, a day before parliamentary elections were due to be held amid an opposition boycott and fears of violence. Burundi Speaker on the run: French TV:Sunday 28 June 2015. Burundi National Assembly Speaker Pie Ntavyohanyuma says he was forced to his country due to the unrest there. 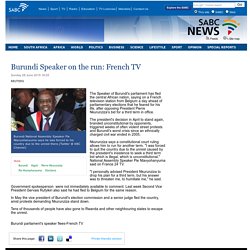 (Twitter @ KBC Channel) The Speaker of Burundi's parliament has fled the central African nation, saying on a French television station from Belgium a day ahead of parliamentary elections that he feared for his life, after opposing President Pierre Nkurunziza's bid for a third term in office. The president's decision in April to stand again, branded unconstitutional by opponents, triggered weeks of often violent street protests and Burundi's worst crisis since an ethnically charged civil war ended in 2005. Nkurunziza says a constitutional court ruling allows him to run for another term. "I was forced to quit the country due to the unrest caused by the president's insistence to seek a third term bid which is illegal, which is unconstitutional," National Assembly Speaker Pie Ntavyohanyuma said on France 24 TV.

Government spokesperson were not immediately available to comment. AU says Burundi election will not be free or fair, speaker flees:Monday 29 June 2015. Officials of Burundi's National Electoral Commission take stock of electoral material for the upcoming parliamentary elections at a warehouse in the neighbourhood of Nyakabiga near the capital Bujumbura, June 28, 2015. (REUTERS) The African Union stood down its election observers in Burundi on Sunday, saying Monday's parliamentary election would be neither free nor fair, as the speaker of parliament said he had fled after being threatened and heavy gunfire echoed across the capital.

Residents of the capital Bujumbura reported hearing the sound of grenade explosions and heavy machinegun fire in northern and southern districts, after a night in which at least three people were killed.