One sentence that perfectly explains how out of control money in American politics is. Programmer under oath admits computers rig elections. What Corruption Looks Like: 87% Of Congressional Reps Supporting Comcast/NBC Merger Got Money From Comcast. Let me start out by pointing out that I'm on the record thinking that people are severely overreacting to the Comcast/NBC merger. 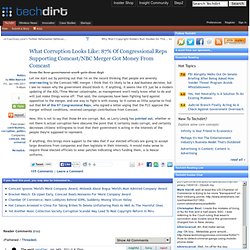 I think that it's likely to be a bad business decision, but I see no reason why the government should block it. If anything, it seems like it'll just be a modern updating of the AOL/Time Warner catastrophe, as management won't really know what to do and will just make things worse off. That said, the companies have been fighting hard against opposition to the merger, and one way to fight is with money. American Politics Unveiled. Campaign Cash: Corporations Get More Power, Political Parties Get Less.

By Zach Carter, Media Consortium blogger War chests from right-wing billionaires and corporate titans are funding tremendous portions of political activity, from the so-called grassroots activism of the Tea Party to the streamlined lobbying assaults of the nation's largest corporations. 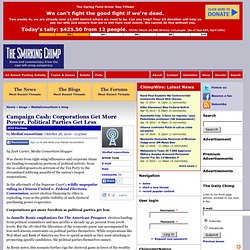 In the aftermath of the Supreme Court's wildly unpopular ruling in Citizens United v. Federal Elections Commission, secret election financing by elites is exploding, even as the public visibility of such electoral purchasing power evaporates. Corporations get more freedom as political parties get less As Jamelle Bouie emphasizes for The American Prospect, election funding from political committees and non-profits is already up 40 percent from 2008 levels. 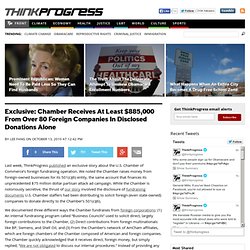 Chamber of Commerce’s foreign fundraising operation. We noted the Chamber raises money from foreign-owned businesses for its 501(c)(6) entity, the same account that finances its unprecedented $75 million dollar partisan attack ad campaign. Tea Party ‘founder’: Palin, Gingrich a ‘joke’ By Daniel TencerWednesday, October 20, 2010 22:46 EDT A financial blogger and ex-CEO credited with being one of the original “founders” of the Tea Party has come out against the movement, saying it has been hijacked by the very people it was protesting and is now obsessed with “guns, gays and God.” 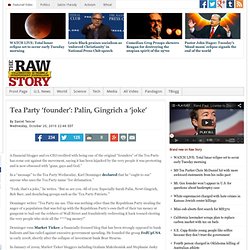 In a “message” to the Tea Party Wednesday, Karl Denninger declared that he “ought to sue” anyone who uses the Tea Party name “for defamation.” “Yeah, that’s a joke,” he writes. 'Independent' Groups Behind Ads Not So Independent. Koch Footprints Lead to Political Powder Keg: Exposing the Far Right's Secret Slush Fund to Keep Fear Alive. October 27, 2010 | Like this article? 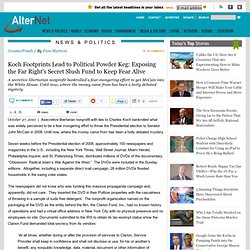 Join our email list: Stay up to date with the latest headlines via email. Asecretive libertarian nonprofit with ties to Charles Koch bankrolled what was widely perceived to be a fear mongering effort to throw the Presidential election to Senator John McCain in 2008. Until now, where the money came from has been a hotly debated mystery. Seven weeks before the Presidential election of 2008, approximately 100 newspapers and magazines in the U.S., including the New York Times, Wall Street Journal, Miami Herald, Philadelphia Inquirer, and St. Big Oil spends $69.5m on ads to get the Congress it wants. The next Congress is expected to throw up a whole new set of roadblocks to Barack Obama's environmental agenda - from time-consuming investigations to budget cuts. 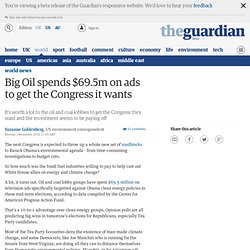 So how much was the fossil fuel industries willing to pay to help cast out White House allies on energy and climate change? A lot, it turns out. Oil and coal lobby groups have spent $69.5 million on television ads specifically targetted against Obama clean energy policies in these mid-term elections, according to data compiled by the Center for American Progress Action Fund. That's a 10-to-1 advantage over clean energy groups. Opinion polls are all predicting big wins in tomorrow's elections for Republicans, especially Tea Party candidates. Most of the Tea Party favourites deny the existence of man-made climate change, and some Democrats, like Joe Manchin who is running for the Senate from West Virginia, are doing all they can to distance themselves from Democratic environmental policies. How Republicans and Their Big Business Allies Duped Tens of Millions of Evangelicals into Voting for a Corporate Agenda. November 9, 2010 | Like this article? 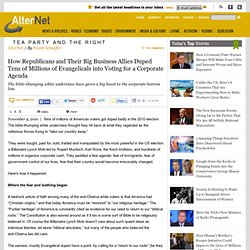 Join our email list: Stay up to date with the latest headlines via email. Tens of millions of American voters got duped badly in the 2010 election. The bible-thumping white underclass thought they hit back at what they regarded as the nefarious forces trying to “take our country away.” They were bought, paid for, sold, traded and manipulated by the most powerful in the US election: a Billionaire Lynch Mob led by Rupert Murdoch, Karl Rove, the Koch brothers, and hundreds of millions in organize corporate cash.